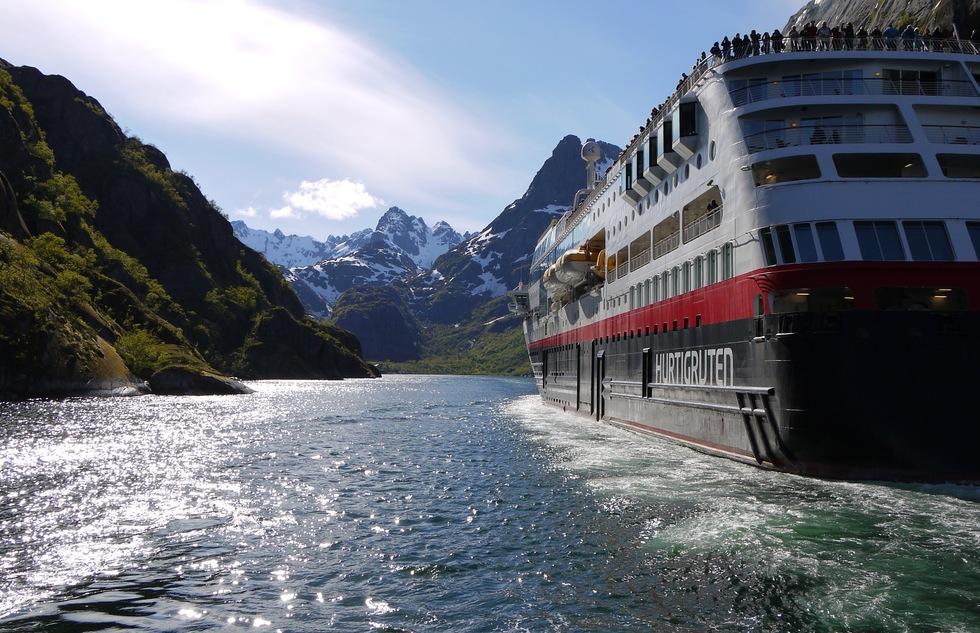 Don't sleep on Hurtigruten! The Norwegian ship line has been doing everything it can to become a household name outside of Norway, and not even the pandemic is slowing the effort down.

The company (which used to have the ho-hum name of Norwegian Coastal Voyages) was once focused on providing comfortable overnight ferry service up and down the Norwegian coast—in fact, it's been doing that for 127 years.

For a while, it was a minor travel secret that non-Norwegians could purchase comfortable, upscale cabins to ride along. It was an ideal way to see the fjords, which would otherwise be too difficult or expensive to do with self-arranged transportation.

Then the company began improving its ships (which generally carry just 400–700 passengers) to the point where you'd forget you were sharing space with domestic commuters. The line added Science Centers for studying local Nordic nature, upgraded cabins, and made sure dining options met international standards.

Now, you don't even have to fly all the way to Norway to take one of Hurtigruten's voyages to see the Northern Lights or the fjords. The company announced that as of next year, 2021, it will add "expedition cruise" departures from the United Kingdom (Dover, 68 miles from London) and Germany (Hamburg), making it much easier to tack a trip to see the aurora borealis on an existing European vacation. A new set of departures from Bergen, Norway, will debut as well.

Here's how the company is describing its new 13- and 15-day itineraries:

"From Hamburg, the fully upgraded MS Otto Sverdrup (current MS Finnmarken), will take guests on two different summer and winter itineraries to the North Cape and back. Maximizing time above the Arctic circle during the winter means guests can enjoy spectacular Northern Lights, while tender pits and small boats mean guests can explore off-the-beaten track destinations year-round—in addition to favorites such as Lofoten and Norwegian fjords.

"From Dover, MS Maud (current MS Midnatsol) will offer guests a special winter itinerary, maximizing time above the Arctic circle to enjoy spectacular northern lights—including an overnight stay in Tromsø. During the summer months, Hurtigruten’s Norway expedition cruises will take guests to North Cape and back, exploring fjords, mountains and the Lofoten Islands. In addition, Hurtigruten offers two brand new summer itineraries from Dover: One exploring the British Isles, the other to off-the-beaten-track destinations in Southern Scandinavia.

"From Bergen, Hurtigruten will offer year-round departures with MS Trollfjord, one of the most popular ships in Hurtigruten’s fleet. Sailing directly from the fjord capital of Bergen, MS Trollfjord will maximize the time spent exploring the Norwegian coastline to North Cape and back, including off-the-beaten-track destinations such as Reine in Lofoten, Fjærland and Træna."

Prices have not yet been released; reservations go on sale in late June 2020.

The ships are being upgraded, but you can take a photo tour of what a Hurtigruten vacation was like before renovations by clicking here.