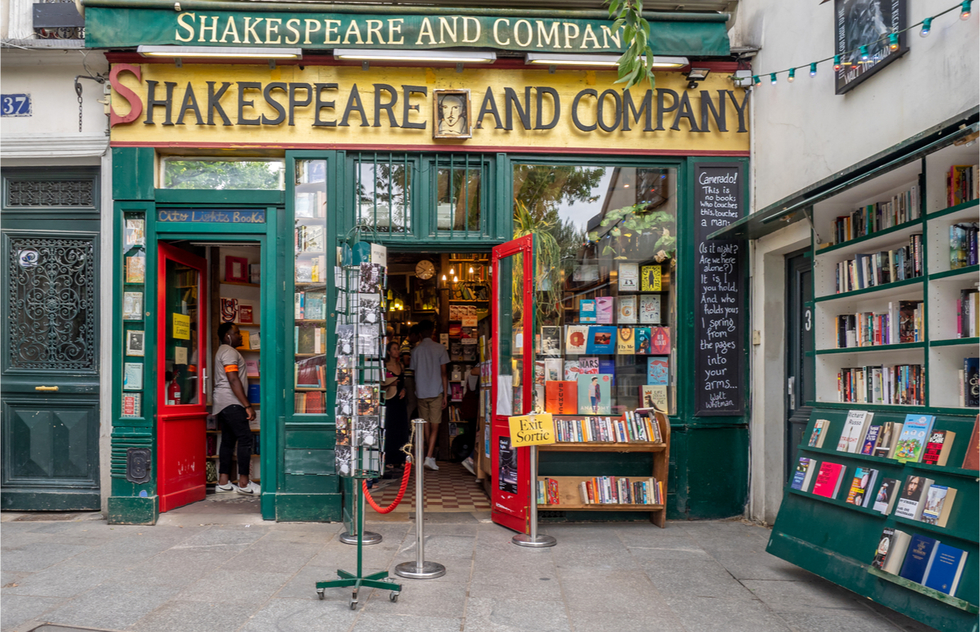 The bookstore beloved by the Lost Generation is now in danger of being lost itself.

Shakespeare and Company was founded in Paris by Sylvia Beach just after World War I. Specializing in literature in English, the shop and lending library became a gathering place for American literary superstars living in Paris between the two world wars.

Poets such as T.S. Eliot and Ezra Pound as well as novelists including Ernest Hemingway, F. Scott Fitzgerald, Gertrude Stein, and James Joyce were all part of the store's creative community. Hemingway mentions Shakespeare and Company several times in A Moveable Feast, his memoir of the Paris years, and Beach was the first to publish Joyce's Ulysses in full after the book had been banned elsewhere.

In later years, the store changed hands and moved to its current spot right across the Seine from Notre-Dame. Writers kept coming: Henry Miller, James Baldwin, Anaïs Nin, and Allen Ginsberg were among those who could be seen sipping tea with the owners among the maze of bookshelves.

While you were far more likely to bump into a tourist than a famous author here by early 2020, the store retained a bohemian spirit thanks to the staff, many of whom were nomadic young people—they call themselves "tumbleweeds"—who traded a few hours of work each day for the right to sleep in the back rooms at night. More than 30,000 temporary workers have lived in the store over the years.

Of course, commercial activity came to a screeching halt in March 2020, when Covid-19 closings caused an 80% drop in sales, according to the bookstore's website.

In response, the store created a membership program akin to Beach's survival strategy during the Great Depression. (And that earlier effort sounds like the book group to end all book groups. "In exchange for an annual fee," says the Shakespeare and Company site, "participants were invited to members-only readings with T. S. Eliot, André Gide, Paul Valéry, and even Ernest Hemingway, who made an exception to his rule against public events.")

Despite the fundraising push, current owner Sylvia Whitman sent out an SOS email on October 28, pleading for online orders and other forms of financial support.

"We’re not closing our doors, but we’ve gone through all of our savings," Whitman told The Guardian.

Seeking the public's support seems to have helped. In a tweet dated November 12, the store writes, "2 weeks ago we told you sales were 80% down & you lovely folk responded so hugely you crashed our site!"

2 weeks ago we told you sales were 80% down & you lovely folk responded so hugely you crashed our site! Today we launch a new way to support us, giving access to exclusive content & the chance to get one-off artwork from @neilhimself and Dave Eggers. More: https://t.co/uxdU6ORbKE pic.twitter.com/nCqhlTBXU6

So many online orders came in, as a matter of fact, that the store has had to stop accepting them temporarily in order to catch up. An announcement on the business's website advises customers that new online orders will likely be accepted again starting December 1.

In the meantime, the membership program has some enticing new offerings for those who join, including exclusive content donated by famous writers. Join at the €500 ($590) level by November 15 and you'll get a portrait sketch of yourself or a loved one by Dave Eggers or a doodle by Neil Gaiman.

It seems like every other day now we're hearing about another iconic independent bookstore that's on shaky ground. New York City's Strand bookstore and London's historic Stanfords are among those needing help.

To hear that Shakespeare and Company, a place that had lines out the door before the pandemic, is in similar trouble is a shocker. If the store dies, the world will lose an important site of literary history. To stop that from happening, consider making a donation or joining the membership program at FriendsofShakespeareandCompany.com.

And while you're at it, check out our feature on how to support 25 more independent bookstores we love.