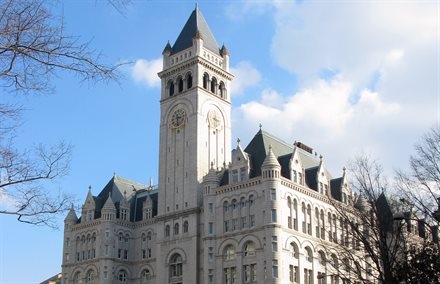 In Washington, DC, a luxury hotel is set to open today in the Old Post Office Pavilion, following a $200 million renovation of the historic building, which was constructed in 1899.

But the idea of staying there might be a nonstarter for many travelers—and not just because the lowest rates are $950 per night.

Given the especially polarized state of the populace during this election year, there are signs that a sizable chunk of vacationers are opting not to stay at properties bearing the Republican nominee's name.

Because the high-end hotel chain is part of a privately held company, its finances don't have to be made available to the public. So it's not possible to say for sure that the hotels have lost money this year.

But the booking site Hipmunk says that its reservations for Trump hotels are down 60% compared with 2015; experts consulted by the Boston Globe estimate a drop of at least 30%; and in a survey conducted by travel-industry website Skift, 57% of respondents said they were less likely to stay in a Trump hotel after his campaign.

What the hotels do have going for them: high marks for quality from the press and the possibility that well-heeled Trump fans might be more inclined to stay at one of them to show their support.