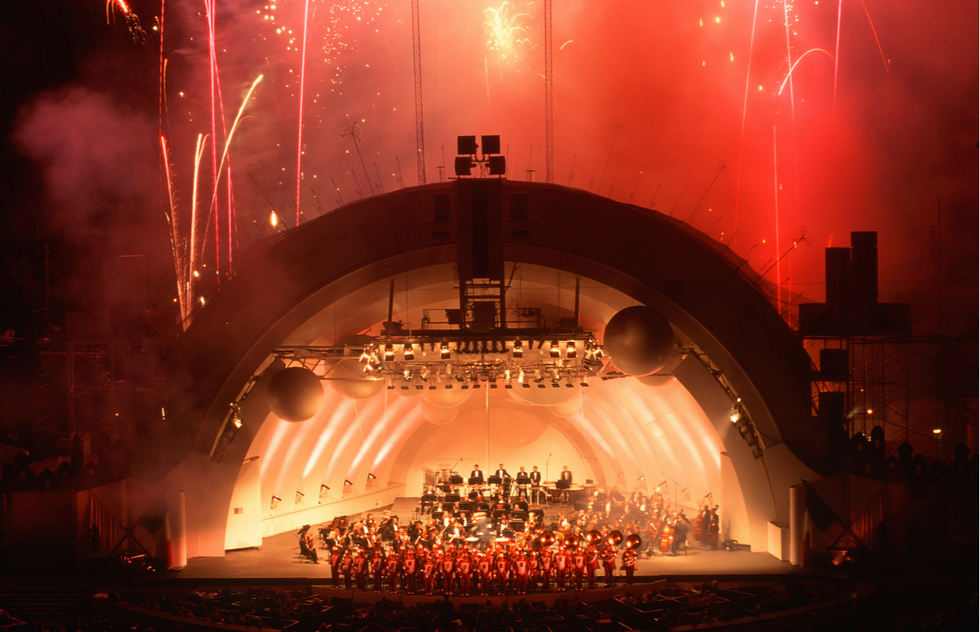 For the first time in 98 years, there will be no concerts this summer at the Hollywood Bowl in Los Angeles.

The Greek-style outdoor amphitheater, set in a canyon in the Hollywood Hills, is the summer home of the Los Angeles Philharmonic orchestra. But the venue also hosts an array of performances in a number of music genres—classical, jazz, pop, soul, rock, country, and many more—as well as film screenings, fireworks displays (like the one pictured above), and other special events.

This year's opening night headliner was slated to be Brandi Carlile on June 13.

But in a notice posted on its website yesterday, the Hollywood Bowl announced that the entire season, scheduled to last through late September, has been canceled "in response to the latest guidance of public health officials and in an effort to protect our artists, audiences, staff, and community from the spread of Covid-19."

The statement described the decision as "painful," a sentiment shared by the Los Angeles Times, which published a lamentation that reads like an obituary for summer in L.A.

It's true that for locals and visitors alike, the Hollywood Bowl is an essential component of the season.

As Frommer's one-day itinerary for the city puts it, "Watching a live performance under the stars on a warm summer night while noshing on crackers, cheese, and wine" is "one of L.A.'s grandest traditions."

Los Angeles County extended its stay-at-home order by another three months this week, though restrictions on outdoor recreation have been eased and some beaches have been partially reopened.

Ticket holders for this summer's performances at the Hollywood Bowl can request a refund or get a credit for a future event by emailing information@laphil.org or calling 323/850-2000. You can also donate your tickets—the Hollywood Bowl is managed by the LA Phil, a nonprofit arts organization that could certainly use the help right now.