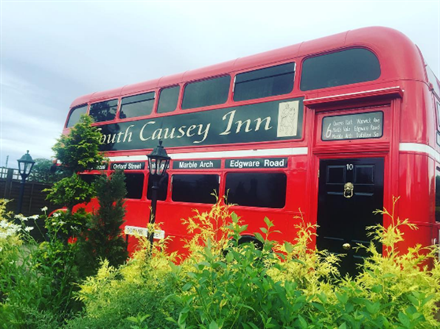 Let's say you want to sleep inside an iconic symbol of London.

The royal residences are likely out of the question, until you can get Prince Harry to return your calls. And there's probably a night watchman at the British Museum to expel you if you linger past closing.

A better alternative: spend the night in a classic red double-decker bus that's been converted into a swanky hotel room.

That's the offer on the table at the South Causey Inn in County Durham, England, where owners Susan and Philip Mosier have turned a 1960s-era London bus into a luxurious—though somewhat cramped—two-story accommodation with one bedroom, a living room, a large bathroom, and even a hot tub out back.

As you can imagine, the interior had to be gutted, but a few of the vehicle's original features remain, including the steering wheel and some seats.

Of course, for a lot less you could always buy tickets for one of London's myriad double-decker bus tours and just sleep through that.