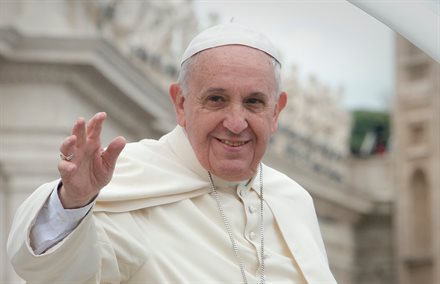 That's the highlight of a showstopping offering from luxury travel service If Only—part of a trip to Italy that will set you back $25,000 (well, actually, it'll cost you more than that since airfare isn't included).

The confab with his Holiness will take place during something called the Killerspin World UnPlugNPlay Festival, a six-day event filled with ping-pong tournaments and technology talks being held at the Vatican starting on August 29.

So, wait: there's gonna be ping-pong, too? Yet ANOTHER showstopping highlight!

The trip will also include a private tour of the Vatican and a three-day stay at a resort in Sardinia following the festival.

And don't worry: the Pope has a good reason for turning himself into a travel perk. Every penny of the $25,000 that participants pay goes to Best Buddies International, a nonprofit benefiting people with developmental disabilities.