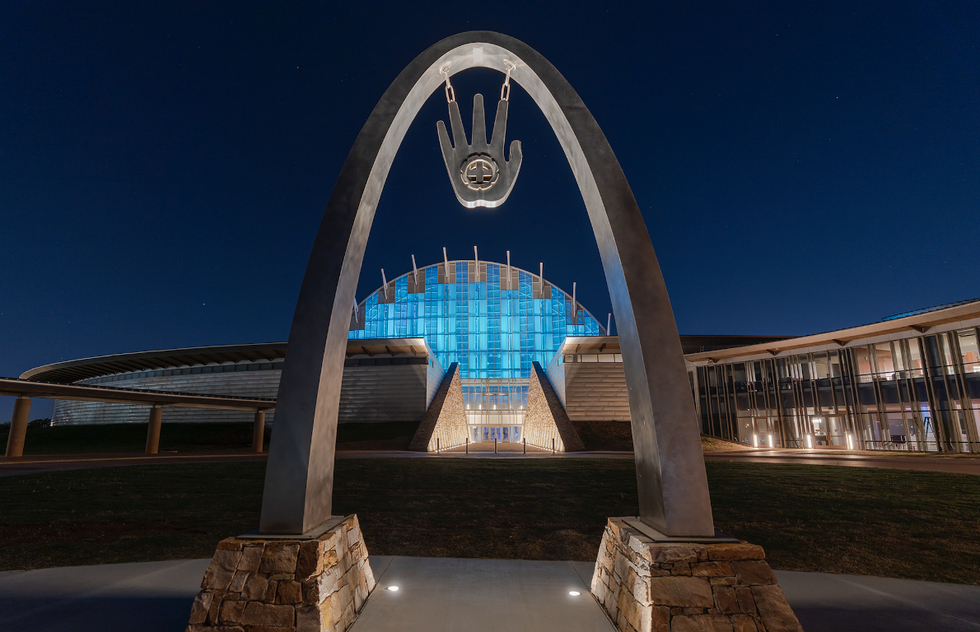 A total of 39 Tribal Nations are based in what is now known as Oklahoma. Only a handful are indigenous to the state—the rest were forcibly removed from other parts of the United States starting in the 19th century.

A new, $175-million, 175,000-square-foot museum opened this month in Oklahoma City to showcase the history, culture, art, and ongoing contributions of those Native groups in a gleaming, glassy, circular complex set on 40 acres along the Oklahoma River.

The First Americans Museum, which has been in the works for more than three decades, was designed with the cooperation of all 39 Tribal Nations of Oklahoma.

The architecture and grounds are at once sleekly modern and deeply rooted in Native symbols, from the domed, glass-fronted Hall of The People, modeled on the shape of a Wichita grass house, to the huge stainless-steel sculpture (pictured above; created by father-and-son Cherokee artists Demos Glass and Bill Glass, Jr.) of a welcoming hand suspended from a 13-foot-tall arch at the east-facing entrance.

Exhibits, which are curated by a team made up of members of tribes in Oklahoma, recount Native histories and customs via first-person narratives as well as artworks, films, and artifacts.

Visitors can watch an animation of four indigenous creation stories in the Origins Theater, which was designed by artist Jeri Redcorn to look like a giant piece of Caddo pottery. A forest-like audio-visual timeline unspools the tale of First Americans' ancient roots on the continent, disruption and displacement caused by European colonization, and later efforts to reclaim self-governance and continue thriving into the present. 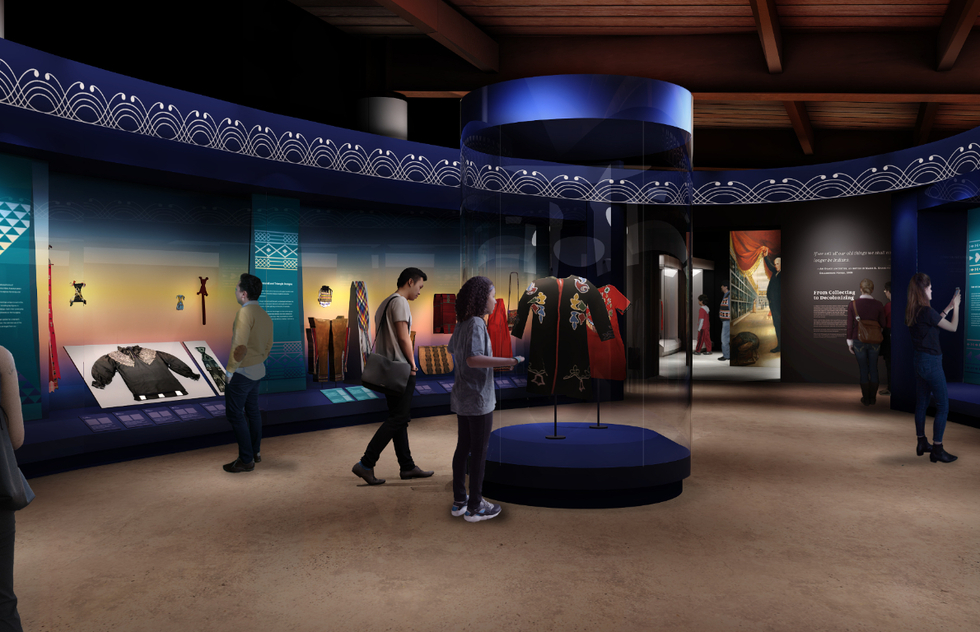 Scores of artifacts on long-term loan from the Smithsonian’s National Museum of the American Indian in Washington are also on display. According to Smithsonian magazine, the objects include everything "from clothing and textiles to tools and toys," all of which were collected in Oklahoma.

Outside, an enormous earthen mound honors the region's mound-building cultures, which were active in these parts starting about 1,500 years ago. Eventually, museum visitors will be able to walk to the top of the mound for an elevated view of the Oklahoma capital.

Local officials expect the museum to be a major tourist attraction.

"Our location is literally at the crossroads of America: I-35 and I-40, and I-44 is not too far away," the museum's CEO and director, James Pepper Henry, told The Oklahoman newspaper. "Over 200,000 cars drive right by us every single day in the summertime, about 125,000 in the wintertime. We couldn't be at a better place."

General admission to the First Americans Museum is $15; $10 for Tribal members and seniors ages 62 and older; $5 for kids ages 4–12; and free for kids ages 3 and younger. Purchase timed tickets in advance at FAMOK.org.