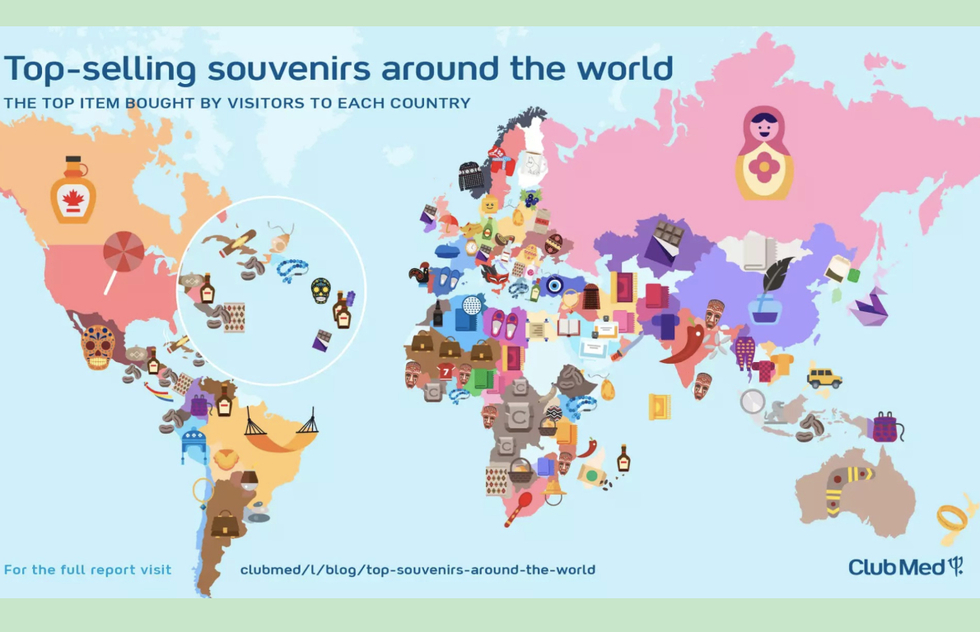 MAPS: Learn the Most Popular Tourist Souvenir In Countries Around the World

Based on the merchandise for sale at airports and hotel gift shops, we'd guess that the world's most popular souvenirs are T-shirts and refrigerator magnets.

But a new illustrated map of the top souvenirs from each country tells a different story.

To compile the graphic (pictured above), released by the all-inclusive resort brand Club Med, staffers researched the souvenirs most frequently associated with each nation in travel articles and other media, then cross-referenced the list with Google search data to find which item garnered the most interest per destination.

So, for example, articles about Thailand recommended Buddha statues, harem pants, and coconut oil. But among Google users, harem pants proved the most popular in conjunction with Thailand, so that's the souvenir assigned to the Southeast Asian nation on the map.

Club Med breaks it all down in a series of zoomed-in graphics spotlighting each continent. 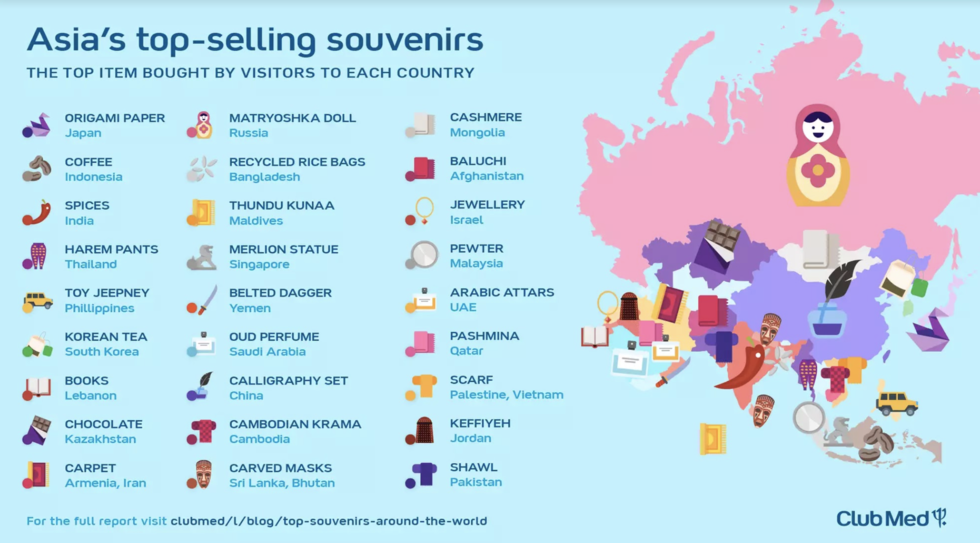 Listen, it's probably not the most scientific methodology ever devised, but the map is cute and colorful so let's just go with it, okay?

Besides, most of the souvenir-country pairings make perfect sense—maple syrup goes with Canada, Russian nesting dolls with Russia, boomerangs with Australia, and so on.

Other top souvenirs on the map could inspire you to get to know local cultures better, thus enriching your future travels.

In Nigeria, for instance, the colorful, hand-woven fabric known as aso oke appears. Learn about that textile and you'll learn something about the Yoruba people who wear it. 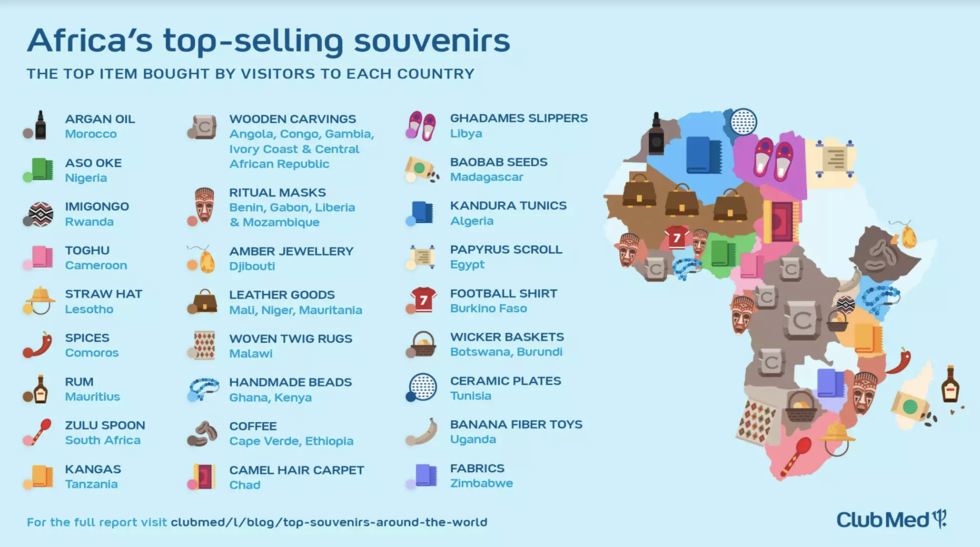 The popularity of rum as a tasty memento from Mauritius, Dominica, Barbados, Nicaragua, and Venezuela gives you an excuse to seek out every single regional variant of that spirit.

And then there are the pop culture–inspired souvenirs such as Lego sets from Denmark and knockoffs of Frodo's jewelry from New Zealand, where Peter Jackson shot the Lord of the Rings films. 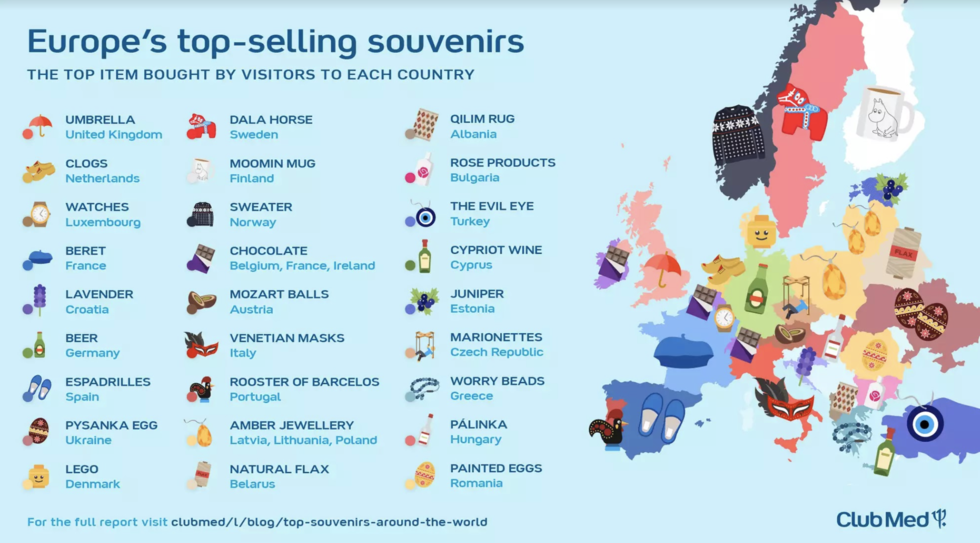 As for the United States, the most popular thing to take home from a visit, according to the map, is candy.

Too broad a category? Allow us to refine the search with our coast-to-coast roundup of the USA's tastiest regional sweets. 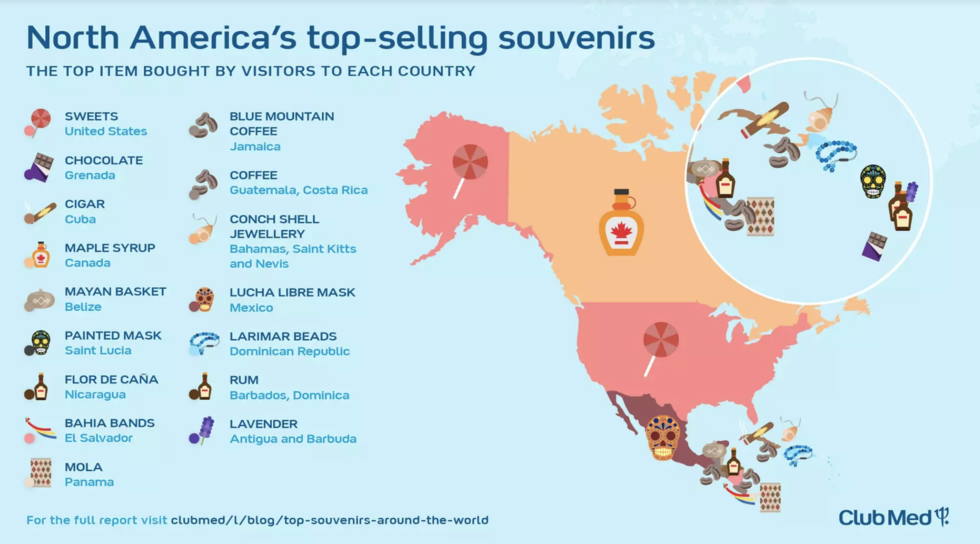