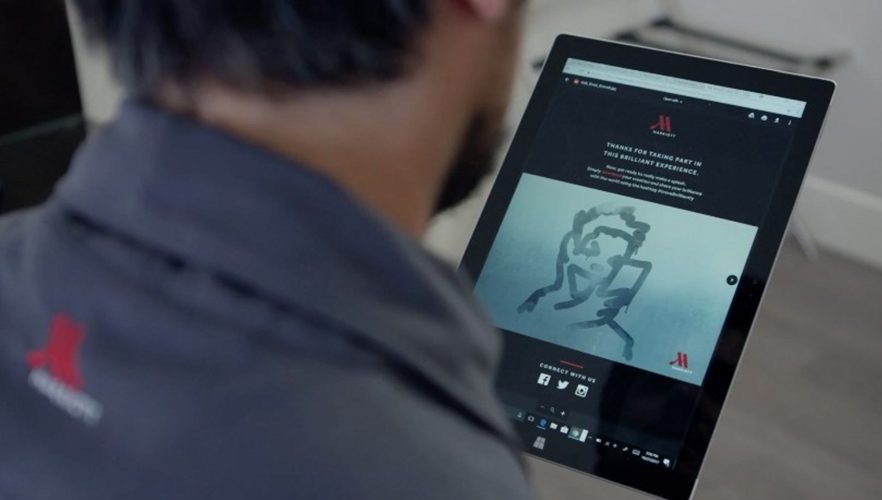 Marriott's New Shower Doors Record What You Doodle on Them

This winter, Marriott introduces what it calls "Splash of Brilliance," which are special shower doors that record whatever guests trace onto them and emails an image of it.

You probably had to read that twice, because so did we. Yes, if you draw on these shower doors with your finger, the glass remembers what you drew and can transmit it to you for later use.

Marriott is spinning this technology as something that will improve guest productivity. As in: Now if you have an idea in the shower, now you can record it on the door, which becomes, in Marriott's buzzwordy phrase, a "shareable canvas."

There are so many questions. So many.

Can it be used if the door doesn't fog up? Will the hotel be improving hot water capacity to make sure guests can doodle for as long as they want? Why would Marriott roll this out in, of all places, Irvine, California, a city coming out of a historic drought and where people are being encouraged not to linger in the shower for longer than absolutely necessary?

Can you erase mistakes—with a bar of soap, perhaps? And the promotional video (below) only features testimonials from cartoonists—is there any other profession that might want to use this strange invention? If so, we'd love to know what they might be.

Right now, the tricksy doors are slated for only a two-month winter run in Irvine, and only in one room. But if they're a steaming success, perhaps they could be expanded to Marriott properties everywhere, a scenario I doubt.