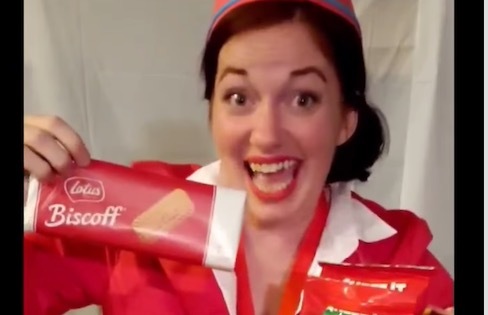 A lot of us have had to cancel travel plans lately. But few have responded with the DIY élan of Dana Jondahl.

When her annual birthday trip was nixed by the pandemic, the 34-year-old Minnesotan created her own at-home simulation of the entire air travel experience—from arriving at the airport to landing at her destination—and posted a delightful 3-minute silent movie–style video of the whole thing on Facebook.

Playing a passenger, TSA agent, flight attendant, and ground crew, Jondahl replicates a security screening with the use of a cardboard X-ray machine (she somehow persuades the TSA to let her through with a giant bottle of booze, which is probably easier to do when you're dealing with yourself), endures a purgatorial wait in an airport lounge, and, after boarding an inflatable plane, enjoys a mid-flight snack and open-mouth nap.

The video's creator told Insider that she has a background in "experiential marketing" and a fondness for crafting, both of which are put to good use in the clip.

But it's the details that really sell it.

Jondahl's TSA uniform, assembled from items in her closet, is spot-on, and she says that she learned actual aircraft marshalling signals to use with her bright orange batons (made out of foam pool noodles). A toilet seat serves as a clever stand-in for an airplane window.

The video, which has nearly 700,000 views as of this writing, imparts some nostalgia for the pre-pandemic days of air travel, too—throughout the whole re-creation, nobody puts on a mask.