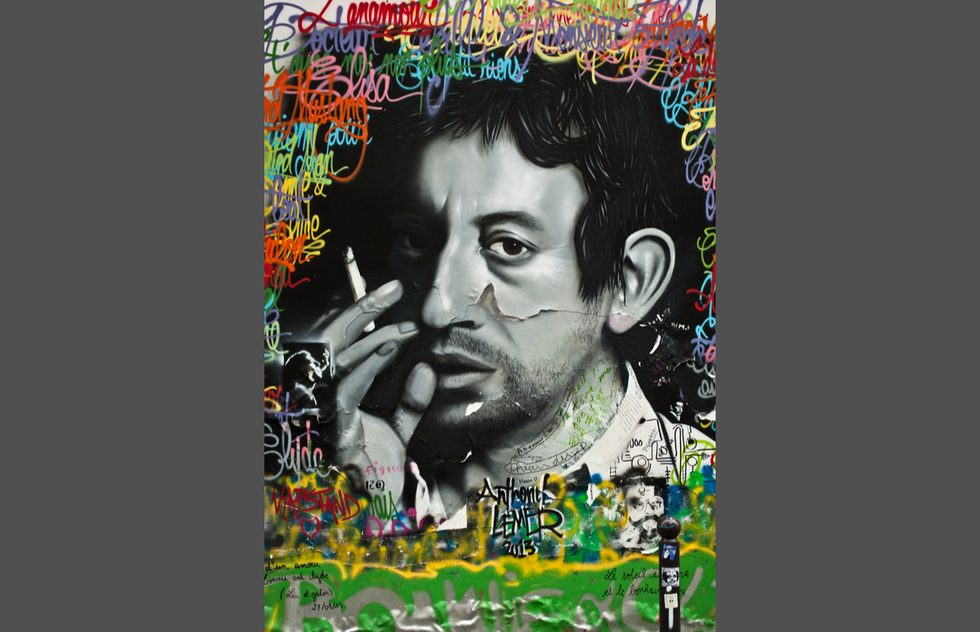 The colorful riot of spray-painted tributes left by fans of French singer-songwriter Serge Gainsbourg on the facade of his former home in the 6th arrondissement of Paris has long irked those who live nearby.

But then, the provocative pop icon, best known for his stylish, unclassifiable output of the 1960s and '70s, always did have a knack for stirring up trouble. After all, as the English-language, France-focused magazine The Connexion points out, we're talking about a musician who got himself banned from radio for a while for including simulated sex sounds in his biggest hit, "Je t'aime… moi non plus," and who used foul language to pervily hit on Whitney Houston during a live TV show in the '80s. To cite just two examples.

The graffiti hommages on the exterior of Gainsbourg's townhouse at 5 bis Rue de Verneuil began appearing after the singer's death in 1991.

While the street art changes constantly, the interior of the house, where Gainsbourg lived starting in 1969, has remained untouched for 30 years, reportedly right down to the cigarettes in the ashtrays.

Now, this time capsule of French pop is being opened to the public for the first time.

Thanks to an effort led by actor-singer Charlotte Gainsbourg—Serge's daughter—the building will begin welcoming guests in early 2022 as the Maison Gainsbourg.

The main attraction on the tour, according to Time Out, will be the home's large living area, which contains a piano, art deco bar, and Gainsbourg’s huge collection of sculptures.

The museum also encompasses another building across the street, where visitors can walk through a chronological exhibit on the singer's life and music. Displays will incorporate "previously unseen works" and draw on a "rich documental archive," per the museum website.

Fittingly, a piano bar will be part of the complex as well.

Ticket prices haven't been announced, nor can you make a reservation yet ahead of the planned opening in early 2022. But you can be among the first to know the latest developments by subscribing to the Maison Gainsbourg's email newsletter.