Traffic around the entrances and exits to LaGuardia Airport was a nightmare yesterday, resulting in major delays and in some cases missed flights.

The source of the trouble: the airport's ongoing, $5.3 billion renovation project, which has required lane closures for new construction, leading in turn to the sort of traffic snarls that could impel frustrated travelers to abandon their cars and cabs along the Grand Central Parkway and drag their luggage, briefcases, and strollers down the shoulder of the highway toward the terminals.

No really. That happened yesterday. 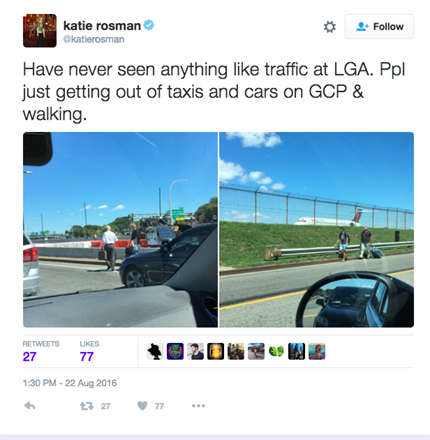 Many passengers missed their flights anyway—and some were delayed because their flight crews were stuck in traffic, too.

Construction for the makeover is supposed to last at LaGuardia until 2024; officials say the gridlock will improve as each phase is completed. In the meantime, they suggest taking public transportation whenever you can.

We suggest flying into or out of one of the other airports in the region—JFK or Newark.