Back in December, when the hotel conglomerate InterContinental Hotels Group purchased boutique hotelier Kimpton, the executives behind the change painted a smiley face on the transaction. But we predicted it would end in tears—and now it has.

In a matter of days, Kimpton, a hotel brand that was once nearly synonymous with the quirky charms of San Francisco hospitality, in one swoop has lost more than a half dozen properties in its hometown.

The properties have been sold to various hospitality companies. The supremely located Hotel Monaco, formerly the flagship of Kimpton's Hotel Monaco sub-brand, was re-flagged The Marker overnight by Colorado-based Destination Hotels. The Hotel Palomar is suddenly the Hotel Zelos (already referring to itself as "San Francisco's top luxury boutique hotel" when it answers the phonel; its recently established Dirty Habit restaurant is allowed to stay). The Argonaut, a popular choice by Fisherman's Wharf, was quietly taken over by Noble House Hotels and Resorts but not renamed.

It all happened so fast that service is in flux. According to disgrunted customer reviews online, some rooms don't even have information binders or "do not disturb" door hangers—the ones bearing Kimpton markings were so hastily removed there is currently nothing to replace them.

"There have been some shifts within San Francisco," a Kimpton representative confirmed with Frommer's. "Kimpton will no longer manage the Hotel Palomar San Francisco, Hotel Monaco San Francisco, Harbor Court Hotel, Triton Hotel, Prescott Hotel, Tuscan Inn and Argonaut Hotel as ownership has opted to transition to new management. We’re not in a position to comment further on ownership’s decision."

The loss represents about 11% of Kimpton's worldwide hotel properties. An executive for IHG quoted in Hotel News Now that the loss of the hotels is something that's specific to San Francisco and is not something that reflects the corporation's plans for Kimpton overall.

HotelChatter shed more light on that oblique comment when it published this tidbit earlier this summer: "A tipster with inside knowledge on the rebranding told us last week to expect 'More Kimpton hotels to be rebranded in the weeks ahead to avoid [becoming] unionized."

Whether Kimpton's trademark amenities—including resident animals and free afternoon wine hours—will be retained is up to the new operator of each property. The Hotel Zelos, once famous for Maverick the resident lobby dog (who passed away before this kerfluffle) still brings in its doorman's dog for guest interactions, and it still allows pets to stay the night.

This leaves just two Kimpton properties in San Francisco: the Sir Francis Drake on Union Square and the Hotel Buchanan, a new renovation in Japantown that Frommer's reviewed last week. According to published reports, those two hotels had already been unionized so they were not forced into a selloff. 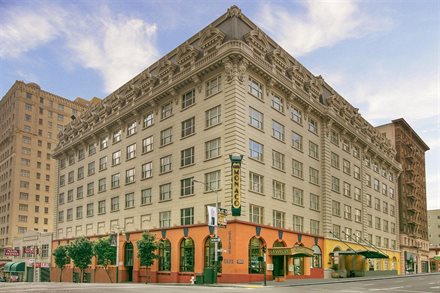 The Hotel Monaco was wrested from Kimpton and is now The Marker.