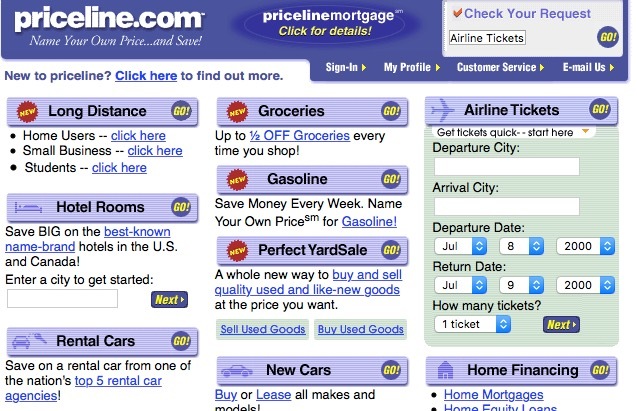 Yet another core offering of Priceline has been carved away.

The website, which made itself famous beginning in 1997 as a place where travelers could place low bids for various products without knowing in advance the brand of the seller, has ended its "Name Your Own Price" feature for rental cars.

The website now only offers set prices for its brand-blind rental car inventory. Because of the site's partnerships and behind-the-scenes negotiations, those deals may still compare favorably to standard prices, but the days of lowballing the rental car companies are over.

So are Priceline's many other stabs at NYOP technology, ranging from groceries to—amid the heady insobriety that precipitated the Great Recession—mortgages and home financing (offered on 2000's version of the site, above).

Priceline axed "Name Your Own Price" for airfare in late 2016.

The only thing you can bid for now on Priceline? A hotel room.

And even that isn't a sure thing since many hotel brands promise the lowest rate if you book directly with them instead. What's more, Priceline doesn't include resort fees in its quoted prices, so you could still win a supposedly great hotel price on the site that winds up being $40 or $50 higher a night than you thought.