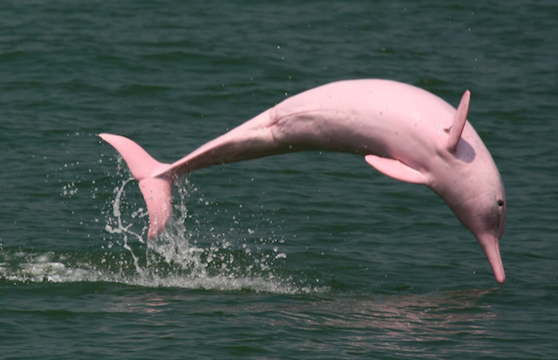 Rare Pink Dolphins Return to the Waters Around Hong Kong

Style mavens have declared "sorbet pink" one of the fashionable colors for fall 2020.

We're happy to report that the waters around Hong Kong are very much on-trend.

Rare pink dolphins, which also come in white and are otherwise known as Indo-Pacific humpback dolphins, are making a comeback in the Pearl River Delta between Hong Kong and Macau.

Scientists estimate that the region's dolphin numbers have increased 30% since March.

Researchers credit the resurgence to drastically reduced water traffic, specifically from high-speed ferries that have been suspended due to Covid-19.

“I’ve been studying these dolphins since 1993," Dr. Lindsay Porter of the University of St. Andrews told The Guardian, "and I’ve never seen anything like this dramatic change before, and the only thing that changed is 200 ferries stopped traveling."

The creatures are native to the area but their numbers have dwindled in recent decades. According to Reuters, experts think there are about 2,000 dolphins in the entire Pearl River estuary, but sightings close to Hong Kong have become uncommon due to clogged waterways.

Porter says that the dolphins returned almost immediately after ferry service stopped. She and her team have been studying the animals with drones and underwater microphones.

“From visual observations," Porter told The Guardian, "the dolphins are spending much more time socializing, splashing around on the surface, quite a bit of foreplay, quite a bit of sex."

Good to know somebody somewhere is enjoying 2020.

But what happens when more ferries go back into service between Hong Kong and the casinos of Macau?

To protect the dolphins, conservation groups such as WWF Hong Kong have advocated for reducing or diverting ferry lanes as well as increasing usage of a bridge between the two destinations that opened in 2018.