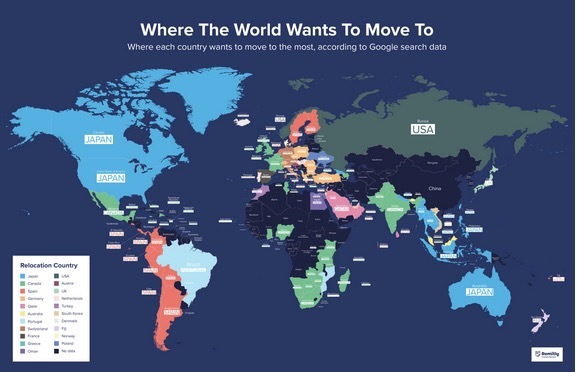 Relocation Is the New Way to Travel, but Where Do People Want to Move?

Given that the coronavirus is raging in most parts of the world, a weeklong vacation isn’t socially responsible right now.

But with so many working remotely, inveterate wanderers are satisfying their wanderlust by relocating for six months to a year.

That way, you can allow for two weeks of quarantine at the start of your stay and still get to experience new places and people. According to an analysis released by online money-transfer site Remitly, Google searches for the phrase “how to move abroad” have increased 29% in 2020.

Where are people moving? Remitly looked at search data from 101 countries and came up with some intriguing and often surprising insights.

We’re not sure whether it’s the twinkly smile of Prime Minister Justin Trudeau or the ready availability of poutine, but Canada was the number-one most searched country, according to Remitly. People from nearly three dozen other nations have the True North Strong and Free foremost on their minds when looking for a new place to live. (We won't say a thing about the weather.)

Canadians themselves have revealed a, yes, yen for Japan, the second most popular pick on the list. It’s followed in the overall rankings by Spain, Germany, and, somewhat unexpectedly, the Middle Eastern nation of Qatar.

Australia, Switzerland, Portugal, the United States, and the United Kingdom round out the top 10.

Where do U.S. and European citizens dream of relocating?

Like their neighbors to the north, Americans research moves to Japan the most, says Remitly. That's a move that would be easier to make post-pandemic than, say, a decade ago. Because of Japan's rapidly aging population, the country's immigration policies are far more welcoming than they used to be.

The report finds that Europeans are generally looking to stay on their own continent, with most looking into Germany for relocation. Canada still placed second, though, followed by Belgium and France.

Language seems to be the top motivating factor for South Americans, with Brazilians hoping to move to Portugal, and the rest of the continent picking Spain as the number-one choice.

When it comes to Africa and the Asian subcontinent (India and Pakistan), the data found that Canada was the most searched. Japan was tops for the rest of Asia.

The question now becomes: Will this list encourage some to aim for less popular countries? Relocating will likely be easier for digital nomads right now, since the demand will be lower.