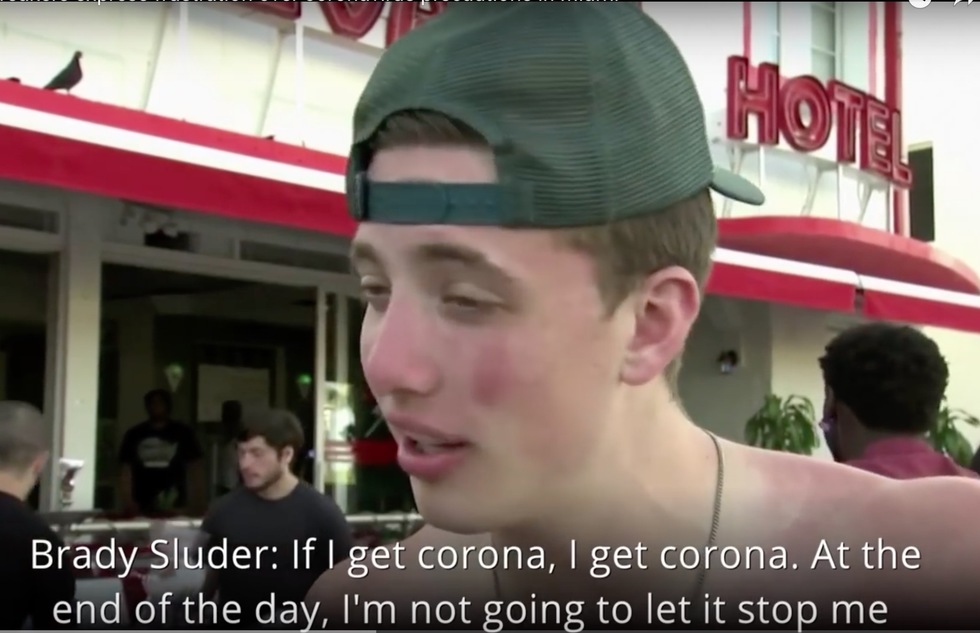 Spring Breaker Who Vowed to Party Despite COVID-19: I Was Wrong

Remember that die-hard spring breaker who went viral on the internet last week for saying he wouldn't mind going viral in a literal sense for the noble cause of partying?

"If I get corona, I get corona," he said in a TV news interview from Miami, making us all want to do a real-life interpretation of the face-palm emoji, if only that wouldn't involve, you know, touching our faces.

"At the end of the day, I'm not gonna let it stop me from partying," he continued, channeling the biblical prophet Isaiah, who wrote, Let us eat and drink Jäger bombs, for tomorrow we shall die.

“If I get corona, I get corona. At the end of the day, I'm not gonna let it stop me from partying”: Spring breakers are still flocking to Miami, despite coronavirus warnings. https://t.co/KoYKI8zNDH pic.twitter.com/rfPfea1LrC

The young man who appeared in the news footage was Ohioan Brady Sluder, one of many Florida beachgoers who went ahead with their revelry in spite of medical guidance to practice social distancing in order to stop the spread of the disease.

We are happy to report that Sluder, at least, has changed his nihilistic tune.

He felt "invincible" when he said what he said on TV, Sluder continued, referring to theories that the virus has a stronger impact on older people and those with underlying medical conditions.

But "I have elderly people who I adore more than anything in the world and other family members who are at risk," he wrote, "and I understand how concerning this disease is for us all."

I’ve done a lot of things in my life that I’m not proud of. I’ve failed, I’ve let down, and I’ve made plenty of mistakes. I can’t apologize enough to the people i’ve offended and the lives I’ve insulted. I’m not asking for your forgiveness, or pity. I want to use this as motivation to become a better person, a better son, a better friend, and a better citizen. Listen to your communities and do as health officials say. Life is precious. Don’t be arrogant and think you’re invincible like myself. I’ve learned from these trying times and I’ve felt the repercussions to the fullest. Unfortunately, simply apologizing doesn’t justify my behavior. I’m simply owning up to my mistakes and taking full responsibility for my actions. Thank you for your time, and stay safe everyone. ??

Good for him for coming around. And hey, you don't have to leave your isolation pod to have a good time. That's why the good Lord created liquor-delivery apps.