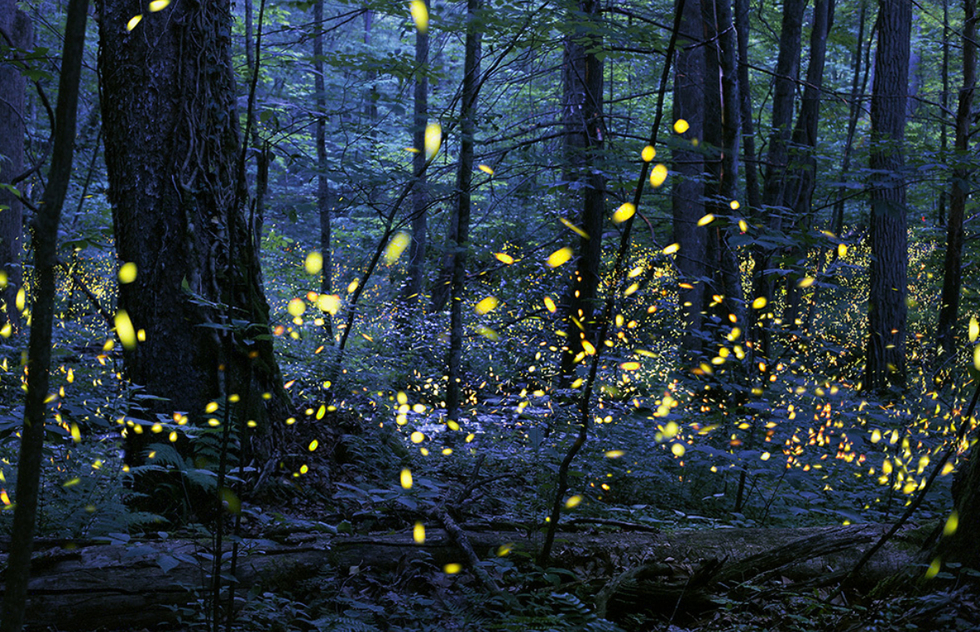 For a roughly two-week period each spring, fireflies put on a magical light show at Great Smoky Mountains National Park in Tennessee.

After dark, lightning bugs in the species Photinus carolinus miraculously synchronize their twinklers and fill the woods near the Elkmont Campground with tightly choreographed flashing patterns of bioluminescence.

The insects remain in unison for several hours—the only luminous American species to pull that off (at least until the next time somebody hands the Rockettes a bunch of sparklers).

The purpose of the fireflies' glimmering, according to the National Park Service (NPS), has to do with a mating ritual. "The males fly and flash and the usually stationary females respond with a flash," the NPS explains.

Nobody's sure why this species coordinates flashes, but National Geographic speculates that synchronization may help males amplify their signals or discourage predators.

The phenomenon does not discourage human spectators, however, which is why the national park has had to establish a lottery for its firefly-viewing event held during the peak of mating season.

Members of the public can enter the lottery for one of the coveted vehicle passes for this year's Elkmont firefly-viewing event by going to Recreation.gov.

Entering the lottery only costs $1, but the application period is as ephemeral as a firefly's flicker: The lottery opened on Friday, April 30, and closes Monday, May 3, at midnight.

What's more, only 100 vehicle passes per night (800 total) will be awarded through the lottery, which will be carried out by random computer drawing.

Crowds are kept to a minimum in order to avoid harming the insects—light pollution makes them stop glowing and humans can trample on females and larvae on the ground.

All lottery applicants will be notified by Friday, May 7, about whether they scored a pass or not. Those who are successful will be charged a $24 reservation fee.

The firefly-viewing opportunity was canceled in 2020 due to the pandemic, and this year's version will not have shuttle services for attendees in order to avoid packing riders into large vehicles with strangers. Instead, the limited audience will be able to park cars right at the viewing spot in Elkmont.

To enter the lottery (and you better hurry), visit Recreation.gov.

For a glimpse of this incredible spectacle from afar, check out the below clip from America's National Parks on the National Geographic TV channel.