The RV Revival Kicks Into High Gear—Should You Climb on Board? 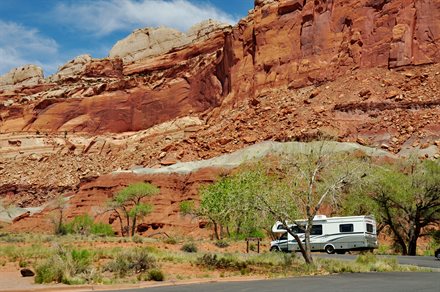 Welcome to the RV renaissance. After some dark days during the 2008 recession—when many belt-tightening Americans found it difficult to justify investing in recreation, let alone a recreational vehicle—the RV industry has made an impressive comeback.

Sales are way up; nearly 400,000 vehicles are expected to be shipped this year, compared to the dismal 166,000 sent out in 2008. Last week, President Obama showed up in the motor-home mecca of Elkhart, Indiana—where many manufacturers are based—to tout the city as a shining success in the ongoing economic recovery. Supporting that assessment, a first-of-its-kind study released yesterday by the Recreation Vehicle Industry Association (RVIA) found that RV makers and related fields (campgrounds, accessories suppliers, and so on) contributed $49.7 billion to the economy in 2015.

So it’s safe to say you’ll see more RVs on the road this summer than in recent years. But should you get behind the wheel of one?

You might be more tempted than you’d think. Far from the old image of RVs as gas-guzzling behemoths lumbering along the interstate, today’s options are sleeker and lighter, ranging from luxury models to pop-up campers. Campgrounds at national and state parks offer perks like electrical hookups, free WiFi, and kid-friendly activities. And if you’re reluctant to go all in by buying an RV, you can rent one via Outdoorsy.co or RVShare.com, both of which are jockeying to become the Airbnb of RVs. Relatively low gas prices at the moment might further induce you to climb on board.

All in all, it’s a good time to hog the road.