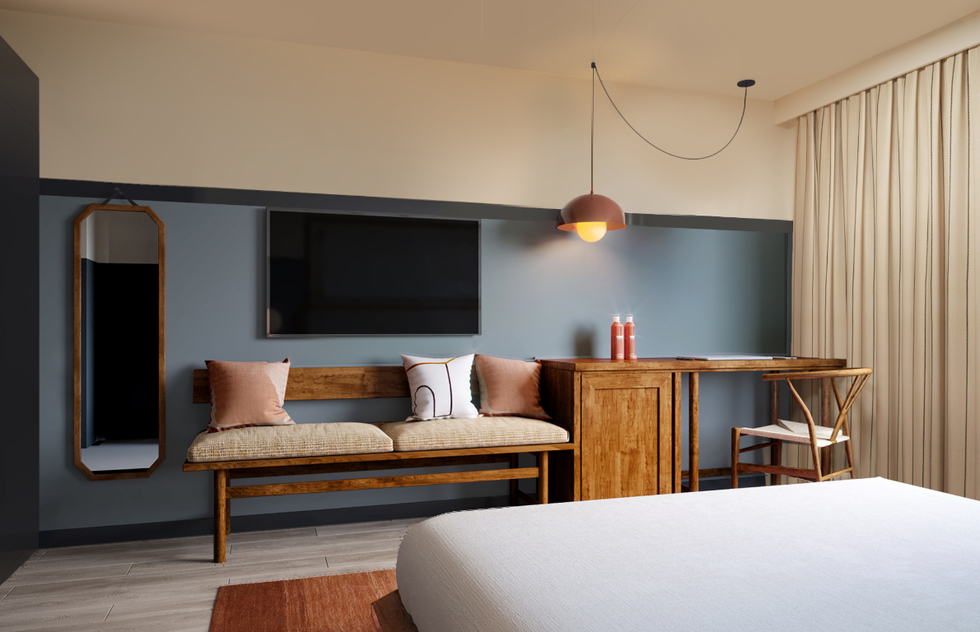 Kayak, the travel search aggregator that sells airfare, hotel stays, car rentals, and other vacation-related offerings, is opening its own hotel.

The 52-room Kayak Miami Beach will be housed in a 1930s Art Deco building previously known as Life House, Collins Park, until closing last year. The property is a few blocks away from the beach.

According to USA Today, the Life House chain will continue to run day-to-day operations at the rebranded and made-over hotel while Kayak will focus on the tech stuff.

For guests, those features will include check-in kiosks in the lobby, rooms with internet-connected TVs, and a comprehensive app that can be used for keyless room entry, sending messages to staff at all hours, adjusting the thermostat, booking events and upgrades, and more.

We kind of wish the developers had leaned into the Kayak theme more. Like, for instance, the pool could have been filled with the tears of travel agents. Or the restaurant menu could have been devised like an airline's basic economy price structure, with, say, a club sandwich "starting at $6" but then you find out you have to pay extra if you want a plate.

Frommer's asked a Kayak press rep whether the company's venture into the "in-travel experience," as the hotel announcement puts it, presents a conflict of interest with Kayak's core service.

In other words, will the Kayak hotel, which opens on April 11, get preferential treatment in search results when users look for Miami stays?

"We'll show Kayak Miami Beach when we think it's relevant to consumer activity on Kayak," was the response we got back via email.

Sure enough, when we conducted test searches on Kayak for hotel stays in Miami this spring and summer, the company's new property invariably appeared at the top of the results with a "Promoted" label, even though the Kayak hotel wasn't the cheapest option.

But at this point in the development of e-commerce, maybe we're all used to scrolling past ads and promotions and sponsored results to get to the stuff we were actually searching for. The practice certainly hasn't hurt Amazon.

Kayak currently ranks third in our independent assessment of the best and worst hotel search websites.