We know it's only Wednesday, but you can stop looking for the Customer Service Rep of the Week. It's Jen from Skyscanner.

The company, an airline search engine that compares flights to help you find bargains, received a post on its Facebook page from user James Lloyd, whose Skyscanner search had suggested a more than 400,000-hour layover in Bangkok during a trip from New Zealand to London.

"Hi Skyscanner," Lloyd wrote. "Just wondering what you’d recommend I do during the 47-year layover your website has suggested?"

The response came from Jen, the company's social media manager for the UK and Ireland:

"Unless you're a huge fan of The Terminal, I'd probably recommend spending those years outside of the airport, so here are a few suggestions."

She then listed some things you could do with 47 years in Thailand, including "become a Tai Chi expert" and explore a floating market. 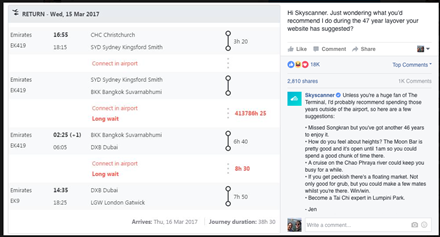 She also promised to look into the mistake and help fix it.

Meanwhile, Jen's playful response was a big hit on social media, garnering, as of this writing, nearly 3,000 shares and 18,000 likes.