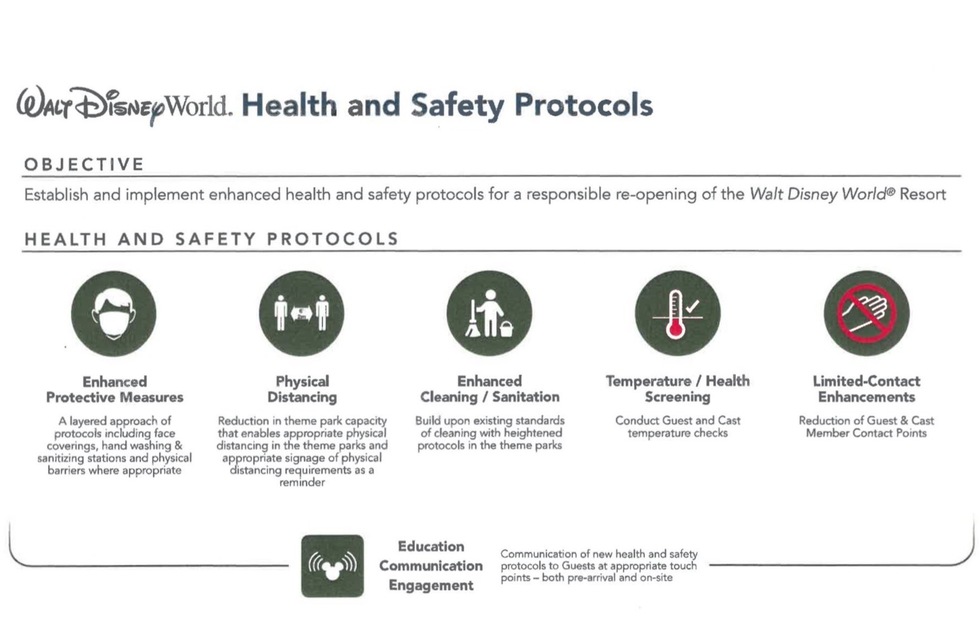 Walt Disney World near Orlando has presented its reopening plan to local authorities, revealing an intention to reopen in stages beginning Saturday, July 11.

The gradual process begins on that date (after a few days of soft opening for testing) with the Magic Kingdom and Disney's Animal Kingdom opening their gates to guests. Sister parks Epcot and Disney's Hollywood Studios (site of the new Star Wars: Galaxy's Edge) will come back four days later, on Wednesday, July 15.

Disney's return, following likely government approval, will happen a full month after competitors Universal Orlando and Legoland Florida reopen during the first week of June. The lag will give Disney the advantage of watching what works at other parks and tweaking procedures if necessary.

Disney's operational changes (partially outlined in a company document, pictured above) will be similar to what other parks are trying:

• Entry will only be granted by prior online reservation.
• Masks will be required for staff ("cast members") and guests, but the resort may create socially distanced safe zones where guests can remove their masks for a literal breather.
• Temperature checks will be required for guests and cast members.
• A newly implemented "Social Distancing Squad" will circulate among guests, policing compliance and monitoring guest comfort.
• "Reduced capacity" will be standard everywhere—on rides and transportation and at restaurants, where many tables will remain unoccupied.
• Parades, fireworks, and other events that attract crowds will be temporarily suspended.
• Character meet-and-greets and playground operations that would be considered "high-touch" activities are also suspended for now.
• Plexiglas barriers are being installed at retail and food sales outlets where social distancing would be difficult to maintain.
• The park is expanding Mobile Ordering, which allows guests to order and pay for food using the free My Disney Experience app and pick up orders on demand.

The parks also intend to expand their capacity for cashless transactions. This will mean an increased reliance on MagicBand RFID technology for ticketing and purchases.

The MagicBand could previously be used by anyone as a ticket for entry. But when it came to purchases in the parks, the technology was reserved for guests of Disney's onsite hotels. The company resisted allowing other MagicBand wearers to have the same privilege. Now that Disney has announced a push to increase MagicBand use, it's not yet clear if all guests will be able to link their credit cards to their MagicBands to make purchases.

Another cashless option the company is recommending for purchases: prepaid Disney Gift Cards. They're sold at the resort's largest retail locations.

Additionally, Disney World has put a pause on issuing new ticket sales and hotel reservations. The resort had been accepting new bookings during the shutdown, but now the plan is to make sure Disney can properly serve the bookings already made before adding to them.

SeaWorld Orlando also presented its reopening plan to government authorities, requesting a return date of Thursday, June 11. Tickets will require advance registration, which can be obtained at seaworld.com/orlando/reservation. That park's safety measures will be similar to those proposed by others in the region.

The two theme parks of Disneyland Resort in California have not yet issued reopening plans, but they will receive the green light to return as part of Stage 3 of Governor Gavin Newsom's phased comeback plan. That stage will probably be reached in June.

The most current Frommer's guide to Walt Disney World is part of our downloadable ebook guide to Orlando.

Update, May 29: When the parks reopen, they will no longer use the Fastpass+ system of timed attraction entry reservations. In order to accommodate social distancing, there will be only a single queue for each attraction. Disney has indicated that Fastpasses will not be used at least until the end of the year. 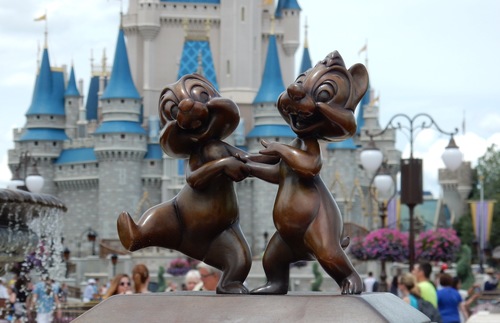