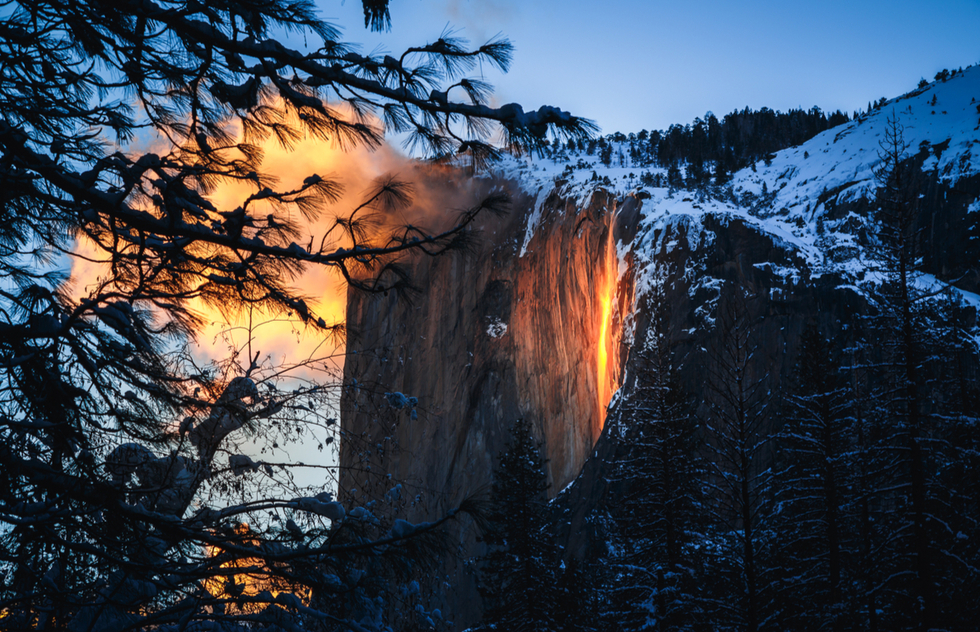 On evenings when conditions are just right in Yosemite Valley, the setting sun hits El Capitan's Horsetail Fall (pictured above) at an angle that makes the thin cascade look like an orange lava flow on the granite monolith's eastern side.

The dates to spot the phenomenon in 2022 are February 10 through 28, according to the National Park Service—though a sighting isn't guaranteed because the water has to be flowing and the sky has to be crystal-clear (no clouds, no haze) for the effect to be visible.

Based on weather forecasts, the Los Angeles Times reports that the best time to see the firefall this year will likely be between 5:27pm and 5:35pm on Monday, February 21. A special permit or reservation is not required to see the firefall, but parking and traffic restrictions are in place due to the event's popularity.

Those who can't stake out the glow aflow in real life have an excellent virtual alternative in a newly released time-lapse video created by photographer, stargazer, and aerospace scientist Sean Goebel.

Over the course of the five-minute clip, the firefall makes a couple of spectacular cameos, the first of which happens around the 0:36 mark.

Goebel began capturing images of Yosemite for the time-lapse starting in 2010, according to his YouTube channel, and he kept at it for just under a dozen years.

He wanted to show off the park from many angles, at several different times of day, and in all seasons, he writes.

In addition to the firefall, the footage shows off majestic views of the valley floor, star-studded skies, and distant climbers clambering up the cables on Half Dome.

Goebel told the photography website PetaPixel that, true to form, Horsetail Fall's February lighting effect proved the most elusive to get on video.

Goebel's stunning video certainly makes a strong case that Yosemite is worth repeat visits and has scenic rewards to bestow in any season.

For help planning your own trip to the area, Frommer's Yosemite & Neighboring Parks, available in paperback or as an e-book, has everything you need.