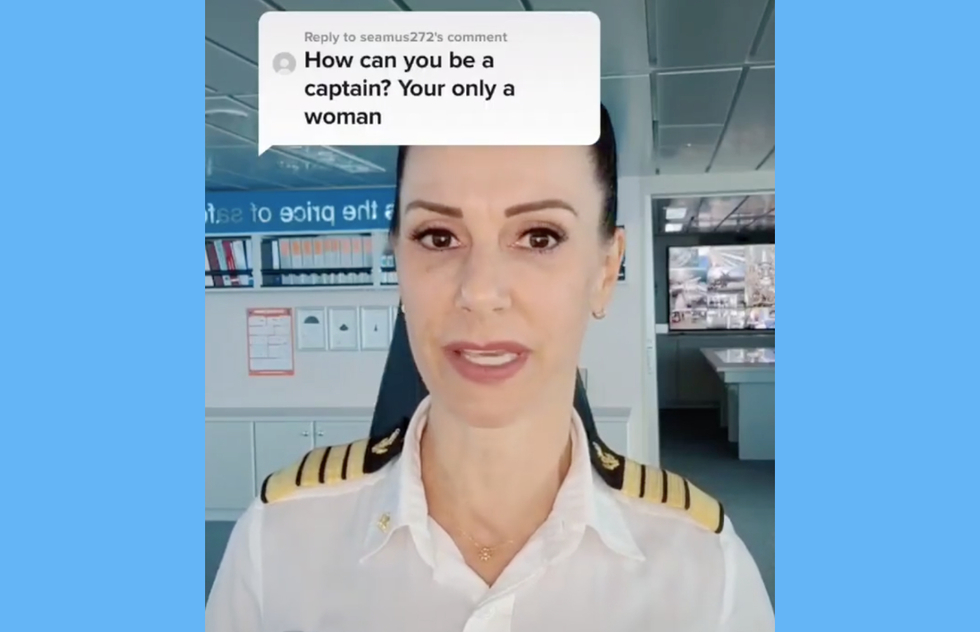 Captain Kate McCue of Celebrity Cruises was already worthy of admiration—in 2015, she became the first American woman ever to captain a mega-ship.

As if that wasn't impressive enough, McCue has now proven herself to be a grammar hero as well.

Earlier this week, the current commanding officer of the Celebrity Edge posted a TikTok video in response to a rude online commenter who asked, "How can you be a captain? Your [sic] only a woman."

"Normally as I’m scrolling through comments and I see something like this, I totally ignore it and move on with my life," McCue says in the video, which was shot from the bridge of her ship. "But I think it’s about high time I address this."

After all, the year is 2020, she continues, and at this late stage in human development it's shocking that, as McCue puts it, "someone still doesn’t know the difference between ‘you’re’ and ‘your.'”

For the future reference of misogynist trolls everywhere, McCue offers a helpful way to remember the difference.

You're is a contraction of you and are, she explains, "like 'you are sexist.'"

But "your is something possessive," she says. "It belongs to you, like 'your ignorance.'"

She then helpfully volunteers her services for further English lessons, saying, "If you need any more clarification, you can find me here—in my captain's chair."

The video ends with the captain on her throne, smiling as a twinkly filter fills the screen.

Since it was posted to TikTok and Instagram, the video has racked up nearly half a million views and almost 350,000 likes.

For a photo tour of the ship Capt. McCue commands (you're going to love it), check out The Celebrity Edge: A Tour of the New Pinnacle of Cruise Ship Design.