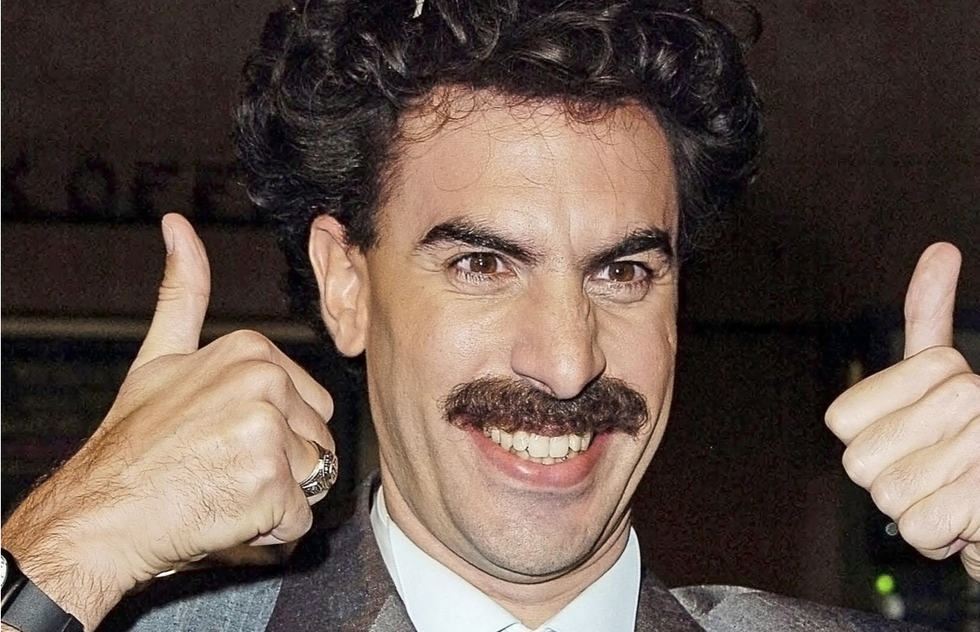 The premise of the newly released Borat sequel, Borat Subsequent Moviefilm, is that Sacha Baron Cohen's titular character, a clueless Kazakh journalist, must deliver an animal or, barring that, his daughter (living conditions for both are roughly the same in Borat's homeland) to the Trump administration. This is meant to be Borat's penance for making Kazakhstan a laughingstock in the first movie (2006).

Or, as the subtitle puts it, Borat's mission is the "Delivery of Prodigious Bribe to American Regime for Make Benefit Once Glorious Nation of Kazakhstan."

So in case anyone was wondering, it's clear right away that Cohen will not be going any easier on Kazakhstan than in the first film, in which the Central Asian former Soviet republic is depicted as backward, filthy, and anti-Semitic.

Fourteen years ago, the Kazakh government didn't take kindly to this portrayal, banning the movie from theaters, threatening to sue Cohen, and issuing furious denials that citizens enjoy drinking fermented horse urine. (For the record, the scenes set in Borat's village in both movies were actually shot in Romania.)

In response to the sequel's release, however, Kazakhstan has made a complete reversal.

Not only are tourism officials not angry this time—they've gone and adopted one of Borat's catchphrases as a tourism slogan.

In four beautifully photographed 12-second video ads, tourists are seen exploring Kazakhstan's snow-capped mountains, marveling at modern cities (which include Almaty and capital Nur-Sultan), and trying traditional dishes such as fermented horse milk—which still sounds kind of gross, but at least it's not urine.

At the end of each clip, someone delivers Borat's expression of highest praise: "Very nice!"

What prompted Kazakhstan's change of heart?

For starters, the first Borat is credited with boosting tourism to the country for years after the movie's release.

And besides, as the deputy chairman of the tourism board, Kairat Sadvakassov, told the New York Times, "In Covid times, when tourism spending is on hold, it was good to see the country mentioned in the media. Not in the nicest way, but it’s good to be out there."

In other words, all publicity is good publicity.