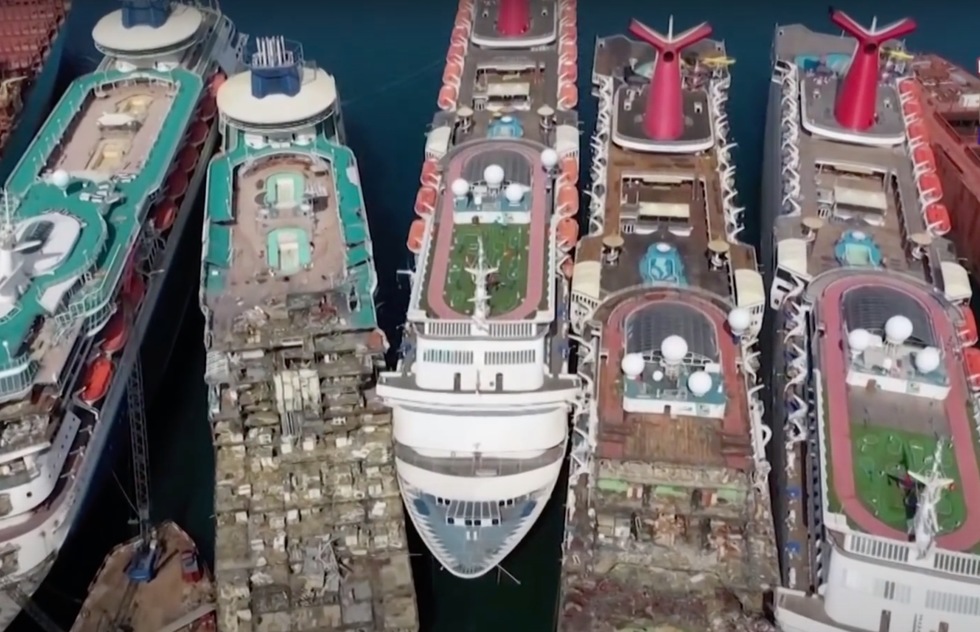 Maybe it can be argued that even before 2020, the cruise industry was reaching a saturation point. A long period of explosive growth perhaps forewarned that our cruise ship fleet was due for a correction.

But what a reversal. Carnival Corporation, which comprises nine cruising brands, has already decided to dispose of 18 ships—many of them older—representing 12% of its passenger capacity. And those retired ships have to go somewhere.

Some ships have been sold and re-flagged, but many more have reached the end of the line and are being sold for scrap.

The pandemic took the wind out of the proverbial sails of the U.S. cruise industry, but it's been a boon for the town of Aliaga, north of Izmir on the west cost of Turkey, where many onetime Fun Ships have made their final call.

For a magisterial but sobering bird's-eye view of Covid-19's real cost to the vacation business, there's this drone footage of the ship breaking work underway in Aliaga. Watch as these mighty machines, including the Carnival Imagination, conclude their tours of the seven seas in one final, elegiac burst of disintegration.

For a more in-depth look at ship breaking and how it's done, here's a fascinating background video by Australian maritime historian Chris Frame.

For another beautiful/depressing look at what 2020 has done to the mass travel industry, check out this aerial footage of hundreds of commercial airplanes parked in the remote Mojave Desert in California.

So stunning, so eerie—and we're so over it.