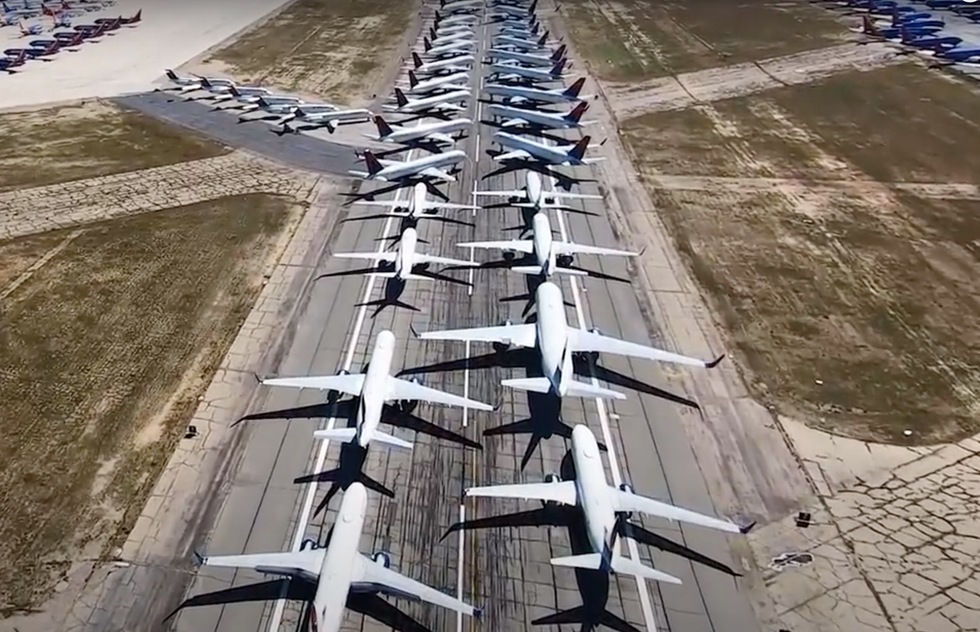 WATCH: Stunning Aerial Footage of Over 400 Airliners Mothballed in the Mojave

When an airline pulls an aircraft from service, pilots can't just leave it at the airport gate and pocket the keys. They have to move the plane somewhere.

Various carriers use various solutions—some planes are parked at smaller airfields in places like Tulsa, Pittsburgh, or Roswell, New Mexico. But one of the largest repositories of disused jets is in the Mojave Desert near Victorville, California.

Amateur pilot Bryan Keith recently outfitted his small plane with multiple HD cameras and took off from the San Fernando Valley to take a look at the hundreds of planes in outdoor storage at Southern California Logistics Airport (KVCV), located a 90-mile drive around the mountains northeast of downtown Los Angeles.

One of the airport's main runways (pictured above) is now stacked with silent jets like books on a bookshelf.

As you might imagine, the facility's traffic controllers don't have lots to do right now. So they generously allowed Keith to buzz much closer to the planes than he would normally be allowed to get.

The resulting video he shot is haunting. It shows row upon row of dormant jets that just a few weeks ago were ferrying people and cargo around the world for the likes of Southwest Airlines, Delta Air Lines, and FedEx.

If you have ever lost your car in a parking lot, you may want to avert your eyes.

The tail end of the video has another treat: lovely aerial shots of California's famous springtime "superbloom" of wildflowers. Most years, that display would be the star of any viral video show—in 2019, Frommer's covered the spectacle as "Flowergeddon."

This year the scene is more memorable than ever, but for all the wrong reasons.