You're about to hear a lot more about Motel 6 in the coming weeks. By the end of this year, it hopes to have renovated 75% of its 1,200-plus properties.

The motel chain knows it has an image problem, so to promote the things it's doing to revitalize its brand, it's launching a big media blitz that includes a 30-second TV commercial featuring some fancy camera work that fully shows off what a new-brew Motel 6 looks like.

According to a Motel 6 press release, here's what the new rooms are like:

"Included in the renovation are new entertainment units that house a 32-inch flat-screen TV, a cubby for personal items and a multimedia panel enabling guests to plug in their personal devices, such as an MP3 player or laptop. Additionally, the new guest room incorporates wood-effect flooring along with pillow-top mattresses on pedestal beds.  In addition, the bathroom showcases double doors, a black granite countertop with vessel sink and a walk-in shower."

In short, Motel 6 will still be simple inexpensive—it just won't be ancient, too, anymore.

The motel chain is calling the revitalization effort "The Phoenix Project"—as in the mythical bird that could only be born from the ashes of destruction. 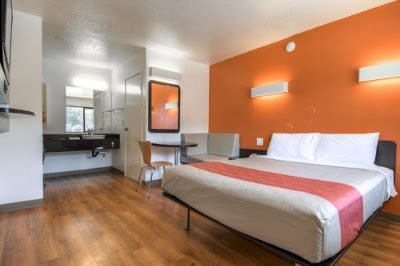