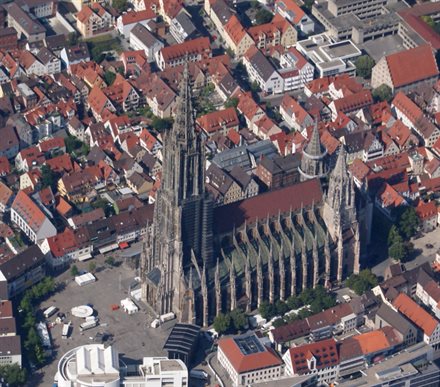 Germany's Ulm Minster, which holds the distinction of being the tallest church in the world, is being slowly but surely eroded by pee.

The Lutheran cathedral's custodians say that public urinators are leaving behind an acidic buildup that eats away at the stonework on the lower walls, causing lasting damage to a building that has stood for more than six centuries. Its primary claim to fame: a world-record 161.53-meter (530-ft.) spire.

Fines for public urination in Ulm, located in the south of the country, have recently been doubled to 100 euros (US$109), and police say they have stepped up patrols.

But Michael Hilbert, the church's head stonemason, says those measures have had little effect.

"I've been keeping an eye on it for a year now and, once again, it's coated with urine and vomit," he told The Telegraph of London. "I am not the pee police, but it's about maintaining public order."