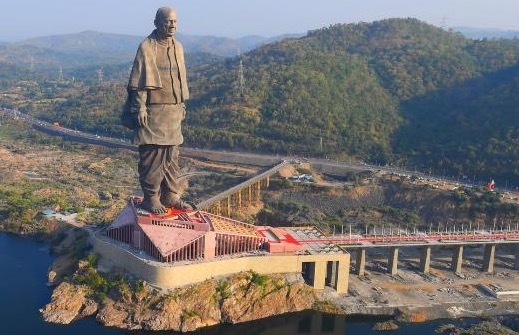 Throw in men made of bronze, and that figure might jump up a few notches, at least as of last week.

That's almost two times taller than the Statue of Liberty (305 ft./93m, pedestal included) and is significantly more colossal than the Colossus of Rhodes, the ancient wonder believed to have topped out at a puny-by-comparison 108 feet (33m) before being destroyed by an earthquake.

The Statue of Unity is located in Gujarat, India's westernmost state. Towering over forested hills and the Narmada River, the monument honors Patel, who grew up in the region and later served as the nation's first deputy prime minister after India gained independence in 1947. Patel was considered crucial in persuading scores of independent monarchs to join the republic.

Response to the statue hasn't been as unified, however. According to the New York Times, local tribal leaders objected to the destruction of land for the project, while other critics have derided its $400 million cost.

Tickets to the Statue of Unity are 350 rupees (US$4.79) for adults. Admission includes access to an observation deck, garden, and museum about Patel's life.