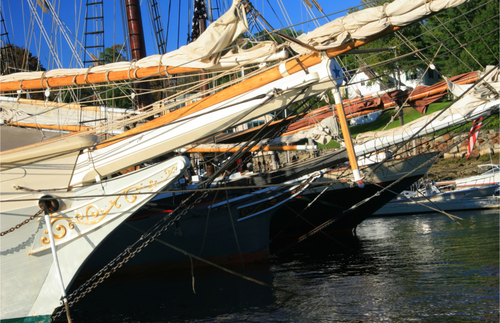 Several sailing ships make Camden their home base, and it’s a rare treat to come and go from this harbor, which is considered by many to be the most beautiful in the state.

The 57-foot windjammer Surprise, first launched in 1918, has been based in Camden Harbor for decades now. Captain and First Mate Ramiro and Nicole de Acevedo Ramos take a maximum of 18 passengers on 2-hour, nonsmoking sailing trips from the town’s Public Landing. Four daytime excursions ($50 adults, $40 children under 12) are offered daily from mid-June to mid-August, and three are run daily in May, and from mid-August through mid-October. There’s sunset and full moon trips too, both with homemade desserts and acoustic music. Reserve ahead online, or else show up at the ticket table on the waterfront and cross your fingers for a cancellation.

Modeled after the Gloucester fishing schooners of the late 19th century, the Schooner Lazy Jack II (tel. 207/230-0602) has been plying the waters since 1947. The ship goes out on four 2-hour cruises per day on weekends from May through mid-September, then three per day through October. The tours cost $50 per adult, $40 per child under age 12; BYO wine, beer, and snacks.