Things to Do in Castine 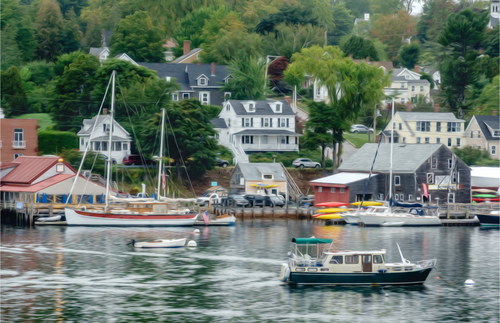 Quiet little Castine, off the beaten track, must be one of the most gracious villages in Maine. It's not so much the handsome, meticulously maintained mid-19th-century homes that fill the side streets. Nor is it the location on a quiet peninsula, 16 miles south of tourist-clotted Route 1. No, what lends Castine most of its charm are the splendid, towering elm trees that still overarch many of the village's streets.

Before Dutch elm disease ravaged the nation's elms, much of America once looked like this. Through perseverance and a measure of good luck, Castine has managed to keep several hundred of its elms alive, and it's worth the drive here to see them.

But Castine offers more than trees. It's enduringly quiet, which is probably what you're seeking in your Maine vacation. And it's full of history. This outpost served as a strategic town during various battles among the British, Dutch, French, and colonists in the centuries following its settlement in 1613 (yes, 7 years before Plymouth Rock!).

Castine was occupied by each of those groups at some point; and historical personages like Miles Standish and Paul Revere passed through town. It was a very important place -- strange, because now it seems almost thoroughly forgotten, except for the maritime academy at one end of the village, which still trains young sailors and cadets. Castine looks and feels as though it hasn't changed much since the locals welcomed British soldiers with open arms during the American Revolution.

You'll have to work (which means drive significant distances) to find nightlife and dining, but if you like your towns quiet, you'll love it here.