Things to Do in Downeast Coast 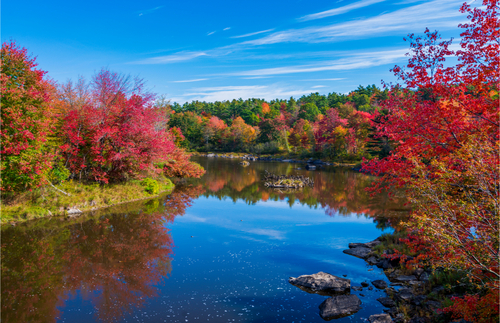 The term Downeast, as in “Downeast Maine,” comes from the days when ships were still powered by sail. East Coast ships heading north and east along this coastline had strong prevailing winds at their backs—making it an easy “downhill” run to the farthest eastern ports. (Returning took more skill and determination.)

Today it’s a rare traveler who gets Downeast to explore the rugged coastline of Washington County. Very few tourists venture beyond the turnoff to Mount Desert Isle, discouraged by a lack of services and high-marquee attractions. Yet Downeast Maine does have appeal—so long as you’re not looking for luxury. There’s an authenticity here that’s been lost in much of the rest of Maine. Many longtime visitors say this is how all of Maine used to look in the 1940s and 1950s, when writers and artists first arrived in earnest. Thai food, the New York Times, and designer coffee have yet to make serious inroads into Washington County, where a rugged, hardscrabble way of life and tough interdependence among neighbors still predominates. And yet, just when you think you have the Downeast coast pegged, you encounter some oddball little pocket of artsy wonder or creative-class entrepreneurship with a salty tinge.

Many residents here still get by as their forebears did—scratching a living from the land and sea. Scalloping, lobstering, and fishing remain the major sources of income, as do blueberrying, logging, and other forest work. Grubbing for bloodworms in spring, picking berries in the barrens in late summer, climbing fir trees to get the fragrant tips for Christmas wreaths in the fall—that’s not a vacation around here, that’s what people do to make ends meet. In recent years aquaculture has also become an important part of the economy around Passamaquoddy and Cobscook bays; travelers can sometimes see vast floating pens, especially around Eastport and Lubec, where salmon are farmed for gourmet diners worldwide.

The geographical isolation of this region ensures that you’ll have these back roads and tiny towns to yourself—most of your fellow travelers have been waylaid by the charms of Kennebunkport, Portland, Camden, or Acadia. But if you’re hoping to get a peek at the Maine that rarely shows up on the tourist brochures, you’d be wise to make a trip here for a day or two. You might never see Maine the same way again.

At the end of your coastal exploration, you can also take a bridge to another country—and another time zone—by visiting New Brunswick, Canada, even if only for a few hours. You’ll need a valid passport for that.