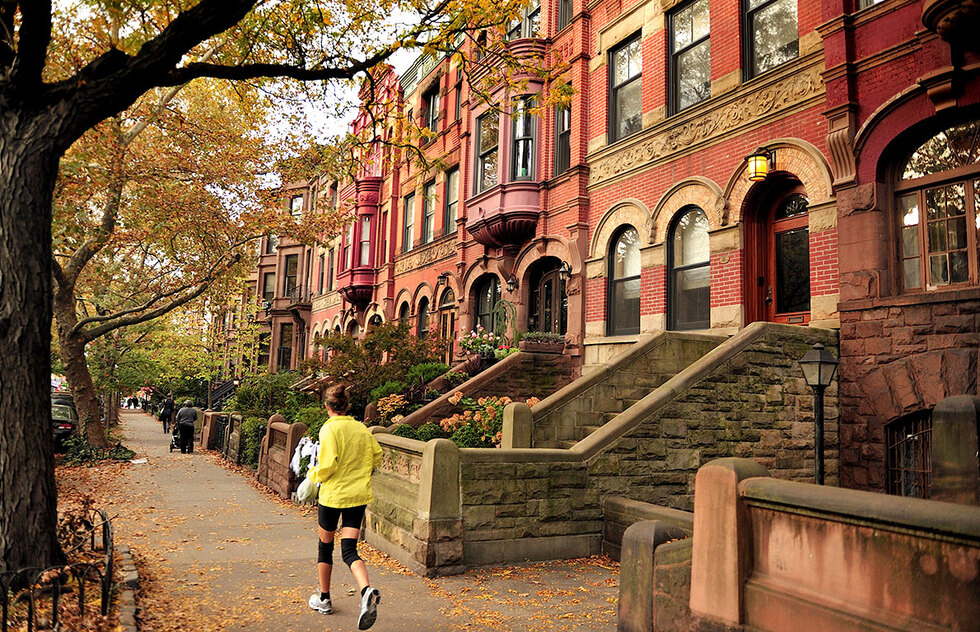 Neighborhood Brooklyn Transportation Subway; A, C, F to Jay St.; the 2, 3, 4, 5 to Clark Street or Borough Hall; or the R to Court Street

Just across the Brooklyn Bridge is Brooklyn Heights, a peaceful neighborhood of tree-lined streets, more than 600 historic houses built before 1860, landmark churches, and restaurants. Even with its magnificent promenade providing sweeping views of lower Manhattan’s ragged skyline, it feels more like its own village than part of the larger urban expanse. This is where Walt Whitman lived and wrote Leaves of Grass, one of the great accomplishments in American literature. And in the 19th century, fiery abolitionist Henry Ward Beecher railed against slavery at Plymouth Church of the Pilgrims on Orange Street between Henry and Hicks streets (his sister wrote Uncle Tom’s Cabin). If you walk down Willow Street between Clark and Pierrepont, you’ll see three houses (nos. 108–112) in the Queen Anne style that was fashionable in the late 19th century, as well as an attractive trio of Federal-style houses (nos. 155–159) built before 1829. Also visit lively Montague Street, the main drag of Brooklyn Heights and full of cafes and shops. On Water Street, under the Brooklyn Bridge, is the River Café ([tel] 718/522-5200; www.rivercafe.com), where a drink or dinner at twilight, as the lights of Manhattan begin to flicker on, will offer an unforgettable view.

It’s easy to link a walk around Brooklyn Heights and along its promenade with a walk over the Brooklyn Bridge, a tour that makes for a lovely afternoon on a nice day.

Take a no. 2 or 3 train to Clark Street (the first stop in Brooklyn). Turn right out of the station and walk toward the water, where you’ll see the start of the Brooklyn Promenade. Stroll along the promenade admiring both the stellar views of lower Manhattan to the left and the gorgeous brownstones to the right, or park yourself on a bench for a while to contemplate the scene. The promenade ends at Columbia Heights and Orange Street.

To head to the bridge from here, turn left and walk toward the Watchtower Building. Before heading downslope, turn right immediately after the playground onto Middagh Street.

After 4 or 5 blocks, you’ll reach a busy thoroughfare, Cadman Plaza West. Cross the street and follow the walkway through little Cadman Plaza Park; veer left at the fork in the walkway. At Cadman Plaza East, turn left (downslope) toward the underpass, where you’ll find the stairwell up to the Brooklyn Bridge footpath on your left.