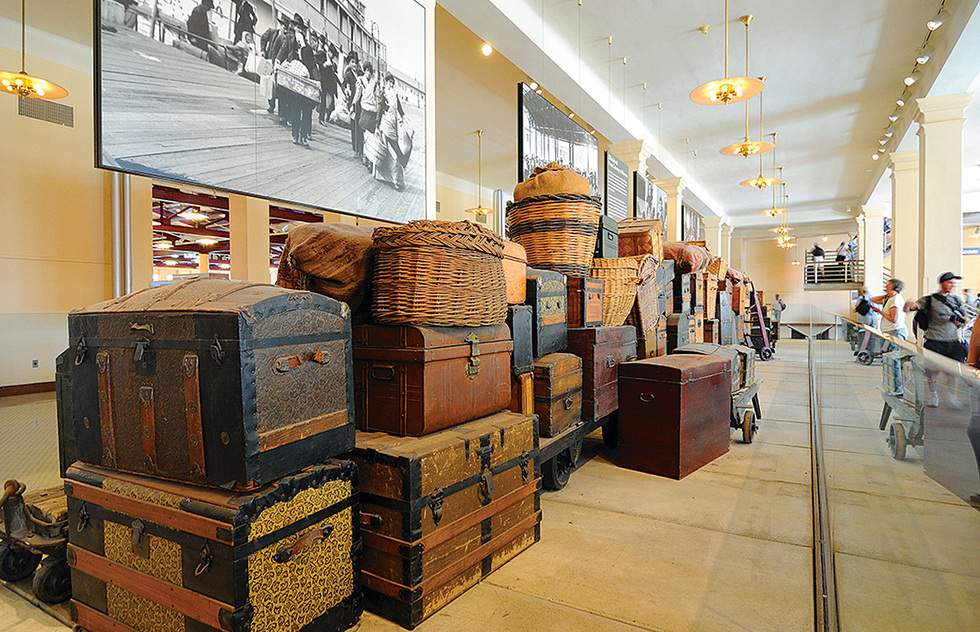 The epicenter of the largest migration in human history, Ellis Island was in near-continuous use from 1892 to 1954 as the point-of-entry processing center for the majority of immigrants (including my grandmother) who settled in the U.S. during those years. Over 12 million people passed through its halls, sometimes as many as 12,000 in a single day.

The stories of these immigrants—what they were escaping, what they found once here, and what they experienced in their short time in the purgatory that was Ellis Island—are at the core of the Ellis Island experience. But in 2015, Ellis Island decided to expand its mandate, widening its focus to embrace the entire history of immigration to America. This makes it a solid candidate for a repeat visit from those who’ve toured it before (more on that below). First time visitors, however, will want to concentrate on the original exhibits which remain the most emotionally resonant for the simple reason that they’re about Ellis Island itself, and learning about this endlessly fascinating place while walking through its hallowed halls is a powerful experience.

Start in the second-floor Grand Hall (officially titled the “Registry Hall”), awe-inspiring with its massive white tile-vaulted ceiling (created by the same firm that did the ceiling in Grand Central Station’s Oyster Bar) and larger than any church or temple these immigrants likely would have attended in their home villages.

Behind the Grand Hall is a warren of small rooms where immigrants were tested for mental competency, literacy, and communicable diseases. How these tests were done—and the fear they inspired—is chronicled in historical photos, wall text, and most poignantly at listening stations (or over the free audio tour headphones), on which you hear actual immigrants share their memories of their time on the island.

The top floor chronicles the history of the processing facility itself. These exhibits can be skipped if you’re short on time, but don’t miss the “Treasures from Home” exhibit, also on this floor, which features 2,000 of the possessions that were brought through Ellis. Somehow seeing the china dolls, the precious wedding photos, the native costumes, and the letters home brings the immigrant experience more vividly to life than any other part of the museum. Note: The heating and cooling facilities on the island were knocked out by Hurricane Sandy and were still being repaired in 2015 as this book went to press, forcing the closing of the Treasures from Home exhibit. Hopefully that exhibit will be re-opened by the time you visit.

For those coming on a repeat visit, there's a new tour (see below) and three new exhibitions of note, two of which expand the story of immigration to America, to the era before Ellis Island opened (Journeys: The Peopling of America) and to the period after World War II through today (The Journey: New Eras of Immigration). Both are quite wall text heavy, which may frustrate some visitors. If you have to choose between the two, I’d pick “New Eras of Immigration” as it features affecting videos profiling recent immigrants, both legal and illegal. It also tells a story that’s rarely discussed in a balanced fashion: the myriad and surprising ways in which immigration is reshaping today’s America. The highlight of the last new exhibit, American Stories, are the monitors that allow visitors to take an actual, current citizenship test (I'm proud to say I got a perfect store).

The final newish experience is the Hard Hat Tour, which takes visitors through the haunting—and unrenovated—Ellis Island hospital. Some 10% of the Ellis Island immigrants spent some time here, often right before being shipped back to Europe, their only crime being ill. The facility was closed for 60 years and it’s falling apart—hence the need for hard hats. The only new items are the oversized archival photos of hospital residents that French artist JR added onto the crumbling walls, broken windows, and metal lockers—a moving tribute.

There's also a cafeteria on-site should you need a break, along with the "American Family History Center" which was expanded by 32 million records in 2015 (immigration info from the years 1924 to 1957 were added). Trained genealogists are on site to help visitors navigate the computer search; the cost for a session is $7.

I am one of the 40% of all Americans who had a relative come through Ellis Island, as I said at the start, and I find it difficult to tour this museum without tearing up at some point. I have no doubt that even those visitors without this direct a connection will find the journey through Ellis to be one of the most moving experiences of their New York visit.