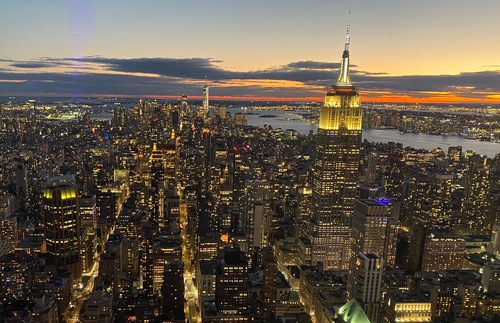 There’s no better introduction to New York than a visit to the Empire State Building. The apex of the New York skyline, both literally (at 102 stories and 1,454 ft.) and figuratively, the view from its Observation Deck is at once instructive and exhilarating. From your bird’s-eye perch, you orient yourself geographically and see, with a clarity not possible on the ground, the miracle of Manhattan, that runt of an island that couldn’t get much wider or longer, and so did what no other city before it had done and expanded to the skies, becoming a dense, pulsating city of boxy towers set on a painfully narrow strip of land.

Look first to the south, where the Financial District’s powerful skyscrapers loom over the field of lower, mostly residential housing that stands between it and Midtown. Beyond the Financial District, in the harbor, are the Statue of Liberty to the right and the Brooklyn Bridge (the most graceful of the three bridges you’ll see in this direction). Right below you will be the triangular Flatiron building, one of the most thrillingly odd in Manhattan (it was Frank Lloyd Wright’s favorite building). Just to the side of it are the glittering gold roof of the Metropolitan Life Tower and the World Life Insurance Towers, once centers of New York’s high society and now just part of the landscape. Drift to the north side of the building and you will be among a riot of skyscrapers, thrown up in a manner that seems wildly chaotic from this vantage point. This strip of Midtown contains more office space per acre than any other area in the world. Peer through the curtain of buildings to catch a glimpse of Central Park, looking like a modest lawn from this great height.

The attraction has been able to make the entry process much more efficient in recent years, and now offers timed tickets. To make sure you don't encounter any crowds: