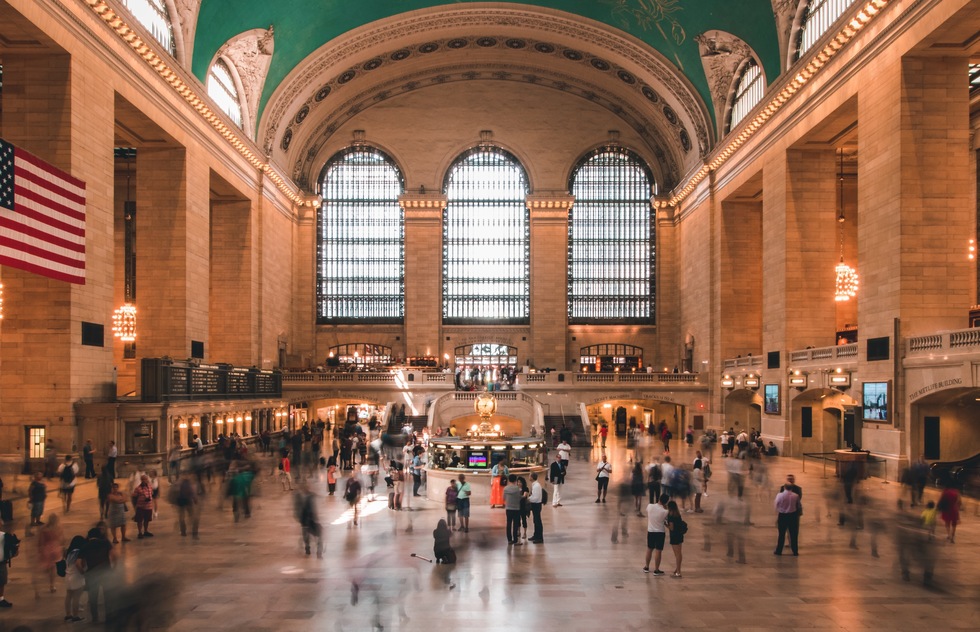 Jack Finnigan on Unsplash
Our Rating

In ancient Roman times, the entrances to great cities were framed with monumental arches, meant to awe all who passed through. When Grand Central Station was being built at the turn of the last century, it was recognized that our railroad terminals were our grand gateways, the first view a traveler would have of the metropolis. So the architects of both Grand Central and the late great Pennsylvania Station (the original, torn down in the 1960s) conspired to create as much pomp and stateliness as possible, filling these spaces with the symbols and architecture of imperial Rome. On Grand Central’s facade, 10 colossal Doric fluted pillars tower over Park Avenue; above them a massive statue of Mercury, the god of travel, spreads his arms in welcome as Hercules and Minerva, gods of strength and wisdom, lounge at his feet. (The face of the clock below the sculpture is the largest piece of Tiffany glass in the world.)

The station’s interior is no less impressive, its concourse soaring the equivalent of nine stories to a vaulted ceiling on which the signs of the zodiac are created from 59 fiber-optic lights and 2,500 painted stars. The side walls feature massive windows that throw shafts of light onto the acre-long Indiana marble floor. Not that the station needed them: One of its innovations was the use of electric lights, so you’ll see bare bulbs sprinkled throughout the station and on the massive chandeliers that overhang the concourse. Two hundred buildings were demolished to make way for the station, which opened on February 2, 1913, bearing a price tag of $80 million.

As you walk through, take in all of the trendy shops housed in the arteries of the main concourse; the dining concourse below, with the famed Oyster Bar at its heart; and the Campbell Apartments, former office of a finance tycoon and now a fab bar. If you’re traveling with children, take them to the “whispering gallery” right outside the Oyster Bar. Stand on one side of the arch there and have your child stand on the other, and then whisper to each other back and forth; a trick of acoustics allows sound to travel from one side of the vault to the other.

Walking tours of the station are offered via audio tour. Go to www.grandcentralterminal.com/info/tours to download the tour at a cost of $10.