From 30th to 35th St., Tenth Avenue to the West Side Highway 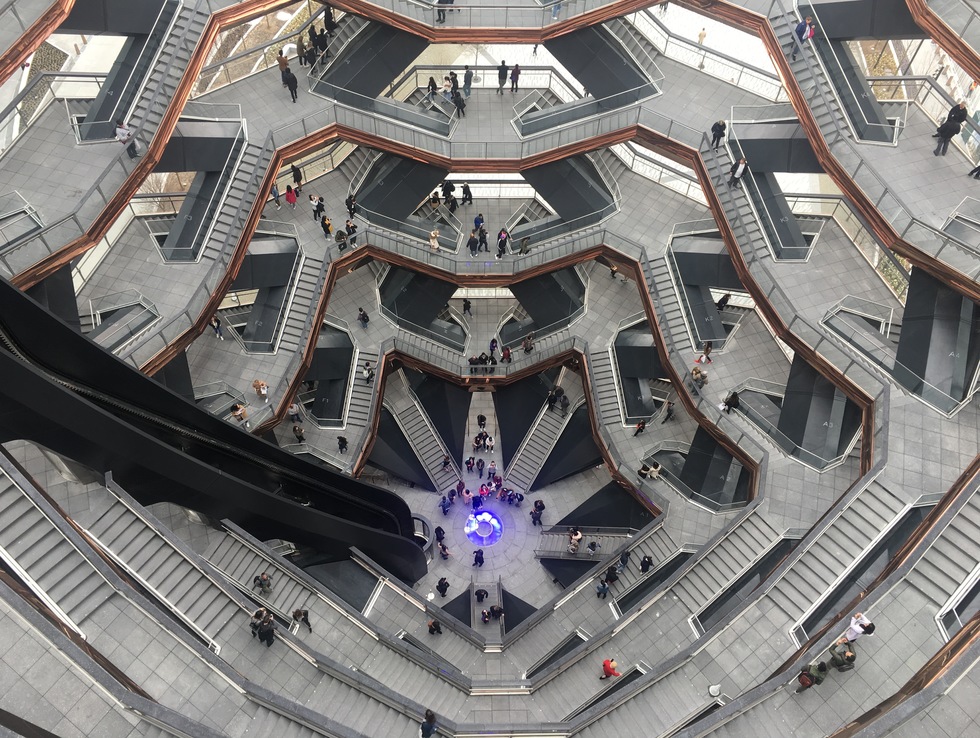 At 28 acres, Hudson Yards is the largest private real estate development in American history. Amazingly, it was built in the most crowded city in the United States without displacing a single resident. That’s because the area it occupies, from 30th Street to 35th Street, and Tenth Avenue to the river, covers the rail yards that shoot out from Penn Station. An extraordinary feat of engineering created a platform above some 30 active railway tracks, with the massive skyscrapers of Hudson Yards resting partially on that platform, and partially on “terra firma”: caissons drilled down into the bedrock of New York at strategic points between both the tracks and the subsurface rail tunnels.

The platform is not only a support: It's wired with cables of all sorts to optimize communications and energy options for residents. Rainwater is collected on building rooftops, and filtered, for onsite irrigation and drinking needs, to reduce stress on the city’s sewer system. There are even cooling units in the platform, to make sure the heat of the train yards doesn’t affect the 28,000 trees, grasses, wildflowers, and other plants in the development’s park areas (the units are also there in case climate change raises area temperatures to levels that will make it difficult for green things to survive without aid).

But all is not peachy with this project. It is, without hyperbole, one of the most unpopular with New Yorkers in recent memory. Many compare it unfavorably with Rockefeller Center, the city’s last large-scale development, a place of unparalleled architectural harmony and symmetry. Unlike that project, which employed a team of architects and designers working in tandem, Hudson Yards is simply a cluster of unrelated skyscrapers, created by half a dozen different architectural firms.  The New York Times, in reviewing the site, wrote that “It is, at heart, a supersized suburban-style office park, with a shopping mall and a quasi-gated condo community targeted at the 0.1 percent. A relic of dated 2000s thinking, nearly devoid of urban design, it declines to blend into the city grid. From a distance the project may remind you of glass shards on top of a wall.” Ouch—but deserved.


More importantly, the often-sneaky use of public funds to underwrite this private luxury development has been galling. In all, the city invested $5.6 billion in Hudson Yards, according to analysts from the New School. That figure covers tax breaks, the extension of the #7 subway line to serve the area, the creation of new parks and roads, purchase of the air rights from the MTA, and other items. In addition, because of blatant gerrymandering, Hudson Yards received $1.2 billion in financing through the Federal EB-5 program, an initiative meant to foster investment in impoverished American communities (something this luxury neighborhood can never claim to be). Related Companies, the developers behind the project, claim that the city will see all its money back….and then some. They have publicly predicted that the development will eventually contribute $19 billion to the city’s Gross Domestic Product (GDP) and $500 million annually in taxes. I won’t be holding my breath. But I won’t be avoiding Hudson Yards, either. There are many sites worth viewing at Hudson Yards, and I think visitors, especially, will find much to excite them here. Read on.
Note: Currently only half of the campus of Hudson Yards is open. The second half, called the West Yard, is expected to debut in 2022.