Btw 48th and 50th Sts. from Fifth to Sixth Aves 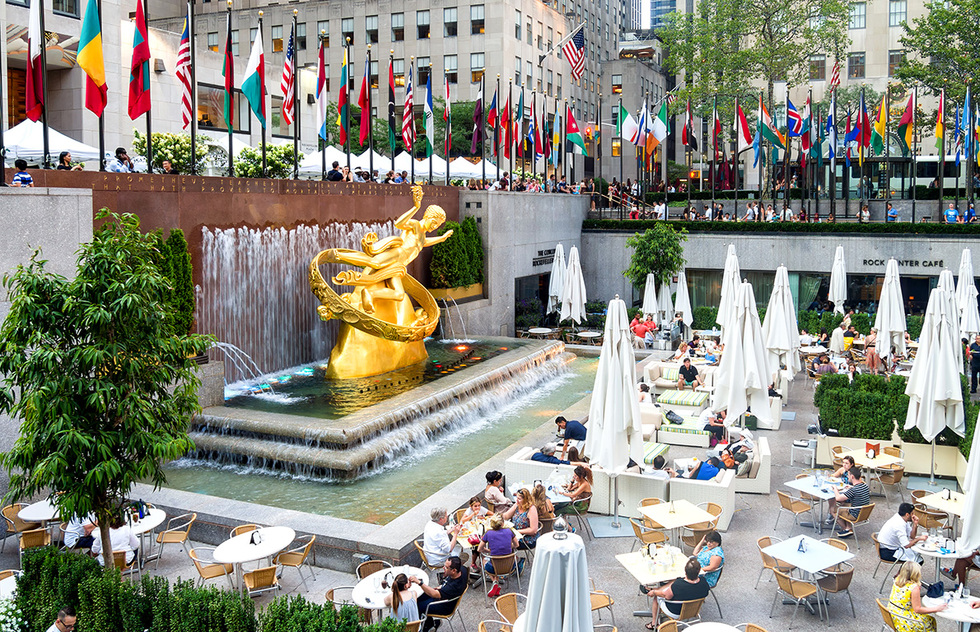 Gotham’s splendid “city within a city” was built in the 1930s at the height of the Depression. Thanks to the jobs it gave construction workers, it was the second-largest employer in the city after the federal Works Progress Association (or WPA) at the time. And it remains a marvel of elegance and aspiration, a several-blocks-wide collection of 19 buildings that, despite their mass, create a space that is airy and light, a welcoming haven for both tourists and residents. No matter how many times I come here, I still get goose bumps on the walk from Fifth Avenue through the gardened central path—called “The Channel,” as it runs between the French and the British buildings.

Follow this channel-like route down to the ice-skating rink (the first commercial one in the world), and the golden statue of Prometheus, or “Leaping Louie,” as wits have called him over the years, his prone position under the soaring vertical of the RCA building making him look like he just jumped. The rink is open October to early April, Mon–Thurs 9am–10:30pm, Fri–Sat 8:30am–midnight, Sun 8:30am–10pm.

There’s much to see at the Rock. Directly behind the statue is where the yearly 70-plus-foot Christmas tree is set on November 20 each year, a plaque marking the space. Take a left and walk toward 49th Street to the small side street with the glassed-in TV studio on the corner. This is where NBC’s Today Show is taped, the small street the area where sign-waving crowds gather every weekday morning, as early as 5:00am, to attempt to get their faces on TV. (When the show has musical performances, guests play on a stage in this narrow alley—it looks much bigger on TV, doesn’t it?)

Stroll next to Fifth Avenue between 50th and 51st streets, where Prometheus’s brother, mighty Atlas, the finest piece of art in the complex (by artist Lee Lawrie), hoists a giant globe on his shoulders, muscles rippling. From the back, Atlas looks a bit like a Christ figure, especially superimposed on St. Patrick’s Cathedral across the street. Go into the lobby behind Atlas for a peek at one of the most magnificent public spaces in the city, the walls bedecked with a rare, swirling Greek marble; the gold “curtains” at the side creating an ever-changing dance of shadows on the ceiling.

Although I don’t recommend the Rockefeller City tour (it doesn’t go anywhere you can’t go yourself, and the guides are a dull lot), the Tour at NBC Studios (www.thetouratnbcstudios.com; [tel] 212/664-7174; $33 adults, $29 seniors and children 6–12; Mon–Thurs 8:20am–2:30pm, 8:20am–5pm on Fridays and select Saturdays and Sundays; subway B, D, F to Rockefeller Center) is an engrossing experience. It recounts the history of TV and radio through videos and visits to NBC’s major studios, including the set for Saturday Night Live and the NBC Nightly News with Lester Holt. Best time to go is Saturday morning, so you can see the sets for Saturday Night Live being constructed, the theater where The Tonight Show with Jimmy Fallon takes place (it’s off limits when Fallon is taping during the week) and watch live as the Today Show is being engineered (visitors get to peer into the glassed-in control rooms).

Also a highlight (literally): Top of the Rock (30 Rockefeller Plaza; www.topoftherocknyc.com; tel. 212/698-2000; basic tickets $36 adults, $34 seniors, $30 ages 6−12, see website for other combo packages; daily 8am–midnight; subway: B, D, F to Rockefeller Center), the 70th-floor Observation Deck at Rockefeller Center. While not as high as the one in the Empire State Building, it gives the latter a run for its money with its own striking views (you have a much better vista of Central Park from here, a grand bumpy green blanket laid at your feet) and its use of timed tickets, which eliminate the painful waits that can sour the experience at its rival. The Rock re-creates very closely the cruise-ship-themed look of the deck from the 1930s, when it was first constructed.

Finally, Radio City Music Hall (1260 Avenue of the Americas at 50th St.; www.radiocity.com; tel. 212/247-4777; $50–$300 show tickets, tour daily 11am−3pm $27 adults, $20 seniors and children 12 and under) remains the kitschy, thrilling delight it’s always been: The Christmas Show is a marvel of excess, with hundreds of people and hooved animals on stage at one time; orchestras magically rising from the pit; and best of all, the Rockettes chorus line, that superhuman all-leg dancing machine.

Those who don’t want to shell out for a show, or who visit when the theater is dark, can take the tour, which is well worth it, to see the exquisite Art Deco features of this sensational pleasure hall and get a picture taken with a Rockette.