Adam Gopnik wrote about Times Square in The New Yorker, “No other part of New York has had such a melodramatic sensitivity to the changes in the city’s history, with an image for every decade.” Think for a moment and those visions of Times Square should start flooding your mind: snazzy clubs and peroxide blonde chorus girls in the 1920s and ‘30s, sailors kissing girls at the end of World War II, the wisecracking small-time hoods of Guys and Dolls in the ‘50s, and, of course, the bleak urban decay of the ‘60s and ‘70s when, as Gopnik put it, “everything fell apart and Hell wafted up through the manhole covers.” 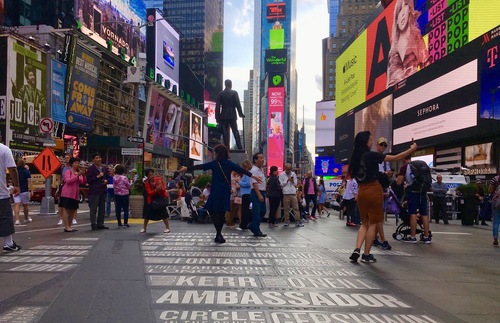 (This tradition of massive “spectaculars” is codified into law. In the 1980s, ordinances were passed requiring that new buildings abutting the Square have 16,000 square feet of light shows on their facades, with “moving elements” that are sufficiently bright.) One of the best views is from the massive stairs atop the TKTS booth at 46th Street.

In 2017, the city finished its project of pedestrianizing large parts of the square, creating 110,000-square-feet of walkable space. Also added: an outdoor performance space for daily events during lunch hour (noon to 2pm) and happy hour (5–7pm). Behind that is a large red staircase to nowhere, that people climb to take photos and take in the view.

Beyond this theater of the streets is the legitimate theater, and Times Square still has more playhouses per acre than any other area in North America. For dawn theater, peer into the sidewalk-level television studios of Good Morning America (44th and Broadway).