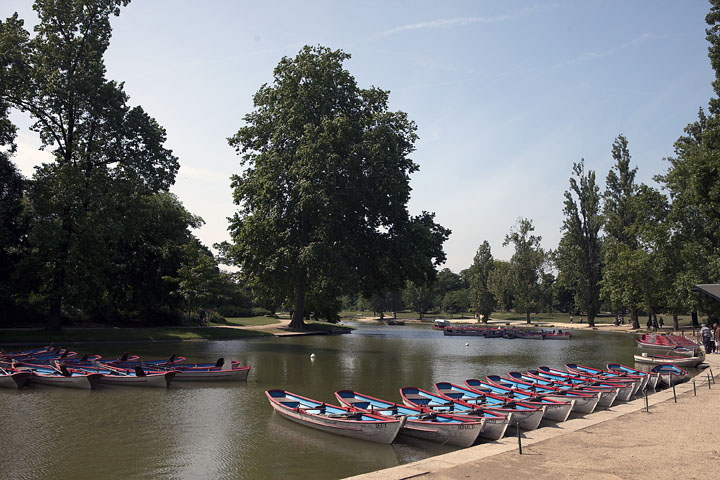 This park doesn’t have as many gardens and restaurants as its western counterpart, but there is more of a sense of wilderness in this vast patch of greenery on the eastern end of Paris. Endless paths and alleys wind through woods and open fields; this is a great place for a long bike ride or a hike. Not that there are just trees here—if rambling isn’t your game, there are plenty of other things to do as well. For starters, there is the recently reopened Parc Zoologique de Paris, a state-of-the-art zoo. Then there are the remains of a medieval castle, the Château de Vincennes, and a large garden in the park, as well as theaters and a hippodrome for those who prefer to sit back and watch the action. In short, Bois de Vincennes has almost as many pleasures as the Bois de Boulogne, if not as much elegance.

Like the Bois de Boulogne, the Bois de Vincennes was once a royal hunting ground with a lodge built by Louis VII back in the 12th century. By the 13th century, it had grown into a castle, which Louis IX (St-Louis) became very fond of; it is said that he dispensed justice under one of the nearby oak trees. It wasn’t until the 18th century, under Louis XV, that these woods were turned into a public park; unfortunately, after the Revolution, the army decided to use it as a training ground, and the castle became a prison (some of its more famous lodgers included the Marquis de Sade and the philosopher Denis Diderot). Needless to say, this did not do wonders for the landscaping. Finally, in the 19th century, Napoleon III made the park part of his urban renewal scheme, and it got the same thorough makeover as the Bois de Boulogne. Its troubles were not completely over, however. In 1944, the retreating German army left the chateau in ruins, but it has since been almost completely restored.

A few of the park’s high points:

* The Parc Zoologique de Paris (aka the Paris Zoo).

* The Parc Floral: Created in 1969, this modern mix of flower beds, ponds, picnic areas, and playgrounds (including a few rides) is a very pleasant place to spend the afternoon, particularly between May and September when the open-air theater holds free music and theater performances. In July, the Paris Jazz Festival takes off for 3 weeks, and in most of August and September, the Festival Classique au Vert cooks up a great program of classical music. For the kids, Guignol puppet shows (http://guignolparcfloral.blogspot.com/; 2.80€ adults and children) play most Wednesdays, Saturdays, and Sundays at 3 and 4pm, and daily during school holidays.

* The Château de Vincennes: It took 12 years to restore this former royal castle (the heart of France’s monarchy until Louis XIV decided to move to Versailles in 1682) and the result—an ivory-colored compound with gracious, turreted ramparts—is truly beautiful. You can visit the imposing castle keep, a gothic chapel with 16th-century stained-glass windows, and the multi-turreted ramparts, on top of which you can take a stroll and pretend you are a knight on the lookout for enemy invaders. For the best views opt for a guided tour of the keep’s upper floors, usually closed to the public, though be prepared for a 250-step climb (av. de Paris, 12th arrond.; http://www.chateau-de-vincennes.fr/en/ 01-48-08-31-20; 9€ adults, 7€ visitors 18–25, free for children 17 and under and E.U. citizens 26 and under; daily mid-Sept to mid-May 10am–5pm, mid-May to mid-Sept 10am–6pm; Métro: Château de Vincennes).

Like the Bois de Boulogne, the park has plenty of other outdoor activities. You can rent bikes in front of either of the two large lakes or on the esplanade by the château or rent boats for rowing around the lake. There are several playgrounds, as well as a farm (La Ferme de Paris), where children can watch cows being milked and sheep being shorn on weekends (daily during school holidays). Thoroughbred racing fans can also check out the hippodrome (www.letrot.com).