Things to Do in The Kennebunks 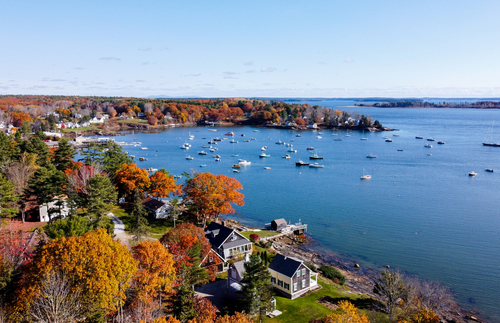 “The Kennebunks” consist of the side-by-side villages of Kennebunk (pictured above) and Kennebunkport, both situated along the shores of small rivers and both claiming a portion of rocky coast. The region was first settled in the mid-1600s and flourished after the American Revolution, when ship captains, boat builders, and prosperous merchants constructed imposing, solid homes.

The Kennebunks are famed for their striking historical architecture and expansive beaches; make time to explore both.

A quick primer: Kennebunk proper is mostly clustered around Route 1, but it stretches towards the coast to the junction of Route 9 and Route 35, an area known as Lower Village. This is where you’ll find the White Barn Inn, The Franciscan Guest House, and much of the town’s hospitality infrastructure. Just across the Kennebunk River from the Lower Village begins Kennebunkport.


But for the river, Kennebunkport’s trim downtown, called Dock Square, is indistinguishable from the Lower Village, leading to frequent confusion about which town one is actually in (which is why Mainers tend to refer to both towns as a unit). On the north side of the river, Kennebunkport extends eastward to take in both million-dollar oceanfront homes (including the Bush family estate at Walker’s Point) and the mellower (and scenic) fishing village of Cape Porpoise.

While summer is the busy season along the coast, winter has its charms: The grand architecture is better seen through leafless trees. When the snow flies, guests find solace in front of a fire at one of the inviting inns.