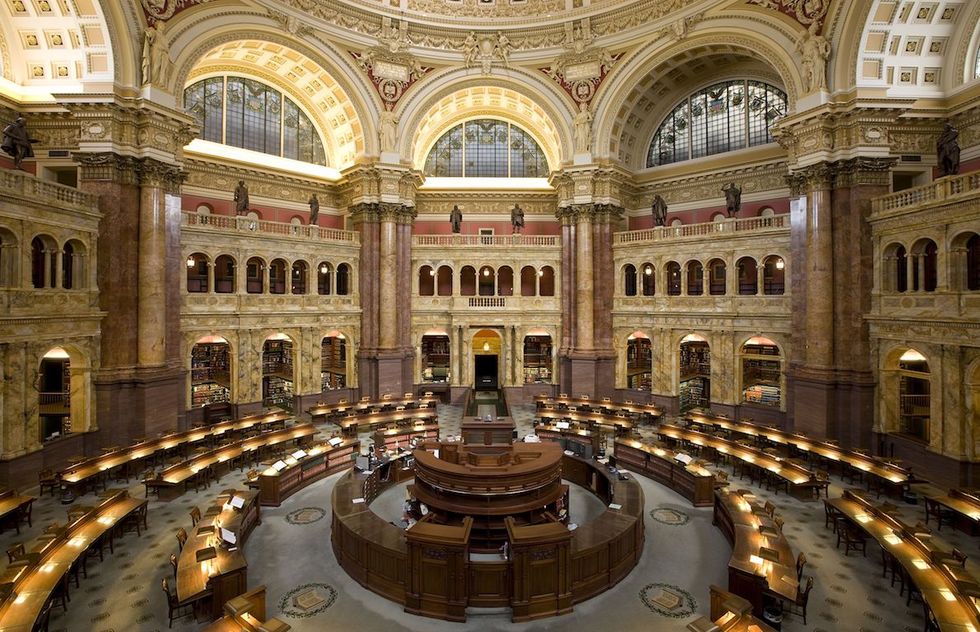 You’re inside the main public building of the Library of Congress—the magnificent, ornate, Italian Renaissance–style Thomas Jefferson Building. Maybe you’ve arrived via the tunnel that connects the Capitol and the Library of Congress, or maybe you’ve climbed the Grand Staircase facing First Street and entered through the main doors. In any case, you’ll likely be startled—very startled—to find yourself suddenly inside a government structure that looks more like a palace. Before you line up for the tour, take time to stroll around the building and just gape. Admire the stained-glass skylights overhead; the Italian marble floors inlaid with brass and concentric medallions; the gorgeous murals, allegorical paintings, stenciling, sculptures, and intricately carved architectural elements. This building, more than any other in the city, is a visual treasure.

Now for the history lesson: Established in 1800 by an act of Congress, “for the purchase of such books as may be necessary for the use of Congress,” the library today also serves the nation, with holdings for the visually impaired (for whom books are recorded and/or translated into Braille), scholars and researchers in every field, college students, journalists, and teachers. Its first collection was destroyed in 1814 when the British burned the Capitol (where the library was then housed) during the War of 1812. Thomas Jefferson then sold the institution his personal library of 6,487 books as a replacement for roughly $23,000 in 1815, and this became the foundation of what is today the world’s largest library.

The Jefferson Building was erected between 1888 and 1897 to hold the burgeoning collection and to establish America as a cultured nation with magnificent institutions equal to anything in Europe. Originally intended to hold the fruits of at least 150 years of collecting, the Jefferson Building was filled up in a mere 13 years. It is now supplemented by the James Madison Memorial Building and the John Adams Building.

Today the collection contains a mind-boggling 170 million items: more than 24 million catalogued books; 72 million manuscripts; millions of prints and photographs, audio holdings, movies, and videotapes; musical instruments from the 1700s; and the letters and papers of everyone from George Washington to Groucho Marx. Its archives also include the letters, oral histories, photographs, and other documents of war veterans from World War I to the present, all part of its Veterans History Project; go to www.loc.gov/vets to listen to or read some of these stories, especially if you plan on visiting the National World War II Memorial. Allow me to point you to the story of one soldier in particular, that of my father, Richard A. Hartman; go to http://lcweb2.loc.gov/diglib/vhp/story/loc.natlib.afc2001001.00067/.

In addition to its art and architecture, the Library exhibits objects from its permanent collections. “Mapping a New Nation: From Independence to Statehood” showcases the first map of the newly independent United States and other maps of the northeastern and southeastern regions of the U.S. An ongoing show is “Shall Not Be Denied: Women Fight for the Vote.” Always on view are two 1450s Bibles from Germany: the handwritten Giant Bible of Mainz and the Gutenberg Bible, the first book printed with movable metal type in Europe.

Using the library: Visitors must register for a timed entry pass to access the library; you can do so at www.loc.gov/visit. At press time, only the Jefferson Building was open to the public, and on a limited basis, on Thursday, Friday, and Saturday between 10am and 3pm. Check the library’s website for updated hours and tour availability, as the schedule is likely to change.

If you’re looking to use the library’s collections for research, you will need to obtain a user card with your photo on it  (see wwws.loc.gov/readerreg/remote/). Once you’ve registered for your user card, you’ll need to make an appointment in a specific reading room by calling that room’s phone number (listed on the library’s website) or use the online Ask-a-Librarian service at ask.loc.gov. All books must be used on-site.