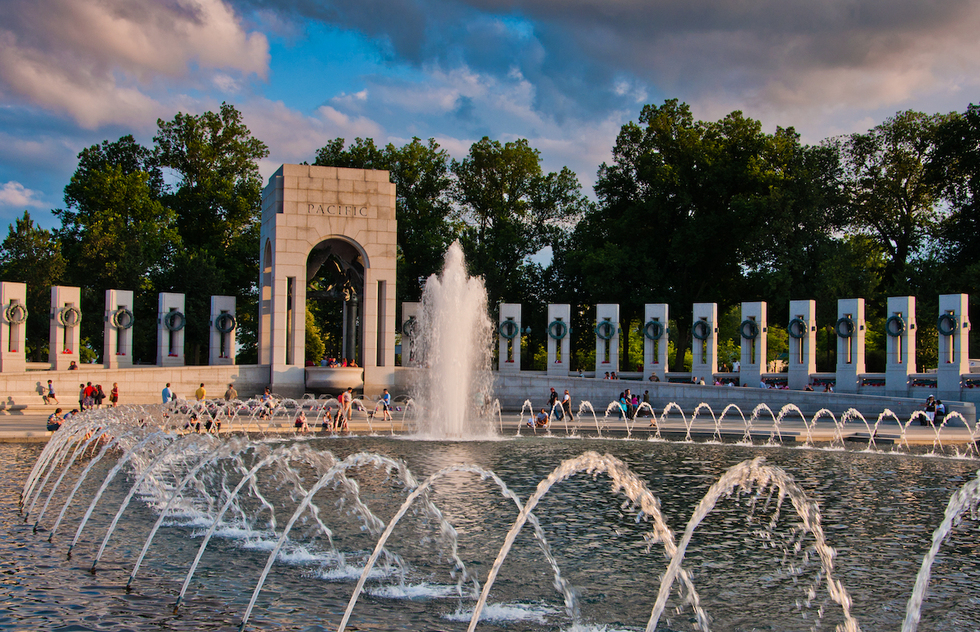 When this memorial was dedicated in 2004, 150,000 people attended, among them President George W. Bush; actor Tom Hanks and now-retired news anchor Tom Brokaw, both of whom had been active in soliciting support for the memorial; and most important, thousands of World War II veterans and their families. These legions of veterans—some dressed in uniform, many wearing a cap identifying the name of their division—turned out with pride, happy to receive the nation’s gratitude, 60 years in the making, expressed profoundly in this memorial.

Designed by Friedrich St. Florian and funded mostly by private donations, the memorial fits nicely into the landscape between the Washington Monument grounds to the east and the Lincoln Memorial and its Reflecting Pool to the west. St. Florian purposely situated the 7 1/2-acre memorial so as not to obstruct this long view down the Mall. Fifty-six 17-foot-high granite pillars representing each state and territory stand to either side of a central plaza and the Rainbow Pool. Likewise 24 bas-relief panels divide down the middle so that 12 line each side of the walkway leading from the entrance at 17th Street. The panels to the left, as you walk toward the center of the memorial, illustrate seminal scenes from the war years as they relate to the Pacific front: Pearl Harbor, amphibious landing, jungle warfare, a field burial, and so on. The panels to the right are sculptured scenes of war moments related to the Atlantic front: Rosie the Riveter, Normandy Beach landing, the Battle of the Bulge, the Russians meeting the Americans at the Elbe River. Architect and sculptor Raymond Kaskey sculpted these panels based on archival photographs.

Large, open pavilions stake out the north and south axes of the memorial, and semicircular fountains create waterfalls on either side. Inscriptions at the base of each pavilion fountain mark key battles. Beyond the center Rainbow Pool is a wall of 4,000 gold stars, one for every 100 American soldiers who died in World War II. People often leave photos and mementos around the memorial, which the National Park Service gathers up daily for an archive. For compelling, firsthand accounts of World War II experiences, combine your tour here with an online visit to the Library of Congress’s Veterans History Project. Click here for more info.

From the 17th Street entrance, walk south around the perimeter of the memorial to reach a ranger station, where there are brochures as well as registry kiosks for looking up names of veterans (also at www.wwiimemorial.com).