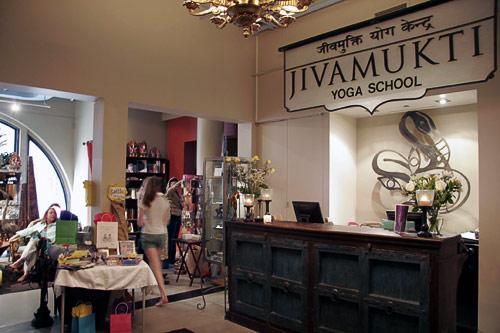 When you're on the road, you could stick with the hotel gym, or you can join a local yoga class for an insider's look at a city.

New York City alone has about 300 yoga studios, according to Brette Popper, publisher of YogaCity NYC (www.yogacitynyc.com). That number, which is primarily concentrated in Manhattan, doesn't include yoga in gyms or community centers. Compare that to about 170 Starbucks locations in New York City, and you can start to understand the importance of yoga to the city's stressed-out residents. If you're still unconvinced, the largest yoga gathering in the world -- 10,000 yogis -- will take place on the Great Lawn of Central Park on June 22.

From vinyasa to doga (yoga for dogs), you can find every conceivable style of yoga in New York City. The classes listed here range from soothing to intense. Most of these studios offer one-time-only discounts to new students. In all these studios, classes are packed on weekdays after work and weekends before brunch (another important New York institution). So either arrive early, or go during an off hour. All these studios have mats available for rent, so there's no need to lug one on the plane with you.

Yoga chains with outlets in New York include Bikram Yoga (www.bikramyoga.com), Pure Yoga (www.pureyoga.com), and YogaWorks (www.yogaworks.com), all popular studios that feature some of the city's most sought-after teachers. Browse the extensive listings at YogaCity NYC (www.yogacitynyc.com) for more studios, classes, events, and workshops. 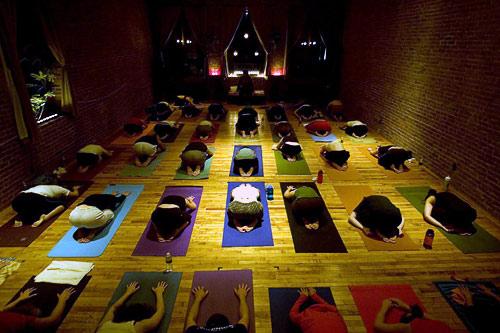 Connie Aramaka
Yoga to the People: East Village
Given the name, you likely don't need much explanation for what "Yoga to the People" is all about. This studio thrives on the idea that yoga class is what you make it. Hence, there are no levels or degrees of difficultly. Beginners and seasoned yogis practice together, and the teachers strive to structure their classes to suit the needs of all students. The studio runs on a donation-basis, so give as you see fit by anonymously dropping payment in a box at the entrance. Yoga to the People has perhaps the best location of the bunch for post-class exploring: it's sandwiched between the Japanese noodle shops, punk-rock clothing stores, and college bars of St. Marks Place. Other locations are on 27th Street between 6th and 7th avenues (hot yoga), and 38th Street at 6th Avenue (power vinyasa).

How Much: Each 60-minute class has a suggested $10 donation. 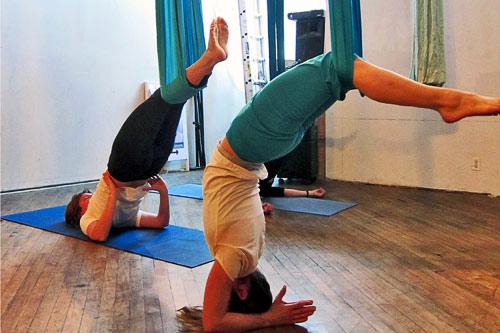 Kenneth Feldman
Aerial Yoga: Williamsburg, Brooklyn
Take the L train one stop into Brooklyn on a Tuesday night or a Saturday afternoon for Michelle Dortignac's Aerial Yoga, a unique hybrid of yoga and aerial dance. Dortignac blends basic aerial acrobatics with yoga to give students a deeper stretch, powerful core exercises, and a weightless yet fully supported inversion. Classes are held in an artist's loft hung with silk trapeze only a foot or so off the ground. Dortignac's sensible approach inspires confidence in even the most cautious students. No previous yoga or acrobatics experience required; classes are small, and all students receive personal instruction. Classes are also held at the Jewish Community Center in Manhattan (334 Amsterdam Ave.; tel. 646/505-5716, ext. 570) 6:30pm-7:45pm Fridays. 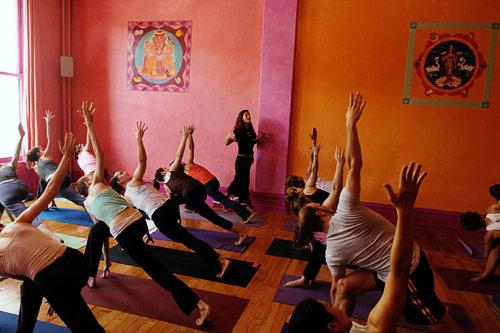 Laughing Lotus Yoga Center
Laughing Lotus: Chelsea
Fast-flowing classes at this pink and orange studio in Chelsea are held in a huge factory loft. The teachers are comfortable discussing Sanskrit and yogic philosophy to a soundtrack of eclectic contemporary music. Midnight Yoga, held every Friday from 10pm to midnight, features live music and a yoga-jam atmosphere. All proceeds from the (often sold-out) Saturday noon class go toward a different charity each month. Founders Jasmine Tarkeshi and Dana Flynn teach several two-hour classes a month, which attract students from across the Eastern seaboard. Sign up in advance. 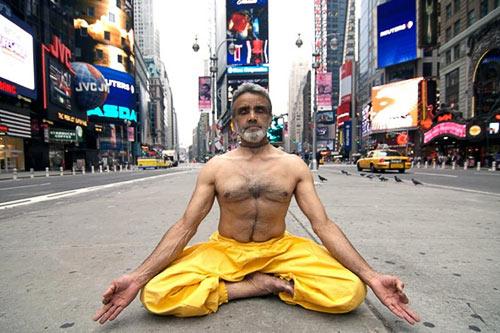 Dharma Yoga Center
Dharma Yoga Center: Gramercy Park
New York-original Dharma Mittra has been teaching yoga, meditation, and pranayama (breathing exercises) at his studio perched above 3rd Avenue since 1974. Mittra is revered as one of America's original yoga teachers and remains one of the city's most accessible teachers from the old school. He gives weekly classes and monthly three-hour open-level workshops that combine yogic philosophy and physical practice. Students receive personal instruction from the master. The studio space is homey, well-lived in, and has a distinct '70s feel -- it's carpeted. Watch for specials and discount classes.

Dharma Mittra is a master of calm and poise in Times Square.
Courtesy Dharma Yoga Center 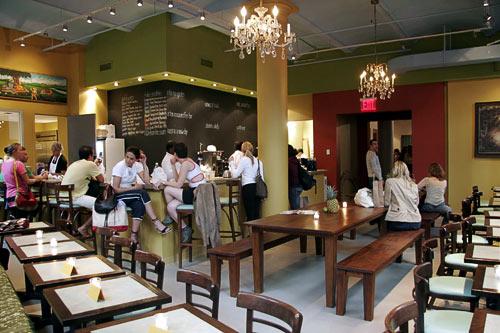 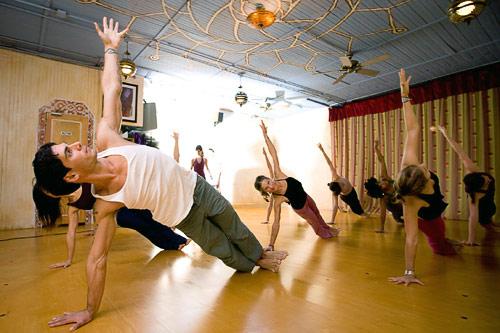 Joel Fitzpatrick
Kula Yoga Project: Downtown
Welcome to the new school of yoga. These classes are held in a converted walk-up apartment, and make for the ultimate New York yoga experience. Be warned: it's crowded. Classes get hardcore hipster names like "Flight School," "Honey," and "Multi Intenso" -- and live up to the hype. The New York Times recently declared director Schuyler Grant's in-demand class the best advanced yoga class in the city. Wear your best moisture-wicking workout clothes. Grant is also a founder of the Wanderlust Festival (www.wanderlustfestival.com), a music and yoga summer festival in California. 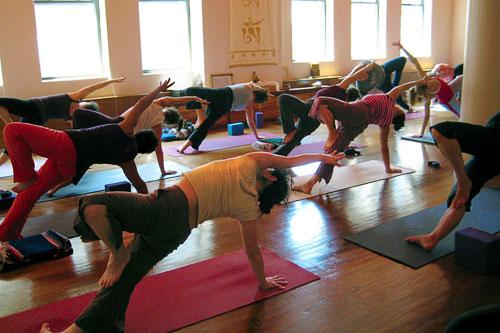 OM Yoga Center
OM Yoga: Union Square
Stacked on top of the Strand Bookstore, OM Yoga is the vision of Cyndi Lee, who combines vinyasa yoga with Buddhist meditation and mindfulness practices. Lee is one of the country's most recognizable yoga teachers -- thanks to her popular books and DVDs -- and she has built a reputation on intuitive, accessible, and high-quality yoga. Classes here are guided by the very simple concept that yoga should be approachable and suited to each student, making OM Yoga a great community for beginners. Yoga-seekers often gather from across the U.S. to take classes here. Though Lee frequently teaches the OM Yoga style around the world, she is set to spend this summer in New York.

How Much: Frommers.com readers receive up to three classes for $10 each (valid only for visitors with proof of I.D. and an e-mail address. This offer is valid for July and August. Mention Frommers.com at the front desk). For everyone else, $12 per 60-minute class or $18 per 75- to 90-minute class; $28 introductory pass for two classes in one month. 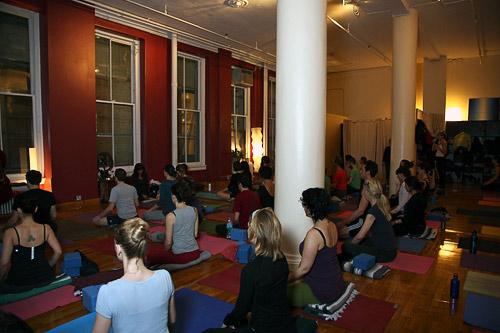 Virayoga
Virayoga: SoHo
This Anusara yoga studio is lead by respected teacher Elena Brower. Classes are conducted like workshops, with a select few poses held and analyzed in detail, often with philosophical conclusions. Students occasionally work in pairs or small groups to understand the anatomy of each pose. The studio's gorgeous loft in SoHo has several only-in-New York architectural quirks, like columns in the middle of the practice space, picture windows looking into an airshaft, and bathrooms shared with office workers on the same floor. Sign up for Brower's classes in advance, or arrive an hour ahead of time and get in line. Brower will also lead the Yoga at the Great Lawn (www.flavorpill.com/yoga) event in Central Park on June 22.

Photo Caption: A crowded class at Virayoga, hidden from the noise and traffic on Broadway.
Courtesy Virayoga 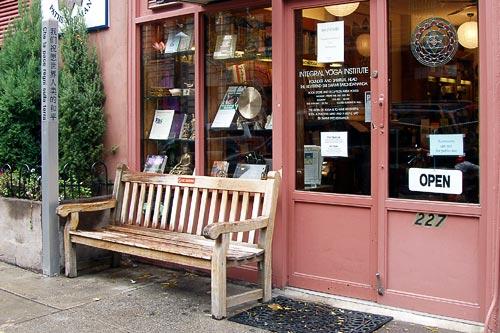