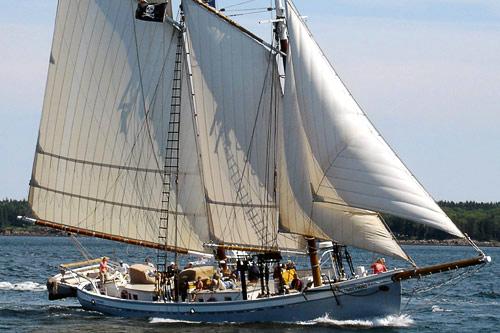 By
Setting Sail
By Matt Hannafin

Most people who go on cruises think that they're "sailing," but usually they're not. That distinction belongs to the relatively few souls who opt to take their seagoing vacation the old-fashioned way: aboard a ship with real sails, going where the wind takes it. Until the early 19th century, sails were literally the only game in town, and these days, with the world slowly transitioning from carbon-based fuels to a wooly stew of alternatives, what's old is very much new again: In the cruise biz, sailing ships are the cutting edge of sustainability -- and also terribly romantic in that buccaneering, Pirates of the Caribbean kind of way. The contemporary sail-cruise world, such as it is, actually offers several types of experiences, from rustic floating B&Bs to veritable sailing mansions to small-scale cruise ships that just happen to fly sail. Consider this slideshow Installment One, introducing the kind of experiences available on some of the tiny, mostly owner-operated ships that sail in Maine, the Caribbean, British Columbia, and Alaska. 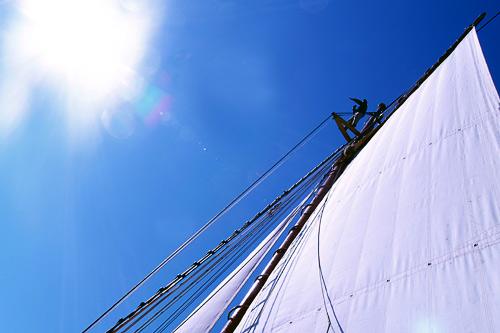 Matt Hannafin
Sailing with American Eagle
The central fact of sailing ships is their sails, a technology that mankind has been refining since at least 3,000 B.C., when the Egyptians and Sumerians began using them. The Greeks, Phoenicians, and Chinese followed suit sometime later, but the technology didn't reach its full potential until the 15th century A.D., when the first of the true tall ships were developed. By the 18th and 19th centuries, fully rigged ships flew upwards of 20 sails from three or more masts, allowing them to derive the most oomph from all available wind. Today, most sailing cruise ships are schooners -- ships whose sails run fore and aft (as opposed to port to starboard) and which have at least two masts, with the shortest in front. Most of the small, owner-operated sail-cruise ships rely on wind for nearly all their propulsion, though many will crank up their engines from time to time, when they need to get on schedule and the wind isn't cooperating.

Launched in 1930, the 26-passenger American Eagle was a fishing schooner for 53 years before being refurbished for passenger sailing. She's a gorgeous, immaculately maintained vessel, with a sleek profile and gleaming, polished woodwork. Named a National Historic Landmark in 1991, she's the only schooner among the Maine coast fleet that's certified to sail internationally, enabling her to make an annual cruise to Canada. Casual like all the Maine schooners, she offers long sailing days, nights anchored in quiet coves, beach lobster feasts, and time ashore in small coastal towns. In the evenings, Captain John Foss often reads Maine stories and poems appropriate to the day's sights. American Eagle is one of more than a dozen schooners that sail the Maine coast in summer, offering 3- to 6-night cruises. (Information: www.schooneramericaneagle.com. Info on many other Maine schooners is also available at www.sailmainecoast.com)

Photo Caption: A mate scans Maine's waters from the crow's nest aboard the schooner American Eagle. 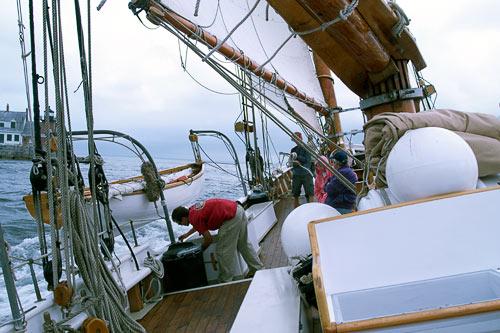 Matt Hannafin
Rocking the Boat
Another central fact: When a mighty wind hits a mighty sail, your ship will heel. Most travelers aboard the big cruise ships have experienced rolling (when a ship moves from side to side due to the action of the sea) or pitching (the same feeling, only front to back), but heeling is something entirely different -- less bobbing like a cork, and more like flying: powerful, inexorable, and exhilarating. Heeling can also test your balance, and explains why things like boat shoes were invented. When the deck is suddenly at a 30 degree angle, you want to be sure you've got grip. 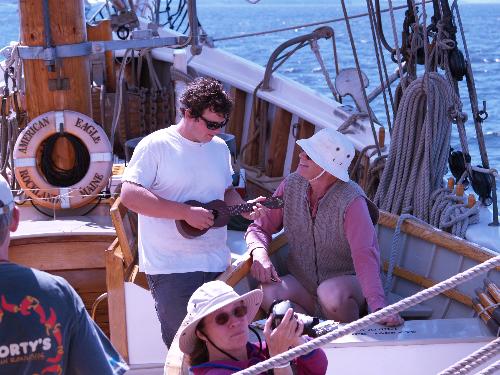 Matt Hannafin
Kinda Rocking the Boat
Aboard the small sailing ships, the vibe is almost uniformly casual, quiet, and collegial, with simple accommodations, simple meals, and mostly do-it-yourself entertainment. On the Maine schooners, many captains and crewmembers are musicians themselves, and guests who play suitably folky, maritime instruments are encouraged to bring them aboard. Electric bass? No no no. Guitar, concertina, or ukulele? Yes yes yes.

Photo Caption: A crewmember and a passenger compare ukulele chords aboard American Eagle. 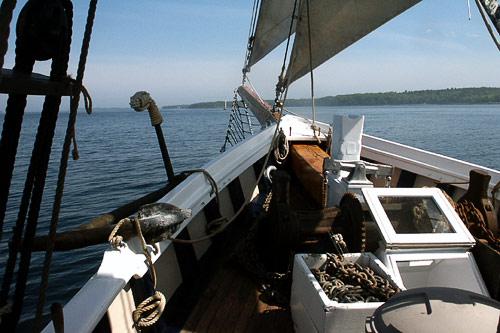 Matt Hannafin
Aboard Timberwind
Built in Portland, Maine, in 1931, Timberwind spent the first 38 years of her life stationed 18 miles off Portland Head, taking pilots to meet large ships that had to be navigated into port. She was converted for passenger sailing in 1969, designated a National Historic Landmark in 1992, and today is one of the most rustic vessels in the fleet, affording a real back-in-time experience. Captain Bob Tassi was a Nashville studio engineer before chucking it all to become a schooner man, and evenings frequently find him playing guitar out on deck. When I sailed, a framed portrait of Frank Sinatra in the galley added an incongruous grace note to what's otherwise a nearly 19th-century sailing experience. (Information: www.schoonertimberwind.com)

Photo Caption: In Maine aboard Timberwind. 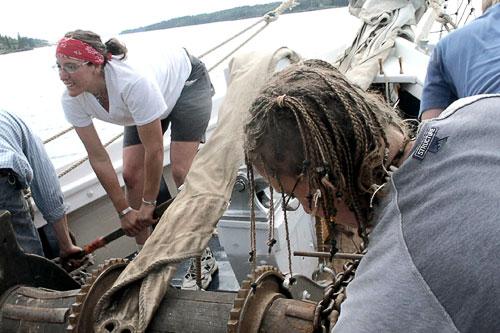 Matt Hannafin
Manual Labor
The most rustic of the sailing ships do without generated power entirely, save for battery-powered lights and navigational equipment. Aboard some (including the Maine schooner Timberwind, pictured), even the anchor has to be cranked up by hand. The captain sometimes asks passengers if they'd like to lend a hand, and some (like me) say "sure." This is a very, very bad idea unless you are in very, very good shape. 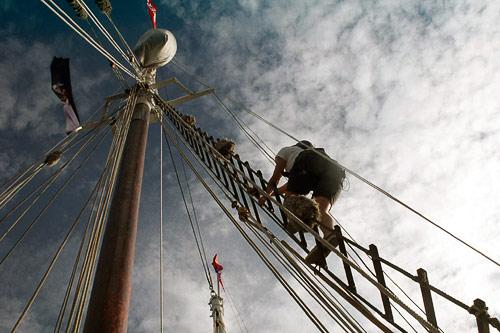 Matt Hannafin
Timberwind's Rigging
A less strenuous activity in which passengers can also partake aboard most of the small sailing ships is helping with the sails, or occasionally climbing up into the rigging to get a look-see. The captains and crews are happy to give passengers a quick sailing education, teaching how to set the sails for various wind conditions. Often, passengers can even take a hand at the wheel. 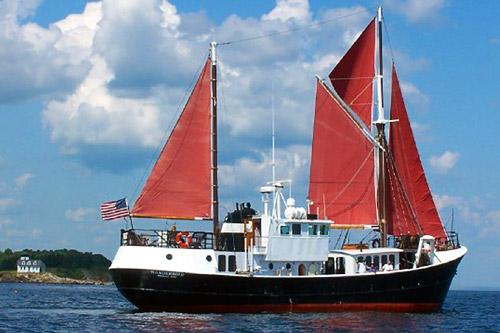 Wanderbird Expedition Cruises
Aboard Wanderbird
As proof that sails are the new black, we have the tiny, 12-passenger Wanderbird. This cute but notably oddball vessel began life as a Dutch-built fishing trawler, which plied the North Sea from 1963 until 1990. When Captains Rick and Karen Miles bought and converted her for passenger sailing, they added a traditional ketch sailing rig to provide auxiliary power and visual pizzazz. Captains Rick and Karen operate with a tiny crew and even travel with their three dogs as mascots, sailing itineraries in Maine, Newfoundland, Greenland, and the Caribbean. (Information: www.wanderbirdcruises.com) 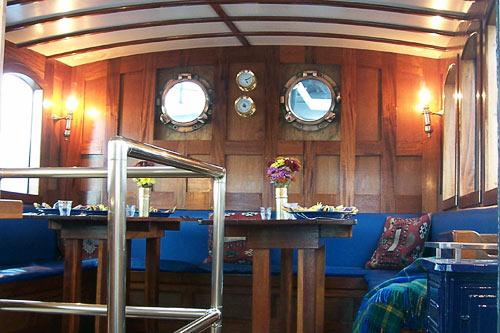 Wanderbird Expedition Cruises
Inside the Ship
The smaller the vessel, the more basic and cozy the amenities. Wanderbird actually provides more interior space and comfort than many, with an enclosed "coach house" on the top deck, a "salon" room below deck, and a warm, cozy galley. Meals are taken inside or out in the open, as weather dictates, which is the case aboard most sailing vessels this size. 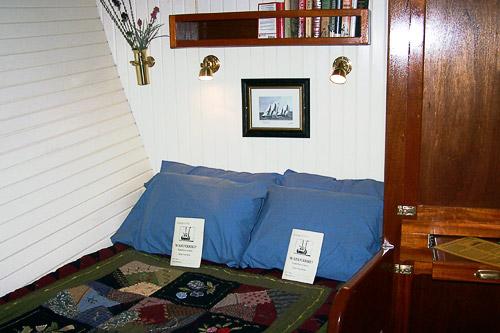 Wanderbird Expedition Cruises
Ship-Shape Room
Wanderbird's cabins are illustrative of the kind of tiny, just-big-enough accommodations aboard most small, owner-operated sailing cruisers, though it ups the ante with a private toilet and shower in each cabin. (Most small sail-cruisers have shared facilities.) Many other vessels' cabins also offer bunk-bed arrangements and just a sliver of floor space, with a small sink. Aboard American Eagle, my wife and I realized that one of us had to stay in bed or even leave the cabin while the other dressed -- there just wasn't room for us both to stand. No worries, though: On ships like this, cabins are for sleeping only. During the day, you're out on deck with the wind in your hair.

Photo Caption: A cabin aboard Wanderbird. 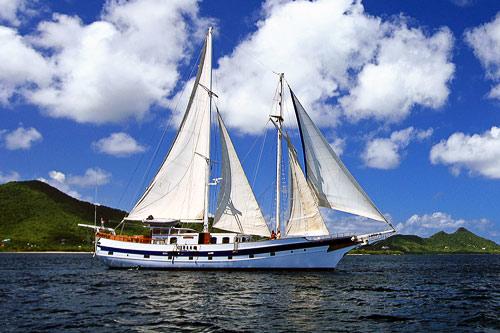 Island Windjammers
The New Windjammers
Island Windjammers is the newest name in the sail-cruise world, founded by former customers and employees of much-missed Windjammer Barefoot Cruises, which operated the largest fleet of tall ships around before it went spectacularly belly-up in 2007. In 2009, the good folks behind Island Windjammers purchased the 101-foot, 12-passenger brigantine schooner Diamant and began offering cruises among the gorgeous Grenadine Islands. Though the line consciously tries to emulate the ultra-casual Windjammer Barefoot vibe and does whip up the iconic rum swizzles in the evening, it shies away from the heavy drinking and risqué party atmosphere that sometimes sent the Windjammer Barefoot ships over the edge. (Information: www.islandwindjammers.com) 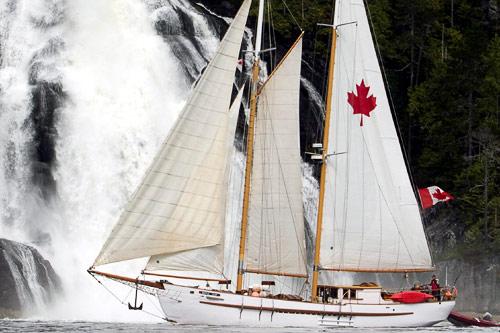 Maple Leaf Adventures
Canada's Maple Leaf
On the other side of North America, Maple Leaf Adventures is one of the few companies offering sailing-ship cruises in British Columbia and Alaska. Their ship, the 92-foot schooner Maple Leaf, is a onetime pleasure yacht (built in 1904) that spent six decades as a fishing vessel before being reconverted back to passenger use. She carries just eight passengers in small but supremely nautical-looking cabins, full of gleaming woodwork. Cruises are focused on nature and cultural history, and kayaks are carried aboard for use while the ship is at anchor. (Information: www.mapleleafadventures.com) 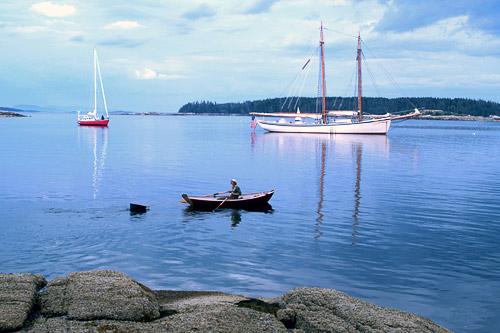 Matt Hannafin
Finding Peace at Sea
When it comes right down to it, this is why people opt for sailing ships: quietude. Whereas your average cruise ship actually amps up at night, offering a zillion entertainments and distractions until the wee hours of morning, your average small-scale, owner-operated sailing ship will anchor at nightfall, setting out meals on deck and then just sort of letting night come down around it. Will there be music? There might. Will there be a nice glass of rum? There might. And then, you'll sleep like a baby as your ship bobs gently and the wooden boat creaks. You probably won't even miss the casino.