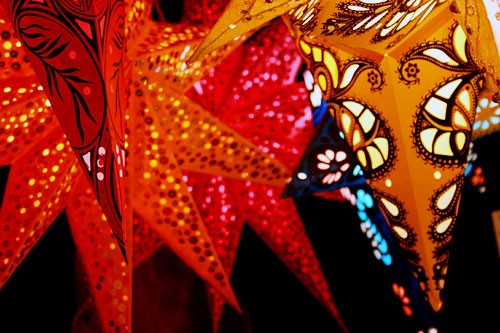 By Laura Kiniry
From illuminated boat parades to spectacular light extravaganzas, towns and cities around the world each have distinctive ways of celebrating the holiday season.

Though New York City and Paris lead the pack with iconic holiday decorations, the cities of Madrid, Melbourne, and six other destinations around the world are arguably just as festive and brilliant. 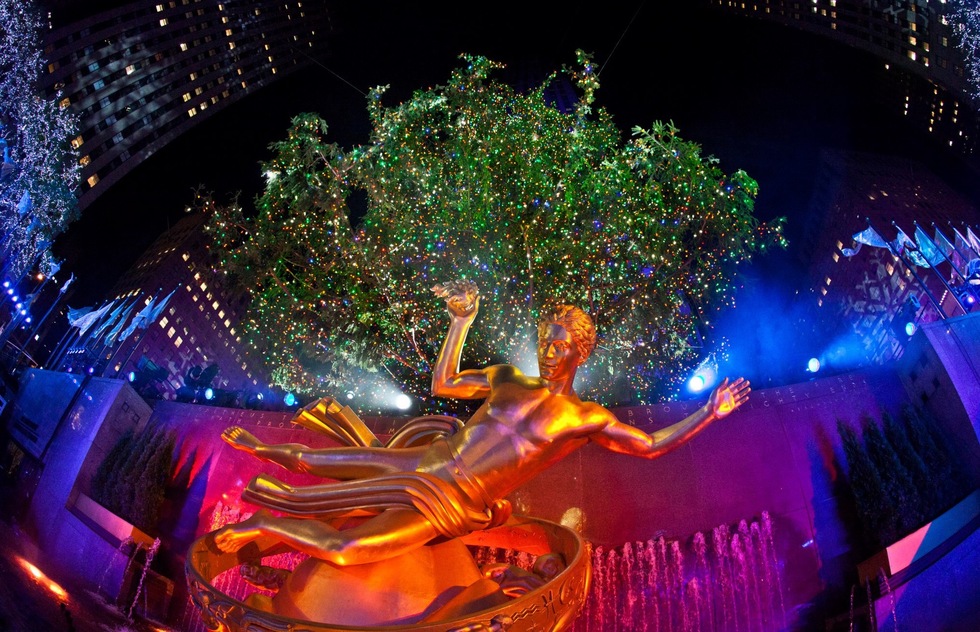 Elaborate holiday window displays are another reason to visit New York City in the winter -- look for them along Fifth Avenue at Lord & Taylor (38th St.), Bergdorf Goodman (57th St.), and Saks Fifth Avenue. Other classics include Bloomingdale's Chrismas windows (Lexington Ave. between 59th and 60th streets), and Macy's (Herald Square, between 34th and 35th on Broadway). The Harry Potter Store (at 22nd and Fifth Ave.) also puts on an excellent show in its windows.

Celebrate Hanukkah in front of the Plaza Hotel (Fifth Avenue and 59th Street) with the world's largest menorah: a 32-foot-high, two-ton, gold-colored steel structure. A lighting ceremony takes place each evening during the Hanukkah holiday.

When: From Thanksgiving through the week after New Year's. 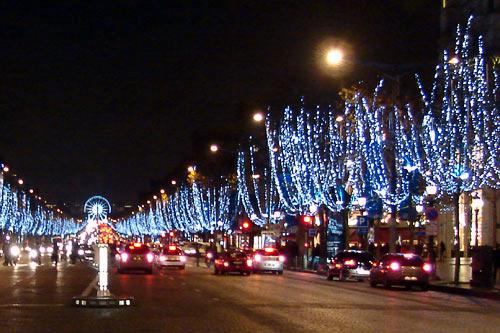 Frommers.com Community
Paris, France
What: City of Light indeed, especially during the holidays. From the Arc de Triomphe to the Place de la Concorde, the Champs-Élysées is brought to life each evening with hundreds of thousands of fairy lights sparkling from the avenue's trees. This famed stretch in Paris also hosts its own Marché de Noel, a Christmas market featuring artisans, food, and holiday-themed vendors. For one of the city's most festive holiday window displays, don't miss Galeries Lafayette, on Boulevard Haussmann in the 9th arrondissement. Another classic landmark is the main plaza in front of Notre-Dame Cathedral, where a holiday tree is dressed in lights and baubles. 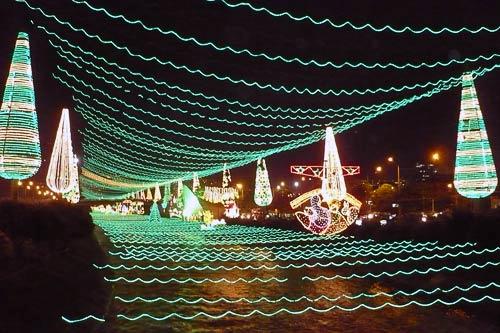 chilangoco
Medellin, Colombia
What: Perhaps one of the world's most stunning displays of animated lights and color, Colombia's second largest city takes los alumbrados to a new extreme. Medellin is known for its Christmas Lights Fiesta, an annual holiday celebration that illuminates the night sky with exquisite scenes and giant 3D figures each year.

You'll find the most impressive light displays on the Rio Medellin -- which runs through the city center -- and in downtown Medellin. For an incredible overview, climb among brightly lit trees to the top of Cerro Nutibara, a natural hillside rising 260 feet above the city on the river's western bank.

When: Early December through mid-January 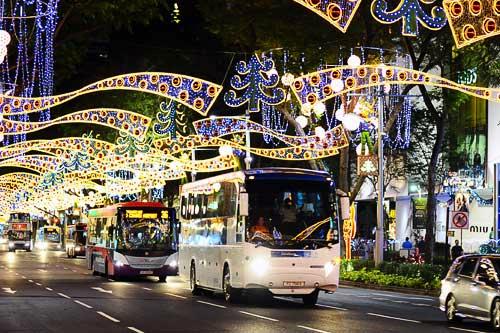 Singapore Tourism Board
Singapore
What: Since 1984, Singapore has celebrated Christmas in the tropics with an annual Christmas Light-up in its main shopping district. The heart of the festivities is Orchard Road, where strings of dazzling lights hang above traffic, towering Christmas trees add scenery, and businesses adorn their exteriors in holiday décor to battle it out for title of Best Dressed Building. Open-top buses that travel along Orchard offer some of the best views of the holiday displays.

At the height of the season, Celebrate Christmas in Singapore (CCIS) infuses Orchard Road with a week of music, performances, and a series of decorated floats all honoring the holiday's religious aspect. The Christmas Light-up also extends to Marina Bay, which boasts its own annual theme. 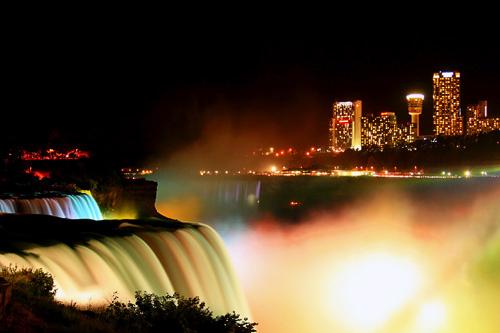 © CAA Winter Festival of Lights
Niagara Falls, Ontario
What: Over three million colored lights and more than 125 animated light displays illuminate a 5K route along Niagara Parkway in the Canadian province of Ontario, transforming this portion of Niagara Parks into its own winter wonderland.

As part of the CAA Winter Festival of Lights, keep an eye out for the world's largest illuminated Canadian-American flag and the country's largest illuminated menorah. Also popular are the animated Enchantment of Disney displays, which include popular Disney and Pixar classics aglow in colorful holiday lights. Fireworks brighten the sky most evenings around 9pm -- catch them from Table Rock Centre near the edge of the Horseshoe Falls.

When: Early November through late January

Fun Fact: Niagara Falls was illuminated for the first time in 1860 using approximately 200 Bengal lights, a type of light once used for signaling ships. 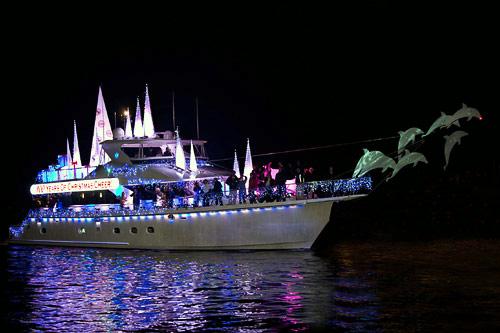 www.visitnewportbeach.com
Newport Beach, California
What: Since its original synchronization in 1908, the longest-running holiday boat parade in the U.S. is also the country's best: more than 100 seafaring vessels draped in colorful lights and sporting animated figures like Christmas trees and snowmen sail Newport Harbor for nearly three hours each evening. The best places to watch the parade include the public docks and outer walkway of Balboa Island, where you'll also find carolers and kids selling cups of hot cocoa.

Homeowners on and around Balboa Island do their share by decorating their properties with sparkling lights and accessories like animatronic Santas and fake snow dispensers. Expect a lot of creativity for this year's theme: 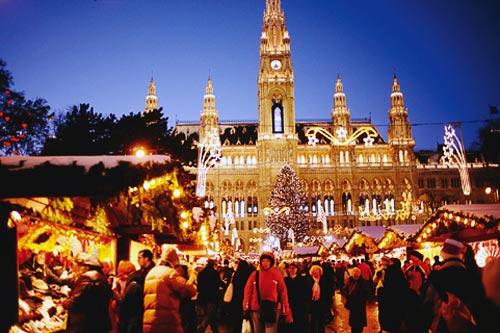 © WienTourismus/Peter Rigaud
Vienna, Austria
What: Vienna's exquisite architecture lends an old world charm to the annual December holidays, with the inner city awash in tiny flickering lights. The famed shopping streets of Graben and Kärntner Strasse host some of the city's most dazzling light displays.

When: The end of November through Christmas. 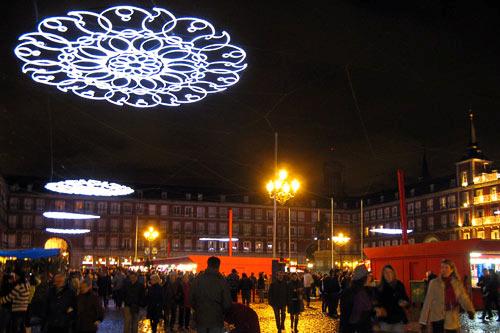 trinchetto
Madrid, Spain
What: Though more elegant and subdued than in other parts of the world, Madrid's holiday lights are just as spectacular, especially along the city's main boulevards of Gran Via and Paseo del Prado. The city's largest holiday market is held at the Plaza Mayor, Madrid's most famous square. Dating back to 1860 and featuring more than 100 stalls, the market is the go-to place for traditional holiday items, including Christmas trees and nativity figures.

When: Throughout December, with lights extending into the first week of January.

Fun Fact: The Belen, or nativity scene, is one of Madrid's most beloved holiday traditions. Look for them in plazas and in front of homes, churches, and museums. 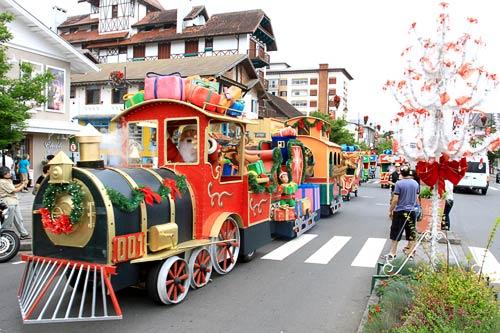 Cleiton Thiele
Gramado, Brazil
What: Each holiday season since 1986, the small mountain town of Gramado in Brazil's Rio Grande do Sul has been transforming itself into an incredible Christmas Wonderland with its two-month-long Natal Luz, or Christmas of Light, celebration.

With more than a dozen reoccurring events and performances to choose from -- including a puppet theatre and an orchestrated Christmas tree light show -- there's no shortage of things to see and do. Highlights include the Grand Christmas Parade (an evening procession of skating angels, snow queens, and Santa Claus that takes place along Avenida das Hortênsias) and Nativitaten (an outdoor holiday opera on Lake Joaquina Rita Bier with dancing fountains and fireworks).

When: Early November through mid-January

Photo Caption: The Natal Luz, or Christmas of Light, celebration in Gramado, Brazil. 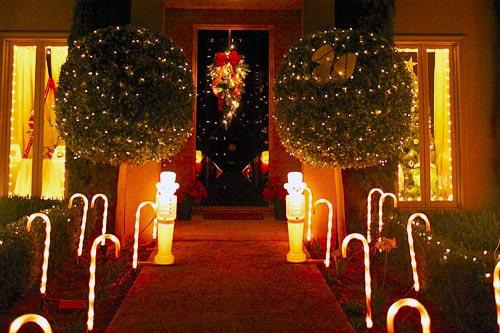 A definite downtown stop is the Myer Department Store on Bourke Street, home to an annually changing holiday window display that's been a Melbourne tradition since 1956. The city's towering Christmas tree, located at the City Square on Swanson Street, lights up in early December.

When: Early November through December