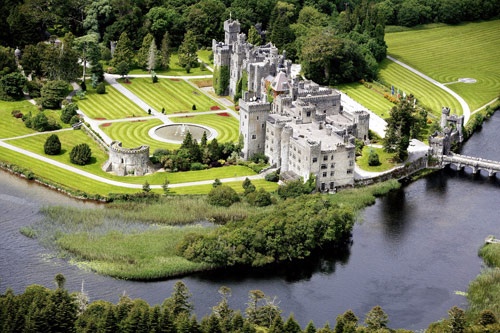 Courtesy of The Leading Hotels of the World

By Hillary Richard McNamara
The days of high kings and feudal lords may be long gone, but ancient castles are scattered throughout the Emerald Isle.

Many of these historic structures have been refurbished and converted into hotels and resorts, offering every traveler a chance to experience medieval Ireland in comfort and style. 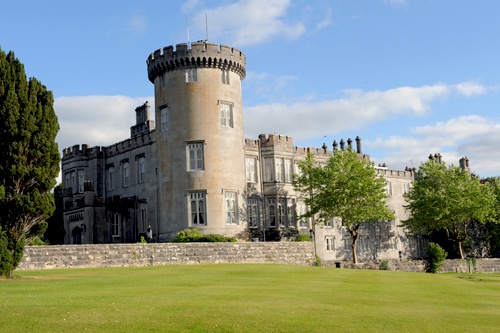 Courtesy of the Dromoland Collection
Dromoland Castle, County Clare
What: Dromoland Castle, which dates back to the 16th century, is set on more than 410 acres along the shores of Lough Dromoland. The castle was originally the home of the O'Briens, the royal descendants of Brian Boru, the High King of Ireland.

Dromoland has made every effort to keep the country house's classic baronial features and décor. The estate has 99 guest rooms, including 14 suites. Guests can partake in the royal sport of falconry on the castle grounds.

Where: Dromoland Castle is in Newmarket on Fergus, County Clare, in the West of Ireland. The castle is about 33 kilometers (about 20 miles) northwest of Limerick and about 72 kilometers (about 45 miles) south of Galway.

How To Get There: Dromoland Castle is 13 kilometers (about 8 miles) from Shannon Airport. The hotel is on a sign-posted road off of Ennis Road (R-471/R-458).

When: Open year-round; peak season is June and July. 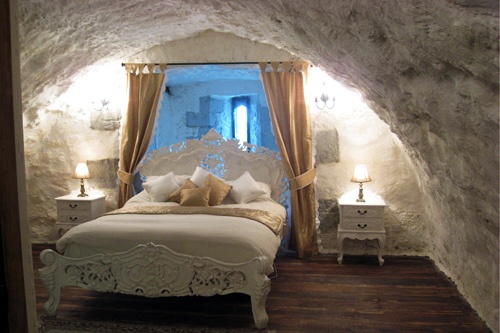 Turin Castle fell into ruin until 1997, when it was restored. The original structure remained intact over the years, so many medieval features still endure. Newer features include a wide-screen television hidden by a tapestry and a secret room behind a faux bookcase.

Where: Turin Castle is in Kilmaine, County Mayo, in the west of Ireland. Galway city is about 40 kilometers (about 25 miles) south.

How To Get There: Kilmaine is 122 kilometers (about 76 miles) from Shannon Airport. Turin Castle is on Turin Avenue, off of N-84.

When: Open year-round; there are over two thousand trees on the grounds, so spring and summer are great seasons for nature lovers to visit.

The five-bedroom castle sleeps up to 12 people. 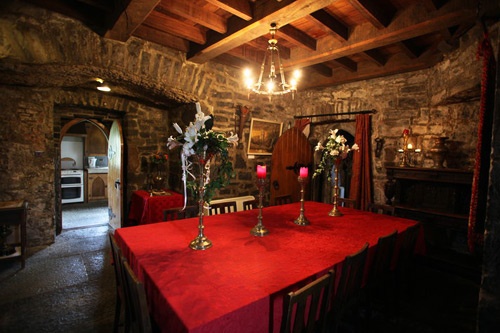 The original internal and external design has been maintained (with modern conveniences incorporated discreetly), allowing the castle to be officially listed as a historical and protected property with the Irish government. The five-story stone castle has even kept its original dungeon.

Where: Ballyhannon Castle is in Quin, County Clare. Quin is about 72 kilometers (about 45 miles) southeast of Galway city.

How To Get There: Ballyhannon Castle is about 16 kilometers (about 10 miles) from Shannon Airport. From the N-18, take exit 11 towards Quin and travel on Quin Road (L-2148) for about half a mile.

When: Castle rentals are available year-round; the spring and summer seasons are the most popular.

Price: Together, the castle and carriage house sleep about 20 guests. The castle does offer specials and deals (particularly for honeymooners), so it's best to contact the owners for rates. 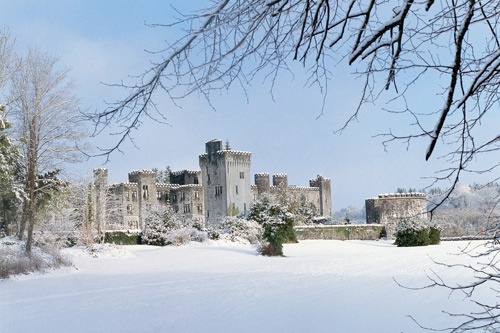 Courtesy of The Leading Hotels of the World
Ashford Castle, County Mayo
What: Originally built by the de Burgo family, this 13th-century castle was transformed into a hotel in 1939. Despite numerous renovations to ensure the property meets luxury standards, the castle maintains the feel of its aristocratic heritage. The 83 guest rooms (including six staterooms and five suites) overlook 350 acres of gardens and woodlands along the northern shore of Lough Corrib. Each room is decorated with regal antiques; the staterooms all feature original fireplaces. Guests can enjoy a range of activities, including falconry, golf, fishing, cycling, clay pigeon shooting, and archery.

It's no surprise that the five-star Ashford Castle has seen its fair share of aristocrats and celebrities. It was once the country home of the Guinness family; Pierce Brosnan held his wedding at the estate. Celebrity guests have included John Travolta, Princess Grace and Prince Rainier of Monaco, Duke and Duchess of Luxembourg, John Wayne, Johnny Cash, Fred Astaire, U2, and Barbra Streisand.

Where: Ashford Castle is in Cong, County Mayo, in the west of Ireland. Cong is about 41 kilometers (about 25 miles)northwest of Galway city.

How To Get There: Ashford Castle is 123 kilometers (about 76 miles) from Shannon International Airport. The castle is at the intersection of R345 and R346.

When: Open year-round, with seasonal packages.

Photo Caption: The snow-covered Ashford Castle in County Mayo. Courtesy of The Leading Hotels of the World 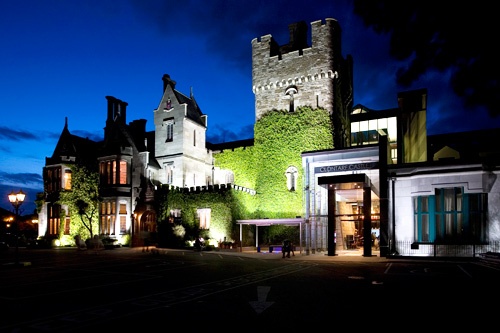 Courtesy of Clontarf Castle
Clontarf Castle, Near Dublin
What: The Clontarf area of Dublin holds a particularly important place in Irish history, thanks to the epic Battle of Clontarf in 1014 when Brian Boru, the High King of Ireland, defeated Mael Morda, King of Leinster. After the battle, Boru was later killed on what is now the site of Clontarf Castle. Hugh de Lacy, Lord of Meath, built the castle in 1172 as a form of protection for Dublin. The structure was rebuilt in 1837. In 1998, it reopened as a four-star hotel.

Where: Clontarf Castle is in Clontarf, which is in the suburbs of Dublin. The castle is about 5 kilometers (about 3 miles) from Dublin's city center.

How To Get There: Clontarf Castle is about 15 kilometers (about nine miles) from Dublin Airport. The hotel is on Castle Avenue, off R-105.

When: Open year-round; summer is the busiest season, so plan to book as early as possible. 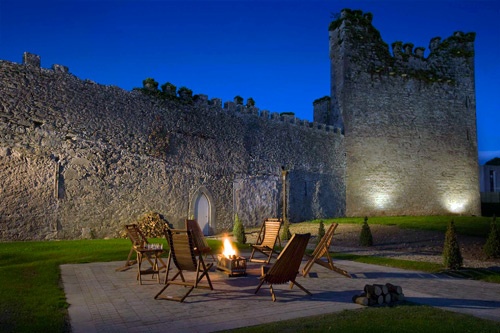 Courtesy of the Dromoland Collection
Castlemartyr Resort, County Cork
What: Castlemartyr Resort sits next to the ruins of Castlemartyr Castle, a 1210 castle built by Richard Earl de Clare (also known as Strongbow). The castle and surrounding lands belonged to the Knights Templar. Historical ring forts and mounds surround nearby Castlemartyr village, which can be traced back to the Bronze Age.

The country manor house now contained within the resort was built in the 17th century by the first Earl of Cork. Castlemartyr has a total of 109 guest rooms, 11 of which are in the manor house.

Among the diversions offered by the resort, guests can enjoy pony and trap outings with the estate's ponies, fishing, archery, cycling, golf, and the croquet lawn. The resort's resident dogs -- local Irish setters named Earl and Countess -- often join guests for walks on the nature trails.

Where: Castlemartyr is in Castlemartyr, County Cork, in the south of Ireland. It is 32 kilometers (about 22 miles) east of Cork city.

How To Get There: Castlemartyr is about 155 kilometers (about 96 miles) from Shannon Airport. The resort is on Ladysbridge Road, off N-25.

When: Open year-round, but the best times to visit are April through November. June and July are especially busy and can be more difficult to book. 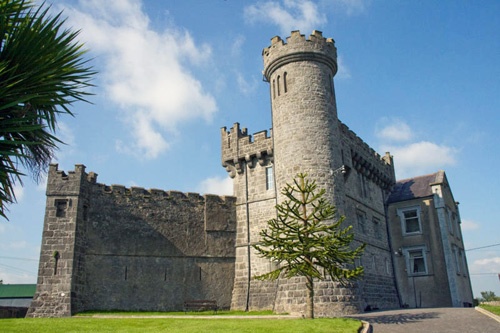 Courtesy of Carrigeen Castle
Carrigeen Castle, County Tipperary
What: For something truly different, consider staying in an old prison castle (also known as a bridewell). A bridewell was a small town jail that temporarily housed prisoners. Cahir Bridewell (now called Carrigeen Castle) opened in 1816, and originally consisted of five cells, two day rooms, two keeper's rooms, and two exercise yards. In 1849, the bridewell was renovated to include eight cells -- four for men, three for women, and one for drunk or rowdy prisoners.

The castle became a family-run bed and breakfast in 1976. Thousands of guests -- including some notable Irish politicians -- have since stayed at the renovated bridewell.

Where: Carrigeen Castle is in Cahir, County Tipperary, in the south of Ireland. The nearest cities are Limerick (about 63 kilometers or 39 miles) and Cork (about 77 kilometers or 48 miles).

How To Get There: Cahir is about 100 kilometers (about 62 miles) from Shannon Airport. Carrigeen Castle is on Mitchelstown Road, off of R-668.

When: Open March 1-Oct. 31, with some flexibility on either end. June, July, and August are peak times. 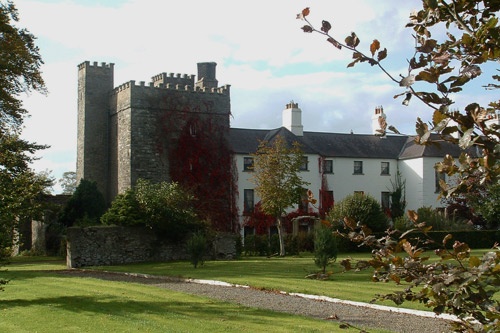 After maintaining the castle as a private residence proved too expensive, Barberstown Castle became a hotel in 1971. Eric Clapton bought the property in 1979, selling it to its current owner, Ken Healy, in 1987. Healy renovated the castle hotel into a 59-bedroom hotel. He lives on the four-star property and remains involved in running the castle day to day.

Where: Barberstown Castle is in Straffan, County Kildare, about 30 kilometers (about 19 miles) west of Dublin.

How To Get There: Barberstown Castle is about 40 kilometers (about 25 miles) from Dublin Airport. The castle is on Barberstown Road, off of R-403 and R-406.

When: Closed around Christmas and each January; for the past few years, April and May have had the best weather in the region.