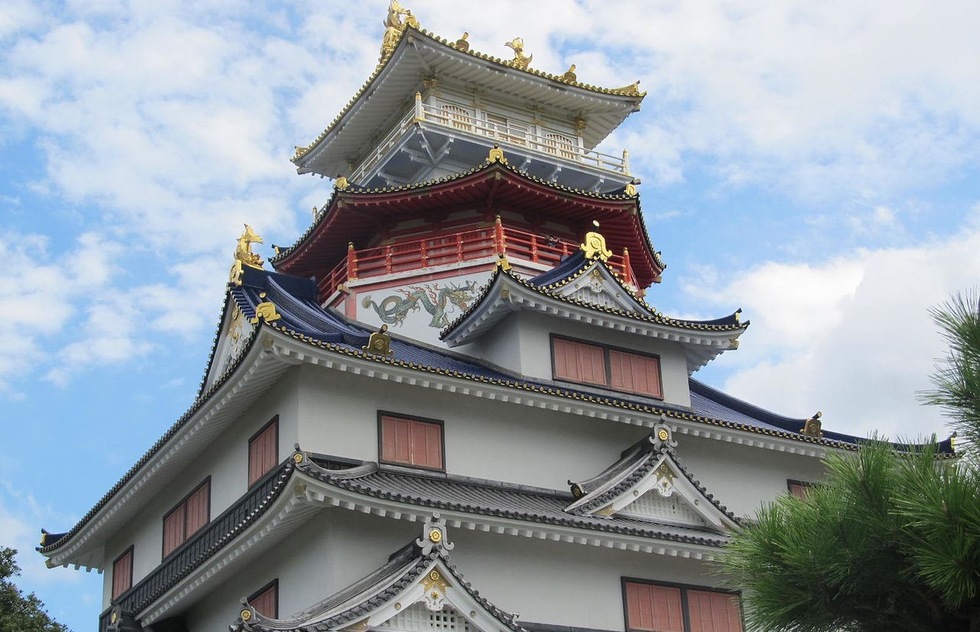 By Beth Reiber
Most visitors to Japan have Tokyo and Kyoto on their itineraries, as well they should. But just a short detour from that well-traveled route is Ise-Shima National Park, easily reached from Osaka or Nagoya. Hugging the rugged, saw-toothed coastline of Shima Peninsula, the park and its surrounding area are home to Japan’s most important Shinto shrine, established an astounding 2,000-some years ago. With its many coastal cliffs, caves, inlets, and islands, Shima Peninsula is also renowned for its thousands of pearl-cultivating rafts, plus many attractions geared toward families, including an aquarium and theme parks. Ise-Shima may not be well known outside Japan, but it should be. Read on to find out more.

Beth Reiber is the author of Frommer's EasyGuide to Tokyo, Kyoto and Western Honshu. 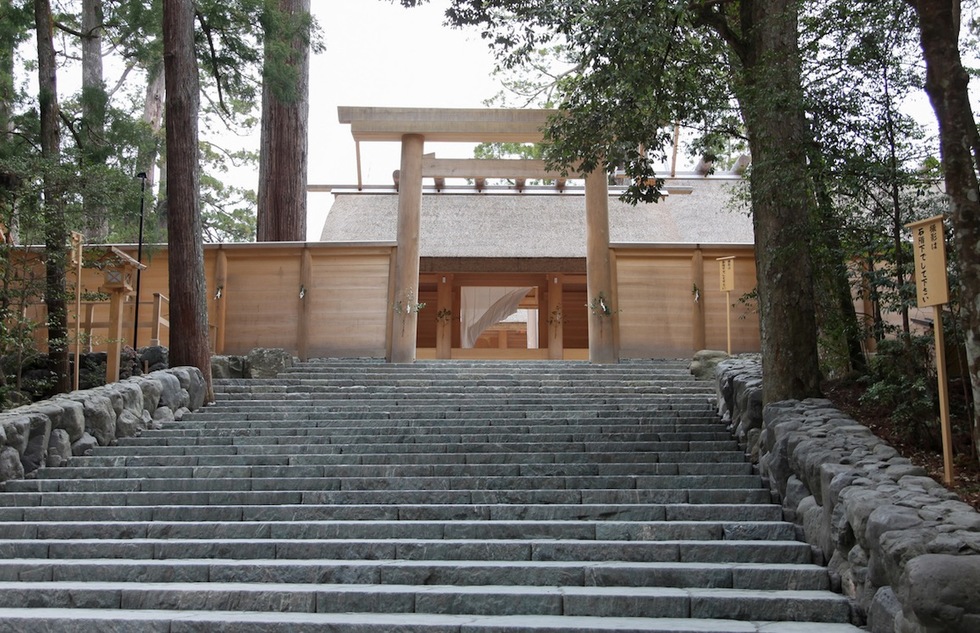 Beth Reiber
Ise Jingu Grand Shrines
Because it was founded some 2,000 years ago to honor the legendary ancestress of the Imperial family, Ise Jingu is the most revered shrine in the country, the center of the very soul of the Japanese people. Shrouded by a dense forest of Japanese cypress, the complex is home to 125 shrines, of which the Naiku (Inner Shrine) is the most important. It’s reached by crossing the arched Ujibashi bridge, meant to symbolize leaving daily life behind and entering the spiritual world. The Naiku is constructed of plain cypress wood topped with a thatched roof—the purest style of Shinto architecture. The shrine is so sacred, in fact, that mere mortals are kept at a distance by rows of fences, affording only a glimmer of a glimpse. But that hasn’t stopped the faithful from making pilgrimages to Ise Jingu throughout the centuries. Nevertheless, the Naiku is never older than 20 years. That’s because every two decades, in a highly organized ritual, it's completely torn down and rebuilt exactly as it was, thereby assuring that traditional architectural expertise is passed from generation to generation. The next rebuilding will take place in 2033. (Train station: Ise-Shi) 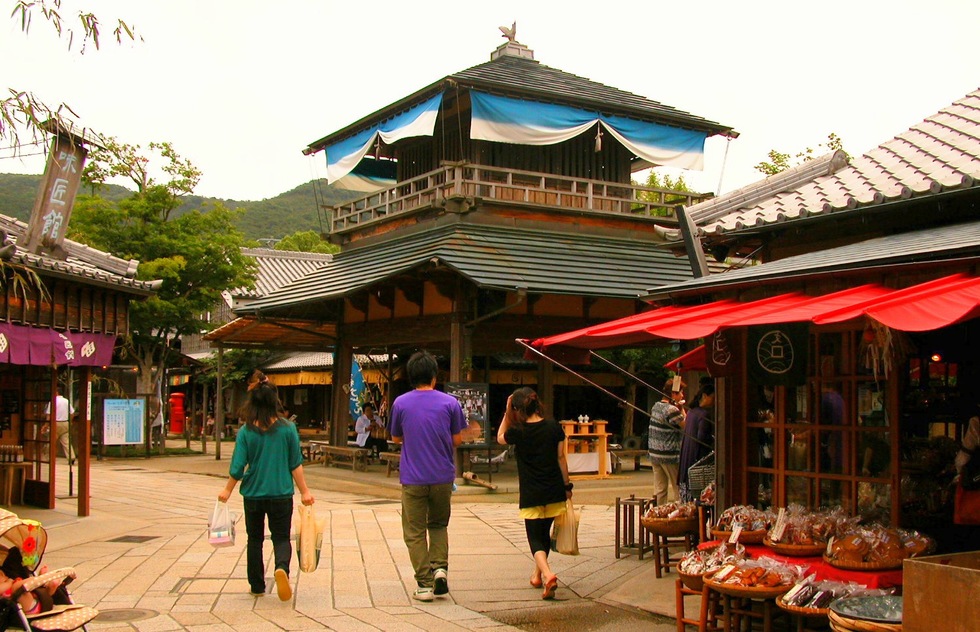 Beth Reiber
Oharai-machi & Okage-yokocho
In the town of Ise, just a short walk from the elegant Ujibashi bridge, is the historic main street of Oharai-machi, once the main pilgrimage route leading to Ise Jingu. During the Edo Period (1603–1867), the shogun strictly controlled travel, making a pilgrimage to Ise a once-in-a-lifetime opportunity for most Japanese. As much as a fifth of the population is estimated to have taken advantage of that chance by hiking with fellow villagers to Ise. The historic street, lined with Edo-era wooden buildings and faithful reconstructions, serves today’s pilgrims with restaurants and shops, while the adjacent Okage-yokocho is a re-created village with more eateries, teahouses, and shops selling Japanese traditional toys, wind chimes, food items, and more. The most popular souvenir is Akafuku mochi, a rice cake topped with a sweet red bean paste, sold to worshippers on their way to Ise Jingu for more than 300 years. (Train station: Ise-Shi) 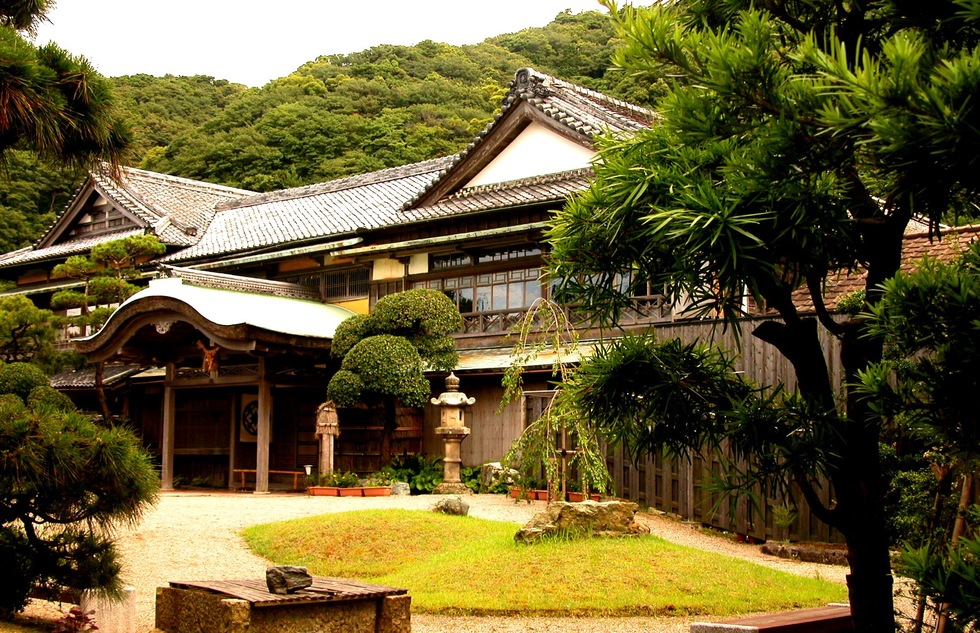 Beth Reiber
Hinjitsu-kan
This majestic traditional inn was built in 1887 to house important visitors to Ise Jingu Grand Shrines, including the Imperial family. Sadly, the inn closed in 1999, but it was preserved as a museum. After entering a side entrance (the main entryway is reserved for Japan’s royal family), you’ll find yourself in what could be considered the epitome of Japanese traditional architecture, with winding corridors leading to tatami rooms. Most impressive are the Golden Hall with its 120 tatami mats, and the elaborate Goten, where VIPS of yore stayed with views over the landscaped garden toward the sea. Hinjitsu-kan faces Futami-ga-ura Beach, popular during the Edo Period as a place for pilgrims to wash and purify themselves before visiting the shrines. (Train station: Futami-no-ura) 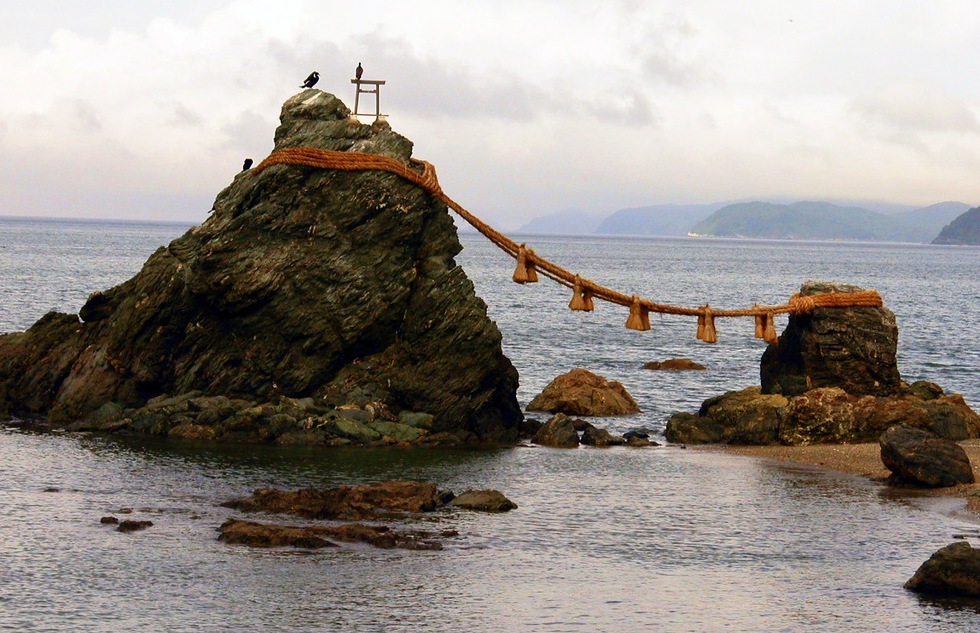 Beth Reiber
Meoto-iwa – Wedded Rocks
This site has long been considered sacred by the Japanese and is one of the region’s most photographed places. Joined by a 35-m- (115-ft.-) long ceremonial rope made of straw, the large and small rocks jutting out of the sea just offshore from Futami-ga-ura Beach are known as the Wedded Rocks, a symbol of a good and harmonious marriage. The most auspicious time to view them is at sunrise during the summer solstice, when the sun comes up between them. Unfortunately, that happens as early as 4am. Nearby is Futami Okitama Shrine, where you'll see numerous frog figurines representing one of the shrine's auspicious symbols. (Train station: Futami-no-ura) 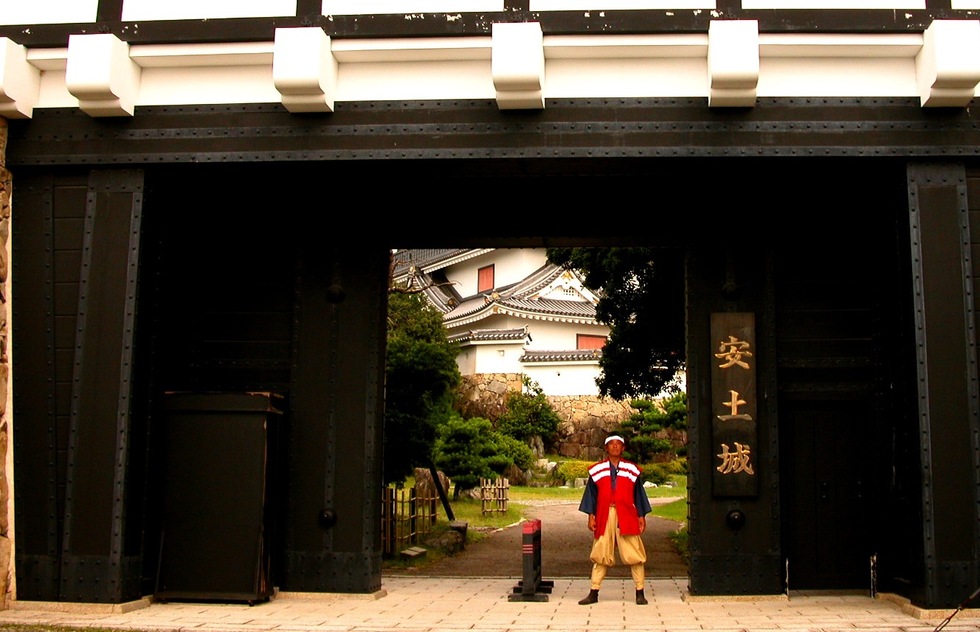 Beth Reiber
Ise Azuchi Momoyama Bunkamura
For families, a visit to one of Japan’s many period theme parks is a great antidote to temple and shrine fatigue. This one centers on the Age of the Warring States (1477–1573), when local warlords struggled for supremacy, and the Azuchi-Momoyama Era (1573–98), when Oda Nobunaga gained control of the land and put an end to the civil war. Staff members are dressed in period costumes and the park looks just like a movie set. Even visitors can look the part in rental costumes ranging from samurai and geisha to ninja. Attractions include a theatre with a ninja show, a haunted temple, a trick maze, and a reconstructed Azuchi Castle originally built by Nobunaga in 1579, with a top-floor room lined with real gold and views of Ise Bay. There are no thrill rides here, just old-fashioned offerings like the bow-and-arrow shooting range. (Train station: Futami-no-ura) 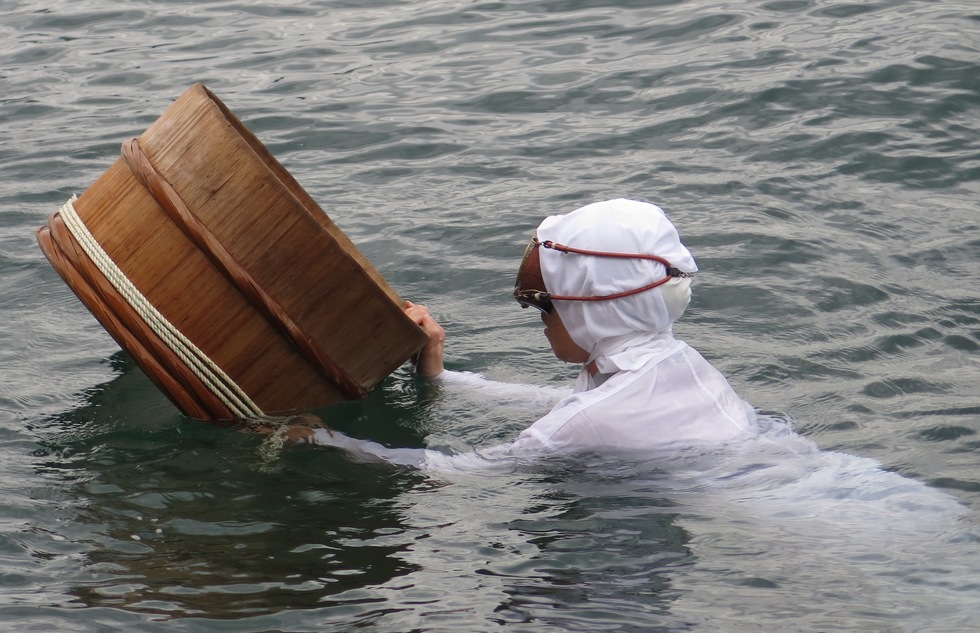 Beth Reiber
Mikimoto Pearl Island
Ise-Shima is the birthplace of pearl culturing, a technique developed by Kokichi Mikimoto in 1893 after five years of trying to induce pearls in oysters. His discovery took place right on this small island, now known as Mikimoto Pearl Island, which is joined to shore by a pedestrian bridge. You’ll learn all you’d ever care to know about pearls, from how they’re produced by inserting an irritant into a live oyster’s shell to how they’re selected for stringing. You'll also see fantastic antique jewelry and artwork incorporating them, like a Liberty Bell facsimile with 12,250 pearls made for the 1939 World’s Fair in New York City. There are also live demonstrations of ama female free divers, who once played an integral part in pearl cultivation. Because most ama have been diving since they were teen-agers and are now in their 60s or older, their number dwindles each year as younger Japanese women opt for other occupations. Naturally, there’s also a shop where you can buy strung pearls, earrings, cufflinks, and other souvenirs. (Train station: Toba) 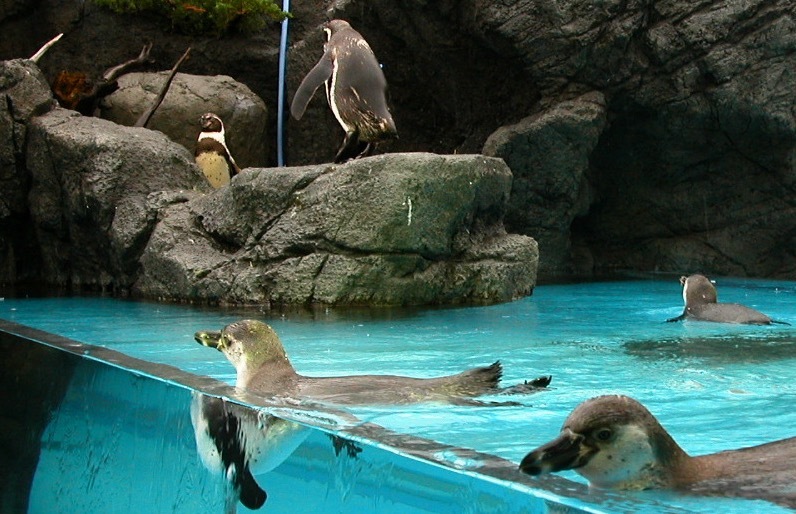 Beth Reiber
Toba Aquarium
As you'd expect from an island nation, Japan has more than its fair share of aquariums. This is one of the largest, with more than 20,000 sea and river creatures from 1,200 species divided into various habitats. Especially noteworthy is the display of marine animals from Ise Bay and the seas around Japan, including giant spider crabs and the finless porpoise. A tropical rainforest exhibit is home to dugongs and Japan’s only captive African manatees. Sharks, dolphins, jellyfish, and seals also live here, and sea lions perform several times daily. (Train station: Toba) 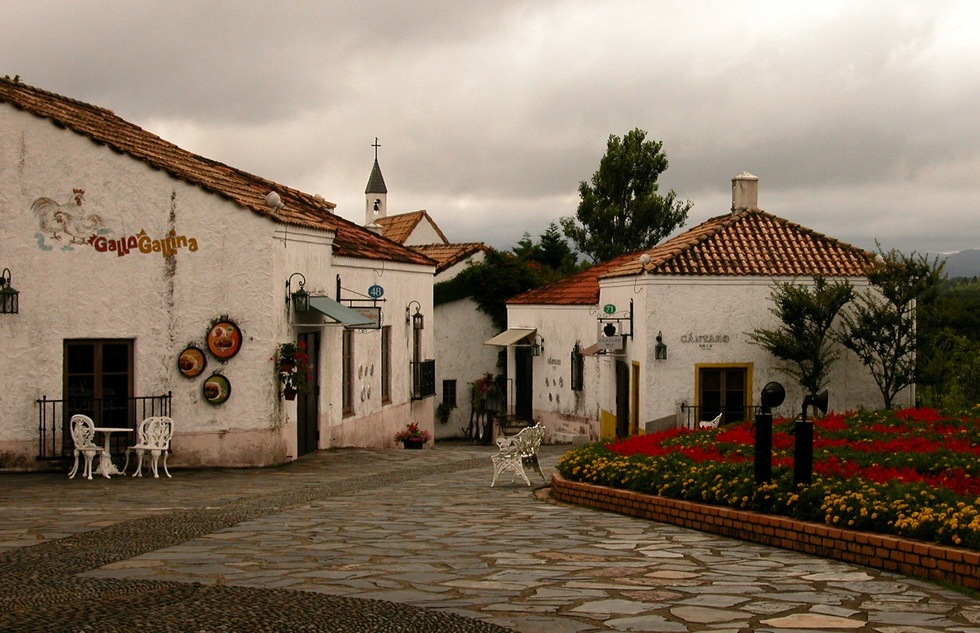 Beth Reiber
Shima Spain Village
This amusement park (also known as Parque Espana) is designed to look like a Spanish village, complete with shows, restaurants, shops, and attractions for all ages, plus roller coasters (the Pyrenees is incredibly fast), kiddie rides, and a 360-degree 3-D theater. Live entertainment includes a circus act, a musical production, a flamenco show, and a parade, while the Xavier Castle Museum presents Spanish history and art, from a model of the Santa Maria of Christopher Columbus fame to replica prehistoric drawings of Altamira Cave. This is a great place for families with younger kids, and if you go in the off season or on a weekday, you’re likely to have the whole place to yourselves. (Train station: Ugata, followed by a 13-minute bus ride) 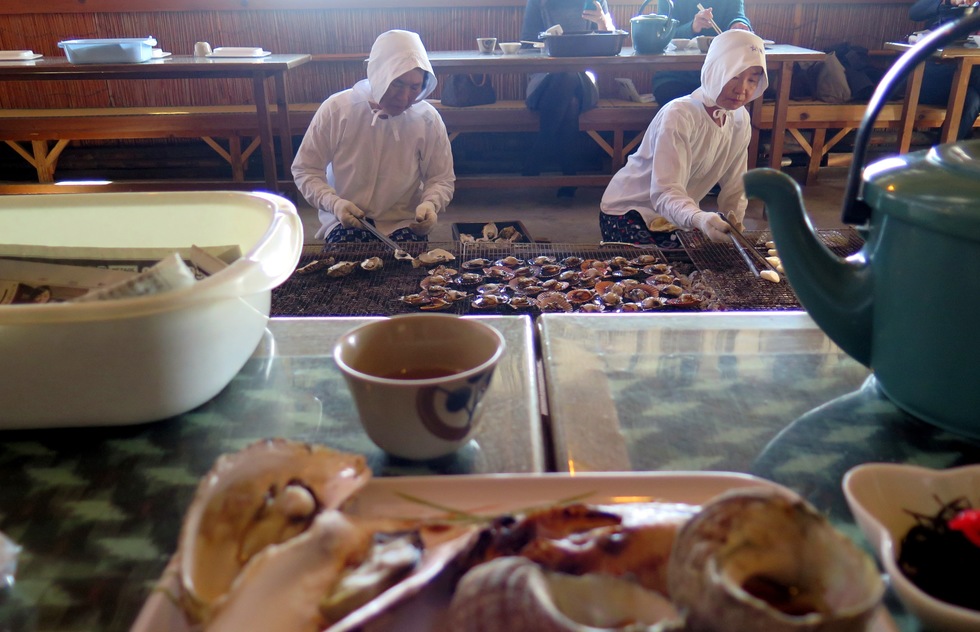 Beth Reiber
Ama Hut Dining Experience
Japan has a history of the ama (which translates as “sea woman”) stretching back almost 3,000 years. And almost half of the country’s some 2,000 female divers live in the Ise-Shima area. Through the centuries, they've dived for abalone, seaweed, sea cucumbers, octopus, lobster, and other edible creatures, and in the early years of pearl cultivation they were indispensable for retrieving oysters. An ama can hold her breath for up to one minute and dive to a depth of about 3 m. (about 9 ft.). While her traditional dress used to be white to protect against sharks and sunburn, today she wears a wetsuit. There are ama huts throughout Ise-Shima, where local divers store belongings and gather for warmth and camaraderie. A handful of huts (pictured) also offer set meals of the daily catch, which can range from turbo shell and clam to sea urchin, seaweed, Ise lobster, and abalone, cooked over a charcoal grill. For more information, go to www.osatsu.org/en/. (Train station: Toba, followed by a 45-min. bus ride to Osatsu-cho village)

For full coverage of Western Honshu and other popular regions of Japan, check out our popular guidebook Frommer's EasyGuide to Tokyo, Kyoto and Western Honshu.
Local Experiences