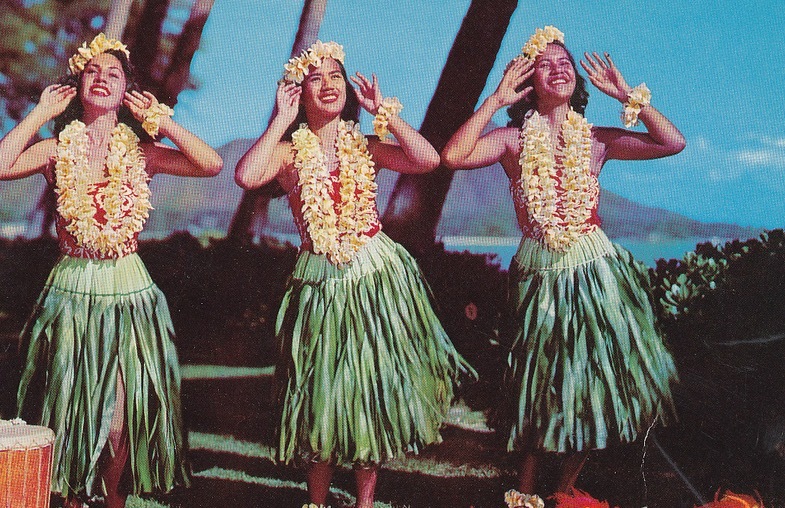 Look, we’re not perfect. We here at Frommer’s try our best to be unswervingly fair, accurate, and compelling, but as long as guidebooks are written by humans, they’re liable to contain the occasional lapse in judgment, display of unconscious bias, or well-meaning but insensitive cultural commentary. The danger of that last one is especially pronounced in travel, which after all is about encountering cultures different from your own.

Of course, it’s easier to see these things with the benefit of hindsight, especially in cases where attitudes have changed and perspectives have broadened. We took a trip into the oldest section of our archives to find 10 questionable recommendations from the first decade or so of Frommer’s (1957-70). Consider this a long overdue correction. 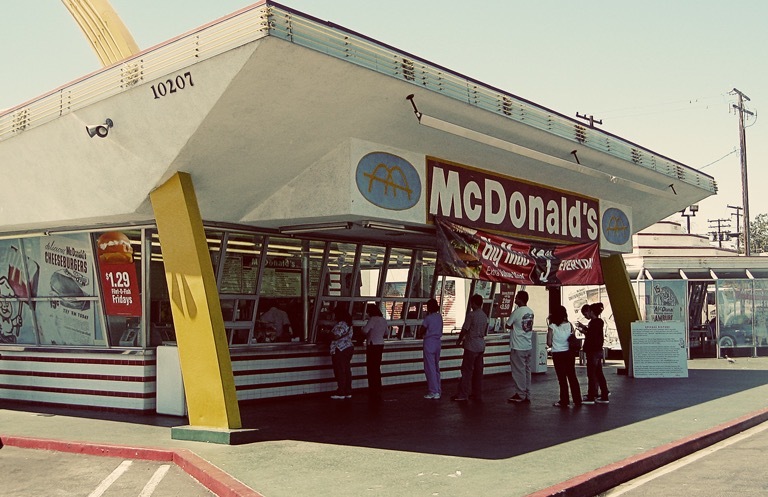 What We Said: “The absolutely lowest prices for edible food anywhere in the city are found at the McDonald’s drive-ins. Hamburgers cost 15¢, french fries are 15¢, cheeseburgers 20¢, and milk shakes 22¢. Any place that claims they can fill up a family of five for $2.65, is a friend of ours.” —from Washington, D.C. on 5 Dollars a Day, 1965

On Second Thought: Sure, the prices are cheap. But we don’t need to tell you that eating at a giant multinational fast-food chain will do virtually nothing to acquaint you with a place’s local flavor, right? RIGHT?? (In our defense, McDonald’s was still a relatively new phenomenon in 1965—a mere 10 years into owner Ray Kroc’s campaign to take over the world. So maybe we were actually ahead of the curve?)

Photo: The oldest operating McDonald's restaurant, located in Downey, California. It opened in 1953. 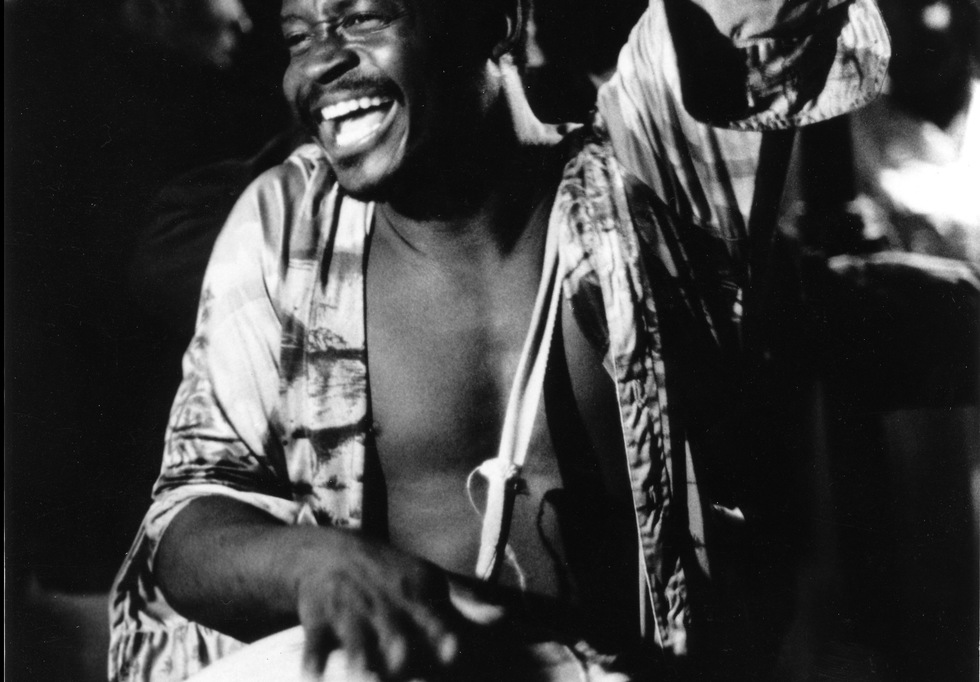 What We Said: “Voodoo ceremonies [in Haiti] are a series of hypnotic and gyrating dances that are supposed to remind the natives of their ancestors in Africa. Voodoo has so captured the imaginations of the backward mountain people that it has become for some of them a sort of opiate and a compelling way of life. The bongo drums beat in a uniform and familiar rhythm. The dancers have a leader who directs and channels the emotional pitch of his followers. The chanting in the background acts as a catalyst for reaching the climax. Most ceremonies end with the participants drinking the blood of a chicken and, completely exhausted, falling on the ground into a mesmerized sleep. The most convenient, authentic Voodoo can be seen at the Coq D’Or, on the exhibition grounds near the Theatre Verdure [in Port-au-Prince].” —from Miami and the Caribbean on 10 Dollars a Day, 1961

On Second Thought: "Backward mountain people"? We apologize, far too late, for the wrongheadedness of this one. It’s interesting to note, however, that tourism in Haiti was stronger in the early ‘60s than today, following a period of political instability in the last decades of the 20th century. Haiti's neighbor, the Dominican Republic—currently a Caribbean heavyweight in travel—isn’t even mentioned in our 1961 guide.

Photo: a drummer at a Haitian vodou dance in New York City during the early 1980s 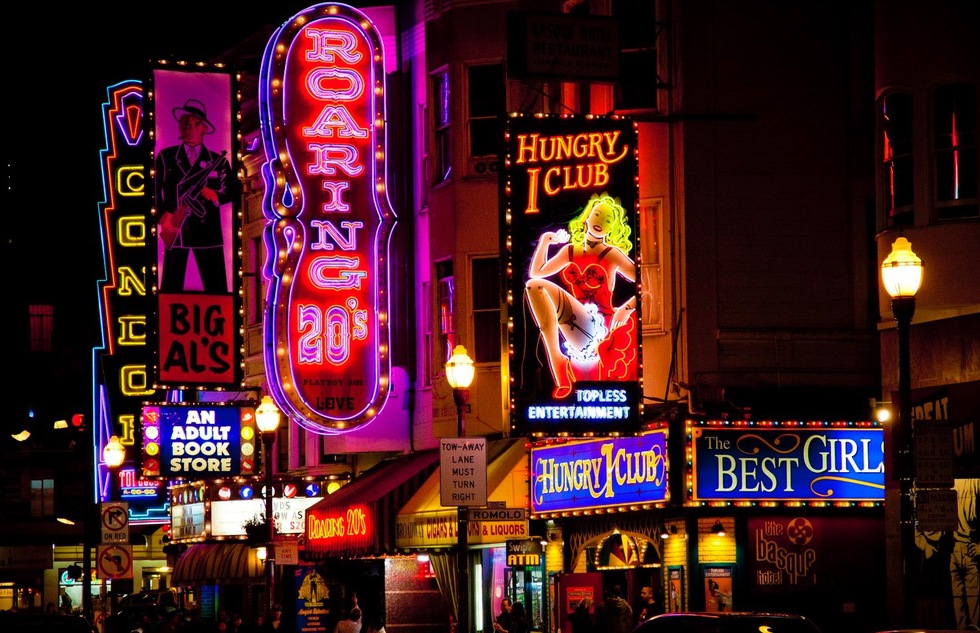 What We Said: “The really swinging girls in San Francisco these days are to be found in a couple of elaborate bars called the Roaring Twenties (807 Montgomery) and Gold Street (56 Gold Street, just off Montgomery). The girls really are on swings, and several times each night they zoom over the heads of the drinkers below, flashing their pretty legs, covered with black-net nylons, forcing even the most blasé types to pause from imbibing to admire the view. Although Gold Street has the prettier girls, the Roaring Twenties is much the more elaborate of the two. Here, two swings are almost constantly in action, the scantily-dressed waitresses each taking turns, and extra refinements include a fireman’s pole down which the girls come sliding every now and then.” —from Los Angeles, San Francisco and Las Vegas on $5 and $10 a Day, 1962

On Second Thought: Those who go to places like this can do their own objectifying of the staff. We’ll stay out of comparing women's looks.

Photo: strip clubs in San Francisco's North Beach (the Roaring 20s club you can see here isn't the same one mentioned above; the older one, at a different address, is now closed) 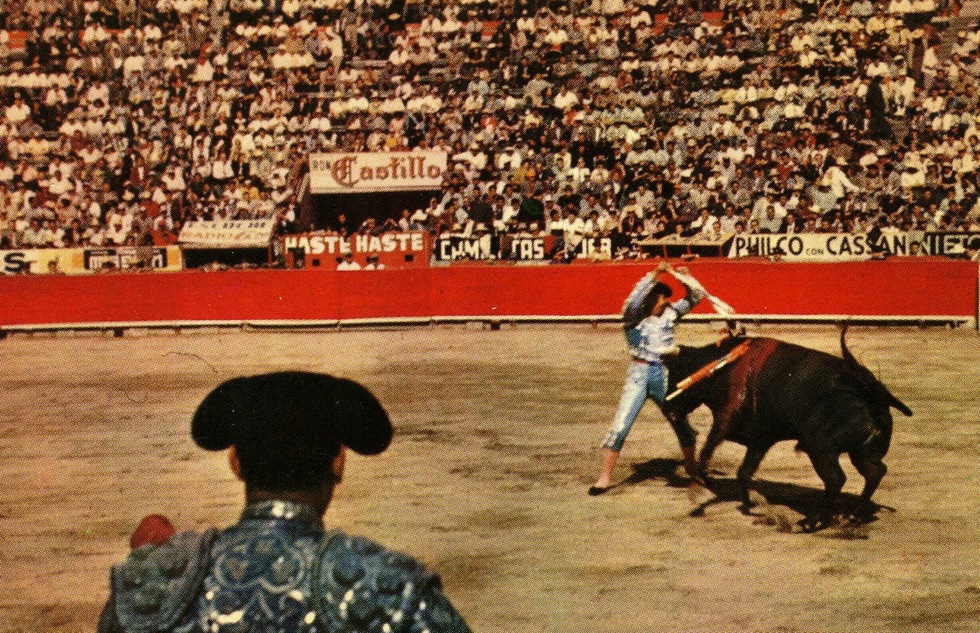 What We Said: In our earliest, just-the-facts listings for cockfighting in Puerto Rico (1961) and bullfighting in Mexico (1960), you’ll look in vain for signs of concern for the animals killed as part of these entertainments. Spain on 5 Dollars a Day (1966) acknowledges that many tourists consider bullfighting “cruel and shocking” but nevertheless asserts, “You haven’t really experienced Spain until you’ve been to a bullfight.”

On Second Thought: With regard to bullfighting, we could have at least pointed out that despite its much ballyhooed role in the culture of Spain and its former colonies, there are plenty of Spaniards—and Mexicans, too—opposed to the sport (in fact, it’s banned in the Spanish region of Catalonia). We doubt you’d argue that those natives haven’t “really experienced” their countries. 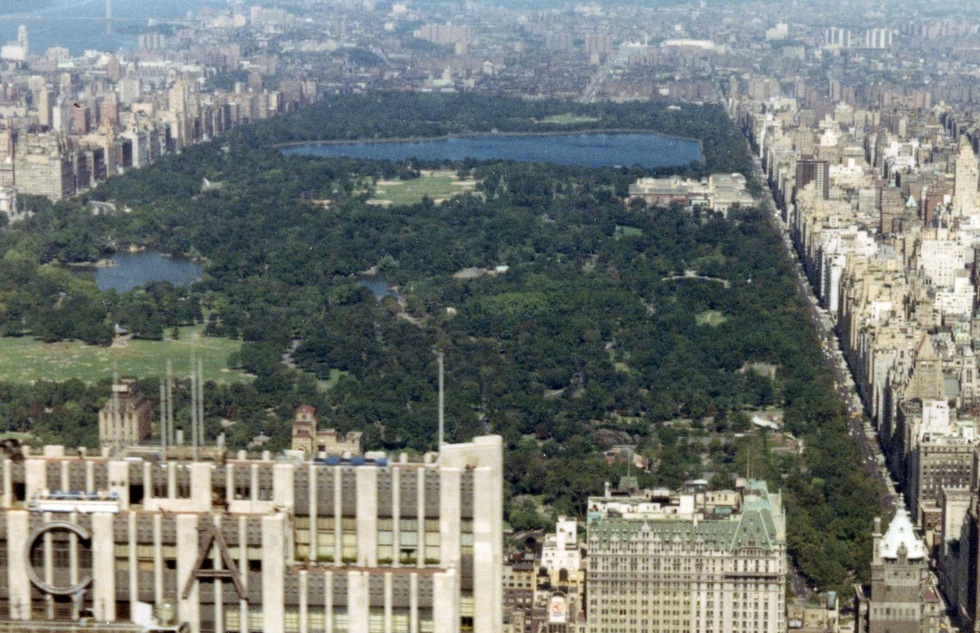 What We Said: The first edition of New York on 5 Dollars a Day, from 1961, dispenses with Central Park in a single paragraph that begins, “Go here only in the summer months, when there’s safety in numbers.” To be fair, New York City was at the beginning of its crime-ridden era—which would only get worse in the ‘70s.

On Second Thought: Crime in New York dropped dramatically in the ‘90s, and it has stayed down (though you should remain on your guard in any big city you visit). As for Central Park, it’s one of the world’s greatest urban green spaces and belongs on the short list for the title of Best Thing About Manhattan. In the latest edition of Frommer’s EasyGuide to New York City, the Central Park section takes up six full pages. 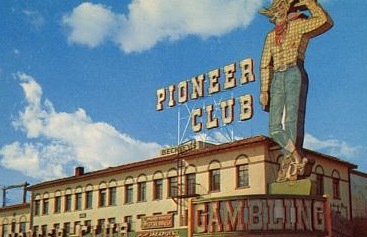 What We Said: “The Pioneer Club (25 Fremont) [in Las Vegas] gives away midget slot machines that work, and you can also buy these at many souvenir stores. Many of them are in the form of piggy banks; in some of the hotel lobbies you’ll see kids pouring dimes into their own piggy banks and pulling the levers. Nothing like getting the kids started off early.” —from Los Angeles, San Francisco and Las Vegas on $5 and $10 a Day, 1962

On Second Thought: Why stop there? Why not replace your kid’s Yahtzee set with a craps table? Or turn your toddler’s See ‘n Say into a roulette wheel? Or make your mommy-and-me yoga class into a Gamblers Anonymous meeting? 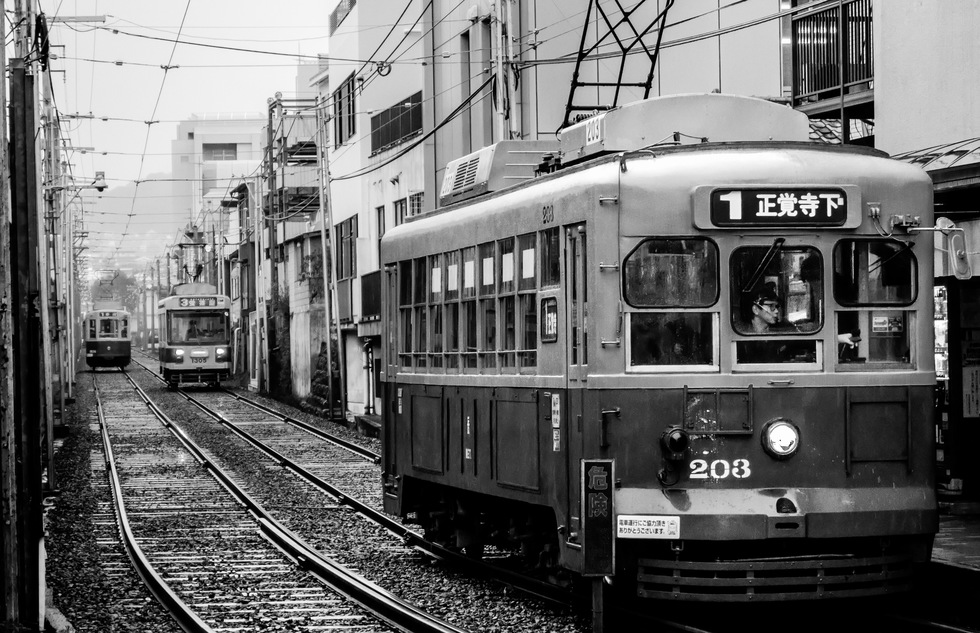 What We Said: “The maze of residential streets above Shianbashi [in Nagasaki] is quite fascinating. Along streets, lanes and alleys that are so narrow that you’ll be almost in the living room of the houses to each side, is where the real life of the lower middle classes is lived. A gnarled old lady, seated naked on a small bath stool, scrubs herself in a dark alley, while her family sprawls around on the tatami mats of the living room, watching television. A young woman, about to undress, stops startled as she catches sight of a gaijin [foreign] face passing the window.” —from Japan on 5 and 10 Dollars a Day, 1969

On Second Thought: Um, you’d be startled too if some tourist popped his head into your window one night while you were standing around in your underpants. 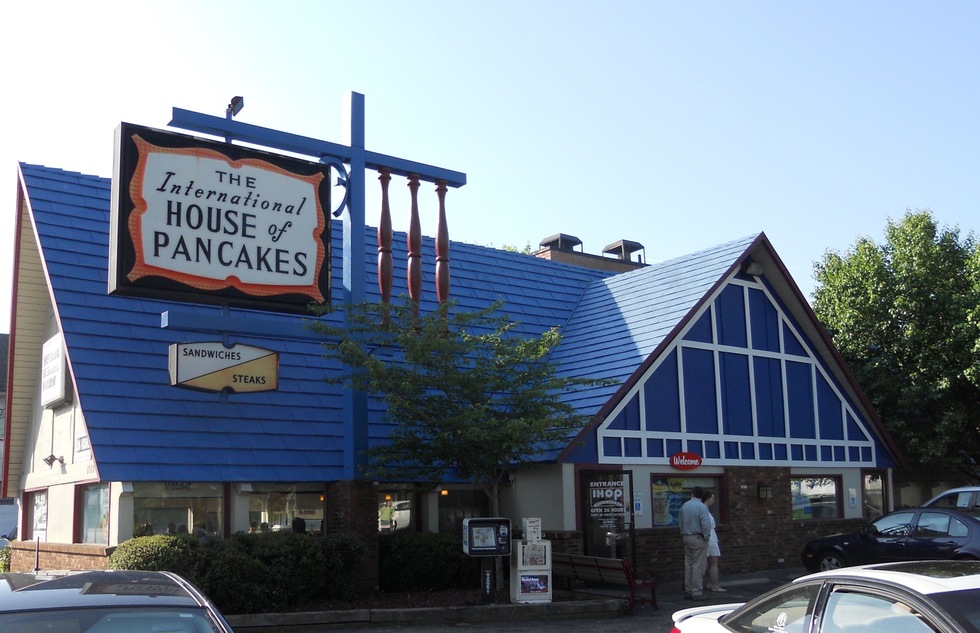 What We Said: “Everybody’s tried pancakes, but how many people are familiar with the delicate flavors of orange-pineapple pancakes or coconut pancakes or pancakes made of buttermilk? These and dozens of others (chocolate, blueberry, low-calorie, Danish, Hungarian, etc.) can be sampled at the International House of Pancakes (Sunset & Orange [in Los Angeles]), which will eventually be supplemented by many other branches.” —from Los Angeles, San Francisco and Las Vegas on $5 and $10 a Day, 1962

On Second Thought: See previous McDonald’s slide. But at least the IHOP we recommended here (and there’s still one at this address, by the way) was one of the first—though not the first; that one was in L.A.’s Toluca Lake neighborhood, and it’s gone now. Today IHOP has hundreds of restaurants across the globe. We knew how to spot a trend early on. 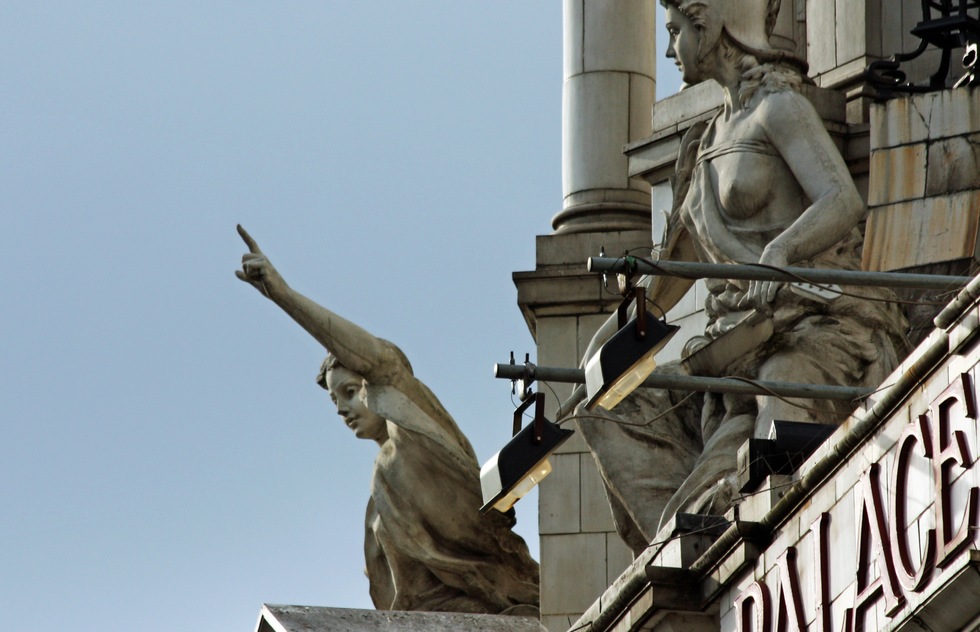 What We Said: “Victoria Palace, Victoria Street, S.W. 1, across the street from Victoria Station [in London]. This vaudeville emporium offers minstrel shows and sells seats from six shillings (84¢) to 15s ($2.10). Usually, two shows are presented nightly.” —from England on 5 and 10 Dollars a Day, 1966

On Second Thought: The Black and White Minstrel Show was a hugely popular, incredibly offensive variety program that ran on the BBC from 1958-78 (!). Featured music and comedy acts included performers in blackface behaving in a stereotypical manner. The stage show ran at the Victoria Palace Theatre for a decade starting in 1962. Sadly, it appeared in our book’s listings.

As it happens, starting in November 2017, the Victoria Palace will be the West End home of the Founding Fathers hip-hop musical Hamilton—a production about as far in spirit from The Black and White Minstrel Show as you can get.

Photo: statues on the Victoria Palace Theatre in London 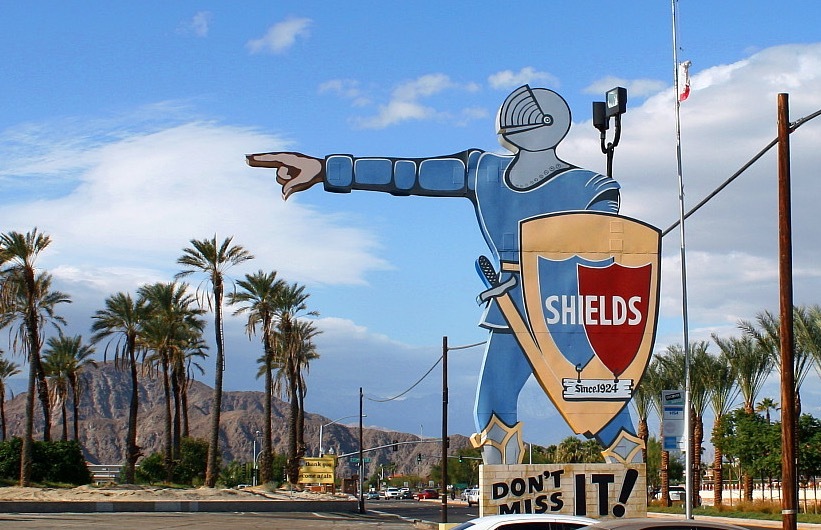 What We Said: “There are numerous date gardens out along Route 111, which leads back into Palm Springs, but none is so insistent in its advertising as Shields Date Gardens. Here, the ubiquitous billboards inform you, can be seen ‘Romance and Sex Life of the Date,’ which is a series of incredibly boring film slides, each of which is on the screen for so long that one can be pardoned for falling asleep out of sheer inertia. The slides are accompanied by an opinionated and horribly commercial commentary by a gentleman who talks at great length about what he personally has done for the date industry. Don’t be seduced by the cute signs; it isn’t worth the trouble of stopping to see.” —from Los Angeles, San Francisco and Las Vegas on $5 and $10 a Day, 1962

On Second Thought: After all these years, Shields Date Gardens in Indio, California, is alive and well and growing dates. Even the intriguingly titled movie about the fruit’s cultivation mentioned above is still being screened. In other words, the orchard has passed the test of time and we are prepared to amend our earlier assessment: By all means stop and see it.

Arts and Culture
Food and Drink